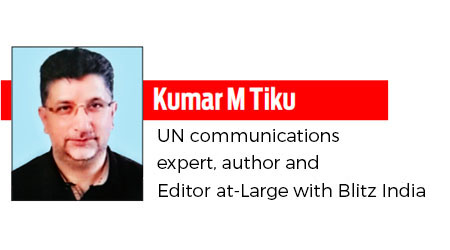 On this International Women’s Day 2022, as the mind trails to that defenceless girl-child on the cold streets of Ukraine or that shelterless woman just bombed out of her home, I ask myself what does the lofty world of the Sustainable Development Goals (SDGs) mean on the ground in the meanest streets of the world? More to the point, just which of the Goals truly speaks to women’s growing struggles and their search for equality in a highly violence-ridden and violations-driven unequal world stacked against them?

There is rather straightforward but somewhat anodyne Goal #5 for ‘Gender Equality. But it is not just Goals #5. A quick forensic audit of the SDGs reveals a telling reality. An overwhelming majority – as many as 11 of the 17 SDGs – and all the targets that each of these Goals embodies, would be hard to beat by 2030 without solid, discernible and quantifiable progress on the women’s peace and empowerment agenda.

Now think of Goals 1 to 8 and it is inescapable that you might see the face of a woman on each one of these Goals. From No Poverty (Goal#1), Zero Hunger (#2), Good Health (#3), Quality Education (#4), Clean Water and Sanitation (#6), Affordable and Clean Energy (#7), Decent Work and Economic Growth (#8), there cannot be a more potent way for clocking progress on these Goals than to engender each one of them.

Of course, Goals 16 (Peace, Justice and Strong Institutions) and Goal # 17 (partnerships for the Goals) that bring up the rear of the SDGs also provide a compelling strategy for the achievement of the Goals. But we have been stone-deaf and wall blind for generations to even take these strategies seriously. Adept at pretending the writing on the wall is hidden from plain sight.

We have been in denial for aeons, committed to doing nothing with the discredited evidence of patriarchy. Evidence has been all around us – the rubble of inequality pock-marking the face of humanity. For decades since that momentous day of 1910 when a brave woman in Europe proposed the observance of the Women’s Day in her fond search for solidarity across sexes around rights and dignity of women as the non-negotiable for peace and justice, we have had the means and the movements to tell us that a good starting point – indeed some would say the only way – to right the political economy of the discrimination is to embrace Equality as a non-negotiable.

The question is: shall we? In a world trumped by conflicts, divisions, atavistic passions, hegemonic designs and a generalised construct of power centred on arms and medieval gangsterism, will men of the human race ever cede space to women to give peace a real chance? The answer to that question forever ‘Blowin in the Wind’, as the great Dylan sang.

Violence upends everything. The battlegrounds keep shifting. In the decades gone by South Asia, Asia Minor, Central Asia, Middle East have all been happy hunting grounds for weapons, bombs and bullets manufactured in faraway master ganglands – often, and not without reason, otherwise referred to as the ‘superpowers’ – whose purse fattens by the day on arms sales and whose model of hegemony relies heavily on forever scouring new markets and prizing open old faultlines for conflict. Now, after a brief lull of uneasy peace that held precariously during the Cold War, the Balkanisation and all the tumult in the wake of mortal perforations in the so-called Iron Curtain, Europe is in a tangle again. Same methods, different places!

Violence upends everything. The battlegrounds keep shifting. In the decades gone by South Asia, Asia Minor, Central Asia, Middle East have all been happy hunting grounds for weapons, bombs and bullets manufactured in faraway master ganglands.

And so, as in Afghanistan earlier, or Yemen, or Syria, or Iraq, or Eastern Ethiopia, or Sudan, Libya, the Central African Republic, or Congo, the works, as soon as the bombs reign, appeals are yet again being made to protect civilian infrastructure in Ukraine – schools, water supply, health facilities – and to protect innocent women, children and all civilians from the worst impacts of the Open Season. Appeals for suspension of the ongoing military actions would facilitate humanitarian access to people who have been cut off after days of intense airstrikes and ground fighting.

But those are just pious homilies that busybodies must express to keep themselves in business. Humanitarianism is big business too. It feeds on Violence, the go-to sport of the Big Boys. The sport must go on. Epic displacement follows – providing ever-more fertile ground for violations of protection rights of innocent women and children. The SDGs be damned.

It must be all well and fine. Even karmic. After all, haven’t We the Patriarchs gotten away without ever letting women have their say in our relentless march towards individual and collective power that’s almost exclusively based on what the wag defines as the short-dick syndrome?

Don’t get me wrong. Across sport – our feisty girls just handed a memorable defeat to their archrivals across the border at the ongoing ICC Women’s World Cup in New Zealand–, politics, films and entertainment, fashion, fintech and the digital economy, farming, every cent of investments made in equal opportunity and women’s development is yielding an ounce and more of progress on making the world a happier and hope-filled place to live in.

But today, my thoughts meander back to the images from Ukraine where women have been feeling first-hand the devastating impact that war has on their families and their communities. Amidst the fighting and violence surrounding them, Ukrainian women have been taking care of their families and neighbours, with many of them having travelled over long distances to bring their children and their friends’ children to safety.

They continue to work under bombardment and indiscriminate shelling as doctors, nurses and other professionals provide essential services to their communities. Women human rights defenders, journalists, civil society activists and volunteers work tirelessly towards re-establishing peace and protecting the values for which the civilised world – if such a thing exists – stands. One can simply salute their determination, strength, and courage.

Meantime, here’s wishing you all a Happy International Women’s Day.

Women and sustainable development in India

Women and sustainable development in India