A pioneering figure in EV space 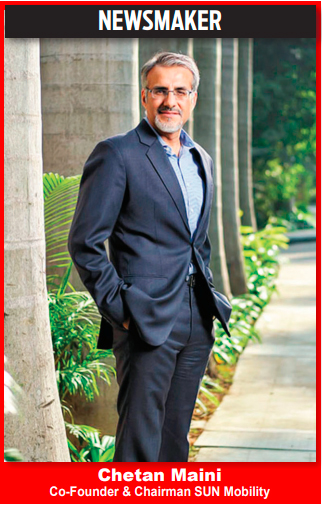 Holder of more than 30 global patents, Chetan Maini is a pioneering figure in the EV space and is credited with having built the country’s first electric car, Reva. Currently, the Co-Founder and Vice-Chairman of SUN Mobility, Maini has been in news recently, answering questions and addressing concerns about the Central Government’s soon-to-be-implemented battery-swapping policy.

Maini seems best placed to play a lead role in India’s e-mobility journey as he set up Reva Electric Car Company way back in 1994 and launched the country’s first electric car in a record time of two years. It was the world’s most affordable city electric car then. He expanded the business to London in 2004. After Reva joined hands with the Mahindra Group, Maini became the Chief of Technology & Strategy at Mahindra Reva. In July 2013, he became the CEO of the company.

Since 2016, Maini has also been the Director and co-promoter of Lithium Urban Technologies, an initiative to establish the infrastructure and service environment for shared electric-powered mobility, besides being a partner at Virya Mobility 5.0, owned by the Maini brothers. Virya focuses on investing and developing electric vehicle technologies, charging infrastructure, and services ecosystem.

Fifty-one-year-old Maini was born in Bengaluru to Sudarshan K Maini and Reva. His father is the founder of the Maini Group of Industries. He graduated in BSME from the University of Michigan and received a Master’s degree in hybrid electric technology from Stanford.

An investor and mentor of several clean-tech start-ups in the country, Maini was named the Young Global Leader at World Economic Forum 2011. Besides, the accolades earned by him include the Man of the Year Award by BBC Top Gear and Innovation Award in Energy and Environment from The Economist, London. He has also been named as one of the Top 50 most influential people in India to bring about change by Business Week magazine.

A former member of the National Board of Electric Mobility, Maini played an instrumental role in implementing the EV policy for the country

Good governance to the fore