The Airports Authority of India (AAI) and other airport developers have targeted a capital outlay of about Rs 91,000 crore for the next ve years for expansion and modification of existing terminals, new terminals, and strengthening of runways, among other activities.

This information was recently given by Civil Aviation Minister Jyotiraditya M Scindia in the Lok Sabha.

Under the Greenfield Airports Policy-2008, the Government has so far accorded ‘in-principle’ approval for setting up of 21 greenfield airports across the country: Mopa in Goa; Navi Mumbai, Shirdi and Sindhudurg in Maharashtra; Kalaburagi, Bijapur, Hassan and Shimoga in Karnataka; Datia (Gwalior) in Madhya Pradesh; Kushinagar and Noida (Jewar) in Uttar Pradesh; Dholera and Hirasar in Gujarat; Karaikal in Puducherry; Dagadarthi, Bhogapuram, and Oravakal in Andhra Pradesh; Durgapur in West Bengal; Pakyong in Sikkim; Kannur in Kerala; and Hollongi (Itanagar) in Arunachal Pradesh.

Under the Greenfield Airports Policy-2008, the Government has accorded ‘in-principle’ approval for setting up of 21 greenfield airports, of which eight have been operationalized

Out of these, eight airports —Durgapur, Shirdi, Sindhudurg, Pakyong, Kannur, Kalaburagi, Oravakal, and Kushinagar — have been operationalized.

In Bihar, the AAI had projected a land requirement of 108 acres for the development of a civil enclave at the Bihta Airport. The land has already been handed over by the state Government of Bihar to the AAI. However, the AAI has projected an additional land requirement of 191.5 acres for runway extension & installation of approach light and 8 acres for city side development to accommodate wide-bodied aircraft for international operations at the airport. 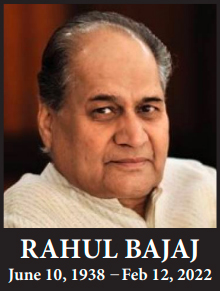 Rahul Bajaj, former chairman of Bajaj Auto, was a rarity: an industrialist who spoke his mind, something unusual in India.

He was born into an illustrious family, known for both business acumen and involvement in the freedom struggle. His grandfather, Jamnalal Bajaj, set up the Bajaj Group in 1926. Jamnalal became a disciple of Mahatma Gandhi, joined the nationalist movement, and never divorced his business from Gandhian values. Rahul Bajaj inherited that public-spirited temperament.

After graduating from St Stephen’s College in Delhi University with an Honours Degree in Economics in 1958, he got a degree in Law from Bombay University and an MBA from the Harvard Business School.

As head of the Bajaj Group, he excelled in the pre-liberalization era by sticking to the ideals of uprightness and honesty. His group was quite diversified, with interests ranging from manufacture and sale of motorized vehicles, general and life insurance, investment and consumer nance to home appliances, wind energy, special alloy, and stainless steel, and travel.

To champion the cause of the domestic industry vis-à-vis multinationals in the wake of the liberalization, for a ‘level-playing field,’ he organized a grouping of business magnates called the ‘BombayClub’.

Rahul Bajaj received many awards, including the Padma Bhushan, but he will be remembered as the businessman who spoke truth to power

How to transfer the values too