Deepak Bagla has a professional career of over three decades, with the World Bank, Citibank, and Private Equity having responsibilities across Europe, Africa, and Asia.

He is currently the Managing Director and CEO of Invest India, the national investment promotion and facilitation agency promoted by the Government. Invest India is also the executing agency for Start-up India and the Prime Minister’s Science and Technology initiative.

He is the President of the Geneva-based World Association of Investment Promotion Agencies with a membership of 105 countries. He is also a special invitee of the Prime Minister’s Science Technology & Innovation Advisory Council.

Bagla has a Bachelor’s degree with Honors in Economics from St Stephens College, New Delhi, and a dual master in International Diplomacy and International Trade and Finance from The School of Foreign Service, Georgetown University, Washington DC.

He has been conferred with ‘Grande Ufficiale dell Ordine Della Stella d’Italia’ by the President of the Republic of Italy. Behind Invest India’s cutting-edge investment facilitation work is the leadership of Deepak Bagla. With over 30 years of experience in multilateral and banking, Bagla brings unique perspectives from the corporate world together with an ability to marry them to Government vision. Under his leadership, Invest India has grown from strength to strength, being rated as a ‘Great Place to Work’ twice. Remarkably Invest India embodies the ethos it presents to potential investors. Bagla, while ensuring equality of opportunity, runs a team of over 300 professionals whose average age is 30. This is truly reflective of India, a country whose median age is 28.4 years and whose youth exemplifies innovation and excellence. 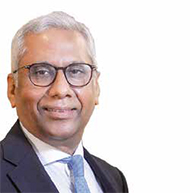 “We are, in many ways, a product of the changing times, of a new mindset that seeks to create a New India” Deepak Bagla, MD & CEO, Invest India

This is perhaps most evident in Invest India’s recognition as the World’s Most Innovative Investment Promotion Agency 2021 by OCO Global. When asked about what drove this recognition, the ever so humble Bagla replied, “We are, in many ways, a product of the changing times, of a new mindset that seeks to create a New India. In many ways, this has been brought about by a new form of governance—if I may use that word—and the changing manner in which governments envision the country’s economic future and the private sector’s role within it. I think I was lucky to get the kind of team I have, one that is able to pull diverse elements of what makes India unique and pitch investors quality opportunities.”

However, the success of the team is evident in the widespread laurels it has received from entities like the World Bank, UNCTAD, and WAIPA. Invest India’s prompt pivot to address the need of the hour birthed an online portal that helped ease investor concerns as economic uncertainty shrouded the international community. The Business Immunity Platform (BIP) was a comprehensive resource that helped businesses and investors get real-time updates on India’s active response to the pandemic.

According to Bagla, Invest India’s excellence can be attributed to “the leader of the country, Prime Minister Modi, who has enabled an institution of excellence with a clear objective and an autonomy that allows it to work across all levels of Government.” Invest India’s success, says Bagla, is its role as a bridge not just between government and business, but also among the Government itself.

With each passing week, Invest India is taking on newer responsibilities. The ambitious One District One Product (ODOP) project of the Government of India is also being managed by Invest India, as is the AGNIi mission under the office of the Principal Scientific Advisor. This is possible because of Invest India’s success in investment facilitation. Bagla provides the example of a leading Danish wind turbine blades manufacturing company that was able to secure all requisite approvals and begin operations within 15 months, the shortest time the company has experienced anywhere in the world. He attributes the success to astute policymaking, which has allowed Invest India “to be well connected with stakeholders and ensure efficient execution to witness magical outcomes.”

There is no wonder then that, despite a global decline in foreign direct investments, India was able to attract a whopping $81 billion in total FDI inflows. As India carves an enviable spot for itself in the global value chain, a lot will be owed to the young minds hard at work at Vigyan Bhawan. And, of course, to the leader who stands behind them.

In the short time since Invest India began its operations, it has helped the Government’s vision of making India a favorable place to do business. Responsible for visionary projects like ‘Make in India’ and ‘Startup India,’ Invest India has enabled a spirit of entrepreneurship and, in the words of Prime Minister Modi, “competitive federalism.”