Turnaround: Exports up, imports on the decline

Prayed at Kedarnath this morning.

Ever since coming to power at the Centre, Prime Minister Narendra Modi has underlined the need to beef up India’s defence preparedness. His remark at the recent meeting of the Cabinet Committee on Security (CCS) that every effort must be made to make India self-reliant in the defence sector acquired a special significance in the backdrop of the war in Ukraine.

PM Modi’s call is timely, as despite having made great strides towards self-reliance in defence production during the last seven years of his rule, India still has to depend on imports for its military requirements.

The Russia-Ukraine war underlines this irony. The crisis has caught India in a Catch-22 situation because it depends on both Ukraine and Russia for the supply of critical defence equipment.

The cause for this mismatch in supply and demand of defence requirements is the misplaced priorities of the previous governments. However, during the present Government’s tenure, defence production has increased six times. While India’s import of arms and ammunition and other defence equipment has declined by 33 per cent during the Modi regime, it has yet to get rid of its dependence on imports due to increasing requirements of its armed forces to face mounting security challenges on its eastern and western borders as well as the Indian Ocean.

The Government’s resolve to traverse this long road to self-reliance in quick time was also reflected in the Prime Minister’s address at a post-budget webinar on ‘Aatmanirbharta (self-reliance) in Defence- Call to Action’ organised by the Ministry of Defence.

“We have increased defence exports six times in the last five-six years. Today, we are providing Made in India defence equipment and services to more than 75 countries,” he said, adding that more than 350 new industrial licenses have been issued for defence manufacturing in the last seven years while only 200 licenses were issued from 2001-2014.

As per the Government’s new thrust, about 70 per cent of this year’s defence budget has been kept for domestic industry only. The Government wants the private sector to come at par with Defence Research and Development Organisation (DRDO) and defence PSUs. To facilitate this, 25 per cent of the defence R&D budget has been kept for industry, start-ups and academia and a special purpose vehicle has been arranged in the Budget. This will establish the role of the private industry as a partner beyond just a vendor or supplier.

Recalling his Government’s resolve to end its dependence on foreign defence manufacturers, PM Modi said that this was the only way India could have a surprise element over its adversaries in case of war. “Uniqueness and surprise elements can only happen when the equipment is developed in your country,” he said, pointing out that this year’s Budget has a blueprint for developing a vibrant ecosystem from research, design and development to manufacturing within the country.

The Prime Minister underlined that India had the capacity as well talent to beef up its defence preparedness. “Even during the British Raj and right after India got its independence in 1947, its defence manufacturing strength was very high and arms manufactured in India played a massive role in World War II. 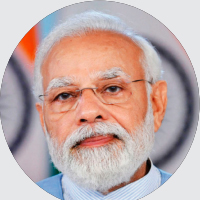 “We have increased defence exports six times in the last fivesix years. Today, we are providing Made in India defence equipment and services to more than 75 countrie”

He said that India’s defence manufacturing capacity weakened in the years after that but it does not prove that there is a dearth of capabilities in the country. He lauded the ordnance factories for being a shining example of progress with determination while adding that the seven new defence undertakings are rapidly expanding their business and reaching new markets.

Rising from the ground

A caring PM is the inspiration