The election of Droupadi Murmu as the President of India is a historic moment for Indian democracy. Her remarkable journey from an extremely poor tribal area in Odisha, that too from the disadvantaged Santhal community, to the highest constitutional position in the country has been marked by struggles, grit and determination.

The elevation of a person of such humble origins as the First Citizen is a matter of great joy for all of India, more so for the tribal community. It is sad that the nation had to wait for 70 long years to see a tribal woman reach the highest office of the land. This moment marks yet another victory for our democracy and our Constitution under the leadership of Prime Minister Narendra Modi.

Another wonder of the world

Tribals constitute nearly 9% of our population. Their sacrifices for our freedom are unforgettable. Unfortunately, post-Independence most governments did not do enough for their development and empowerment. Hardly any efforts were made to bring them into the national mainstream, and they also remained devoid of important offices.

It was only under the leadership of former PM Atal Bihari Vajpayee that serious steps were taken to fulfil the aspirations of our tribal society. In 1999 he created a separate tribal affairs ministry, which was followed by the formation of the National Commission for Scheduled Tribes through the 89th Constitutional Amendment in 2003. The transformation of our tribal communities started by Vajpayee has been taken forward by PM Modi with more vigour and resolve.

Guided by the principle of Sabka Saath, Sabka Vikas, Sabka Vishwas and Sabka Prayaas, the Modi government has taken many initiatives to fulfil the aspirations and hopes of the tribal population. In the past eight years, there has been a massive increase in the budget allocation for projects linked to tribal communities’ welfare and progress. The Tribal SubPlan budget has been increased fourfold from Rs 21,000 crore in 2013-14 to Rs 86,000 crore in 2021-22. 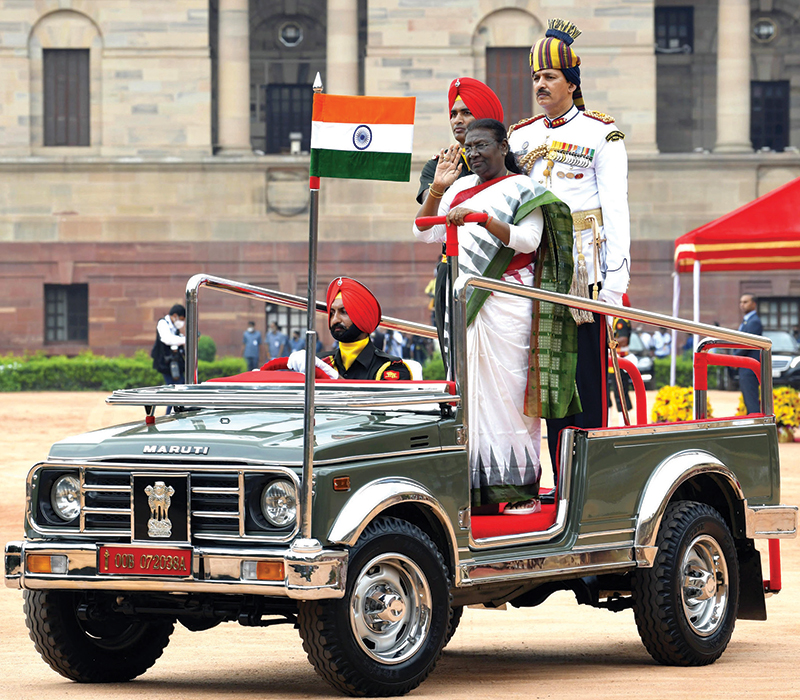 Similarly, the budget of Eklavya Model Schools, specially developed for tribal students, has been increased from Rs 278 crore to Rs 1,418 crore. Fund allocation for scholarships for tribal students has also been hiked from Rs 978 crore to Rs 2,546 crore. As part of the entrepreneurship development initiative, 3,110 Van Dhan Vikas Kendra Clusters and 53,000 Van Dhan self-help groups have been established with an expenditure of Rs 327 crore.

Our tribal areas are most affected by mining activities, but financial gains from these operations were never shared with the local communities.

To address this, Modi government created a District Mineral Foundation so that 30% earnings from mining activities could be spent on tribal areas’ development. So far, Rs 57,000 crore has been raised through this and is being used in various development works. Similarly, the number of Tribes India outlets, run by TRIFED, which takes care of the marketing and sale of products made by our tribal communities, has been increased from 29 to 116.

PM Modi has also brought the rich tribal culture and heritage into the national limelight. Tribal arts, literature, traditional knowledge and skills have been included in various curricula. As part of Azadi Ka Amrit Mahotsav, a series of programmes are being organised nationwide to highlight the contributions of our great tribal leaders to our freedom struggle.

The nation now celebrates the birth anniversary of Bhagwan Birsa Munda, which falls on November 15, as Janjatiya Gaurav Diwas. The Modi government is also developing Tribal Freedom Fighter Museums across the country with a budgetary outlay of Rs 200 crore. In his speeches, PM Modi often refers to our great tribal heroes and highlights their contributions to inspire today’s generation. All this underlines how this government is tirelessly working for the honour and empowerment of our tribal community.

From Kashmir to the Northeast, the tribal population dominates a large chunk of our rural landscape, particularly in Jharkhand, Madhya Pradesh, Chhattisgarh, Odisha, Rajasthan and Gujarat. But postIndependence, Congress ignored most of the tribal-dominated regions including the Northeast.

It was Narendra Modi, who immediately after taking over as the PM, began the transformation of our tribal areas in right earnest. To kickstart the growth and development of the tribaldominated Northeast, he formulated the Act East Policy. In the past eight years our Northeastern states have been successfully integrated into the national mainstream to become partners in the country’s growth and progress.

For decades poverty and social insecurity have been the biggest challenge for our tribal communities. Left extremists exploited these to spread their wings in our tribal areas.

This resulted in a total disruption of growth and development in some of these areas. But the Modi government’s zero-tolerance policy towards left-wing extremism has led to its near-complete elimination. Violence and unrest in our tribal areas have been replaced by development and peace.

The socio-economic development and empowerment of our tribal society and their political representation have always been an integral part of BJP’s ideology. And today, under the leadership of PM Modi, India has Droupadi Murmu as its first tribal woman President. This is a shining example of PM Modi’s resolute commitment to the empowerment of our tribal brothers and sisters.

— COURTESY: The Times of India

A stakeholder in development process

Purposedriven lives and careers evolve together