India and Sri Lanka have a legacy of intellectual, cultural, religious, and linguistic interaction, and the relationship between the two countries is more than 2,500 years old. According to traditional Sri Lankan chronicles, Buddhism was introduced into Sri Lanka in the 4th century BCE by Mahinda, the son of Indian Emperor Ashoka.

As India, it was a British colony for nearly 150 years till its independence in 1948 and was admitted to the United Nations seven years. It is also a member of the Commonwealth and the South Asian Association for Regional Cooperation (SAARC). As the home of several ethnic groups, each with its cultural heritage, Sri Lanka also has a highly varied cultural landscape.

India and Sri Lanka have enjoyed a cordial and relatively stable relationship since their independence. The two countries align over key security and economic objectives, which include maintaining freedom of navigation in the Indian Ocean region, combating the threat of terrorism, and working together towards a more prosperous South Asian neighborhood.

In recent years, significant progress in the implementation of developmental assistance projects for Internally Displaced Persons (IDPs) and disadvantaged sections of the population in Sri Lanka has helped further cement the bonds of friendship. The entry into force of the India-Sri Lanka Free Trade Agreement (ISFTA) in 2000 contributed significantly towards the expansion of trade between the two countries. Economic ties between the two nations also include a nourishing development partnership that encompasses areas such as infrastructure, connectivity, transportation, housing, health, livelihood and rehabilitation, education, and industrial development The Narendra Modi Government has given a fresh impetus to the bilateral relationship. India has traditionally been among Sri Lanka’s largest trade partners and Sri Lanka remains among the largest trade partners of India in the SAARC. In 2020, India was Sri Lanka’s second-largest trading partner with the bilateral merchandise trade amounting to about USD 3.6 billion.

In addition to being Sri Lanka’s largest trade partner, India is also one of the largest contributors to Foreign Direct Investment in Sri Lanka. Several leading companies from India have invested and established their presence in Sri Lanka. According to BoI, FDI from India amounted to about $1.7 billion during the period 2005 to 2019. Similarly, investments by Sri Lankan companies in India are also surging and taking advantage of India’s dynamic economy and the wider market. 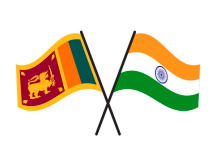 In addition, the two countries can look forward to extensive cooperation in pharmaceutical manufacturing. In the technology sector, India could create job opportunities by expanding the presence of its IT companies in Sri Lanka.

India accounts for the maximum number of tourists to Sri Lanka, but the scope of religious tourism is yet to be explored. Through Prime Minister Modi’s US $15 million grant for the promotion of Buddhist ties with Sri Lanka, the two countries can look to create a Buddhism knowledge and tourism corridor.

Recent experience must have made Colombo understand the risks of its China-centric policy. In comparison, deepening ties with India can boost its infrastructures, human resource development, health and education facilities, domestic jobs, and family incomes. The areas of convergence of interest far outweigh the limited issues that can be addressed through amicable negotiations.

This is an indication of Sri Lanka’s gradual tilt towards India for it came immediately after it decided to buy fertilizer from India after rejecting a Chinese fertilizer consignment. There’s a farcical note to the India-China tug-of-war playing out over Sri Lanka. It is alleged that the fertilizer that arrived aboard a Chinese cargo ship, whimsically named the Hippo Spirit, was substandard.

Other developments, such as the cancellation of a Chinese contract for a hybrid renewal system and awarding it to India and preferring India against China for the ambitious Trincomalee oil tank project further strained ties between Beijing and Colombo.

The island Nation’s economic crisis has proved to be the litmus test. Beijing lured Colombo into borrowing huge sums on exorbitant rates from Chinese banks for the Hambantota Port. By default, it was forced to surrender control of the port. Lankan MP Dr. Wijeydasa Rajapakshe accused China of indulging in economic invasion, corruption, and debt-trap diplomacy.

Cryptos: In or Out?

Time to reimagine the Maximum City