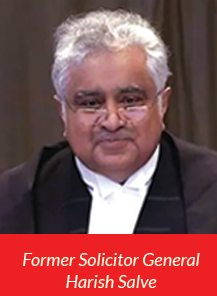 NEW DELHI: “Primacy is a weapon of last resort, not a pen knife to be brandished,” said Harish Salve, an eminent jurist of international acclaim.

In an exclusive talk with Blitz India, he said judicial appointments should not be the sole prerogative of the executive or judiciary. “We need a permanent institution to shortlist candidates and a highpowered institution that has a mix of judges, political executive and a few eminent Indians to select from this list.”

Salve’s words should count. India’s former Solicitor General is not only a Senior Advocate of long-standing in the Supreme Court of India but also a King’s Counsel for the courts of England and Wales.

One of the world’s leading counsels in the fields of constitutional law, public international law, human rights and arbitration, Salve has successfully represented India in many global courts.

He fought and won a sensational legal battle in the International Court of Justice (ICJ) for staying the execution of Kulbhushan Jadhav, an Indian citizen sentenced to death by a Pakistani military court on charges of spying for India.

He also won a significant case for India against Pakistan involving claim to a £35 million British bank account of the Partition-era seventh Nizam of Hyderabad.

Within India, Salve has largely practised in the Supreme Court, which has sought his assistance as amicus curie (friend of the court) in many important cases. He has also been awarded Padma Bhushan by the Government of India.