A Monument to New Delhi India: Work in progeess for Central VIsta redevelopment

Significant progress has been made in the field of drinking water supply as well. In 2019, just 3.23 crore (or 17 per cent) of the 19.22 crore rural households had tap water connections. According to the Jal Shakti Ministry data, ‘i\s on December 25, 8.70 crores ( 45.32 per cent) rural households from more than 1.29 lakh villages in 83 districts are receiving tap water supply:’In a nutshell, Modi has redefined governance and the dynamics of the welfare state. Instead of being bewitched by exotic Western models and having a top-down bureaucratic approach, he has focused on the poor, their needs and aspirations, and the means to reach them directly, without the intermediation of officials and middlemen. The success of pro-poor schemes has also benefited him politically, as evident from his return to office in 2019 with a bigger mandate.

This, however, doesn’t mean that Modi is blindly following populist policies at the expense of long-term interests of the economy, defence, security, and national interests. Efforts are on to rein in the fiscal deficit: it has been pegged at 6.4 per cent for 2022-23, down from 6.9 per cent in this year.

This has happened primarily because the Modi regime never wavered in its commitment to economic reforms. The commitment was in tune with Modi’s
famous slogan Maximum Governance-Minimum Government. Related is the famous quote which he used to express his thoughts: “The business of Government business.

The Government’s focus is clear: Atmanirbhar Bharat and Make in India. A number of packages have been announced to strengthen domestic supply lines and boost manufacturing. 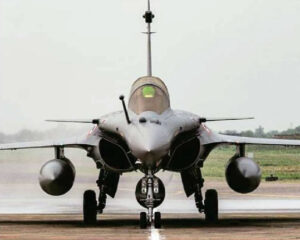 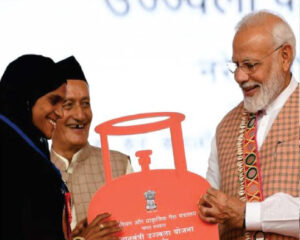 As mentioned earlier, his slogans and sayings are not for narrow political gains; they translate into action. Hence the privatisation of Air India-a public sector white elephant that squeezed tens of thousands of crores from the taxpayer. The Government has also intensified efforts to sell more state-run companies. This will not only help the exchequer but also reduce the distractions of the Government from running companies.

Against the backdrop of the deadly Covid-19 pandemic and the ensuing lockdowns, maintaining fiscal discipline and persisting with reforms is undoubtedly an excellent performance. Despite the acute strain on the exchequer, the Modi Government wasn’t stingy when it came to fighting the Covid-19. The total vaccination coverage is around 170 crore, most of which is freely administered.

Just like the health infrastructure, the physical infrastructure has also received a leg up. For instance, the pace of highway construction increased from 12 km per day in 2014-15 to 37 km per day in 2020-21. In the last seven years, the length of national highways has gone up by more than 50 per cent.

In tune with its firm nationalist beliefs, the Modi Government has taken a large number of steps to strengthen the country’s defence. It ensured that the Indian Air Force (IAF) got 36 state-of-the-art Rafale fighters from France for Rs 59,000 crore. Among other major inductions is the S-400 air defence system from Russia. This is an answer to a similar system deployed by China on the Line of Actual Control (LAC). 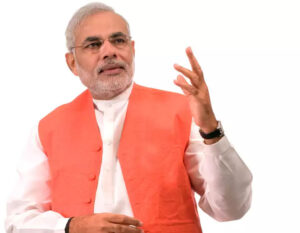 Under Modi, India has not just been buying the best arms and armaments but also manufacturing and even exporting some. For instance, BrahMos Aerospace Private Limited (BAPL) has signed a contract with the Department of National Defence of the Republic of Philippines for the supply of shore based anti-ship missile systems. The contract is an important step forward for the Governm ent’s policy of promoting responsible defence exports.

It is not just in acquiring and making defence equipment that the Government has taken giant strides; it has also bolstered the morale of armed forces by giving them a free hand in operations. This was evident in the surgical strikes against terror bases in Pakistan and at Doklam and Galway against China.

Another manoeuvre to contain China was India’s participation in the Quadrilateral Security Dialogue or Quad. The other members of this strategic security dialogue are the US, Australia, and Japan.

The fact that he gave a personal touch to his foreign visits has helped India build strong and meaningful relations with various countries. Ties have improved with the most powerful country in the world, the US; apart from Quad, his government also signed the Logistics Exchange Memorandum of Agreement (LEMOA) in 2016 and the Communications Compatibility and Security Agreement (COMCASA) in 2018.

Also, ties with Israel have improved. In a special video message on January 29 to commemorate 30 years of full diplomatic relations with Israel, PM Modi said, “I am fully confident that the India-Israel friendship will achieve new milestones in cooperation in the coming decades”

Interestingly, this has not deteriorated relations with Arab and Muslim nations. Saudi Arabia bestowed its highest civilian award to Modi. UAE and Bahrain have also similarly honoured him. And last, but not least, Modi has succeeded in instilling pride among the people about their glorious past and their outstanding civilisational heritage. He ensured that the longstanding issue of the Ram Temple was resolved amicable Similarly, 370 of in a manner. Article the Constitution-giving special status to Jammu & Kashmir, thus stalling its integration with the rest of the country-was abrogated by an Act of Parliament.

The transformation the Prime Minister has in mind is not only getting translated into reality but is also taking a concrete shape-even literally. The Central Vista is a testimony to New India.

Modi recognises that a lot remains to be done, that the transformation of India-from a poor and diffident nation to a prosperous global power-is work in progress. Hence his untiring pursuit for the goals he set seven years ago.