Nestled in the heavenly Himalayas, the hill state of Himachal Pradesh is usually thronged by tourists. Today this holiday destination has turned into a political slugfest between the BJP and the Congress, with the AAP trying to make inroads into both the camps but coming a cropper.

Historically, Himachal has had a twoparty system, where the voters unseat the party in power since 1985. The state has alternated between the BJP and the Congress for the last 37 years, for a while, between Congress led by the late CM Virbhadra Singh (CM six times) and BJP led by former CM Prem Kumar Dhumal (CM twice).

Given BJP ruled for five years (2017 to 2022), going by the historical legacy, one would expect a Congress government to be formed on December 8, on counting day for Himachal election results.

However, chemistry, plus the blitzkrieg barnstorming led by star-campaigners of the saffron party suggest that the BJP has the edge Moreover, the BJP has not officially announced the incumbent CM Jairam Thakur as its CM face for the Assembly elections 2022. Two reasons: first and foremost, the BJP is banking on the star power of Prime Minister Narendra Modi to win the election. Second, party insiders point out that Dhumal’s younger son Anurag Thakur (Union Cabinet Minister), who is one of the star campaigners today, is a strong contender for the CM post if BJP is victorious. This inside story seems credible since Thakur was the BJP central leadership’s surprise face for the CM after 78-year-old former CM Dhumal lost the election in 2017.

BJP bears the brunt of the OPS and rebel MLAs

Ironically CM Thakur is not the official CM candidate today. This strategic move is to help buck the fierce anti-incumbency against the state Government given high unemployment, high inflation, pandemicrelated health problems and the anger generated given no solution to the Old Pension Scheme (OPS).

Denial of tickets to 11 sitting MLAs, including two ministers, and the fielding of 23 new faces have triggered rebellion among party members. The rebels have filed nominations to contest for 14 seats. This is likely to dent and damage few constituencies with close fights. In 2017, almost 30 constituencies were won or lost with less than 5,000 votes, 10 with less than 100 votes.

The Congress has lost its mojo, the charismatic Virbhadra Singh. His widow, 66-year-old Pratibha Singh, is banking on the ghost of her husband to rescue the Congress. However, she is also not officially the CM candidate for Congress but the most likely choice in case of Congress victory. With Rahul Gandhi and the entire Congress focussed on the Bharat Jodo Yatra, Priyanka Gandhi is the only star campaigner for the Congress. Cashstarved Congress minus its galaxy of star campaigners appear tired. The AAP is officially contesting all 68 seats of the hill state but in reality, is not in the fray. The competition quintessentially remains a two-horse race. AAP might end up cutting some of the Congress votes, thereby, helping the BJP win the swing constituencies, where the victory margin in 2017 was very tight.

The BJP’s two catchy slogans are ‘Riwaaz Badlega, Raj Nahin’ (Culture will change, not regime) and the ‘double engine’ Sarkar (PM Modi plus BJP CM). The Sankalp Patra (BJP manifesto) focuses on making the state reliant. The key promises are: to empower women (the Uniform Civil Code is a big promise), youth, farmers and state Government employees. The manifesto has listed 11 resolves. Initiate 33 per cent reservation for women in the Government, create 8 lakh jobs, and remove irregularities in the salaries of the state Government employees, payment of Rs 3,000 annually to small-scale farmers, reduce GST to 12 per cent on apple packaging, a Rs 900 crore corpus fund for start-ups and increase financial aid to soldiers killed in the line of duty.

The Congress has highlighted the OPS issue. The BJP bears the brunt of the OPS anger among pensioners. Given high literacy rates in Himachal, such crucial issues affecting retired Government employees have the potential to turn the applecart and dislodge the incumbent. 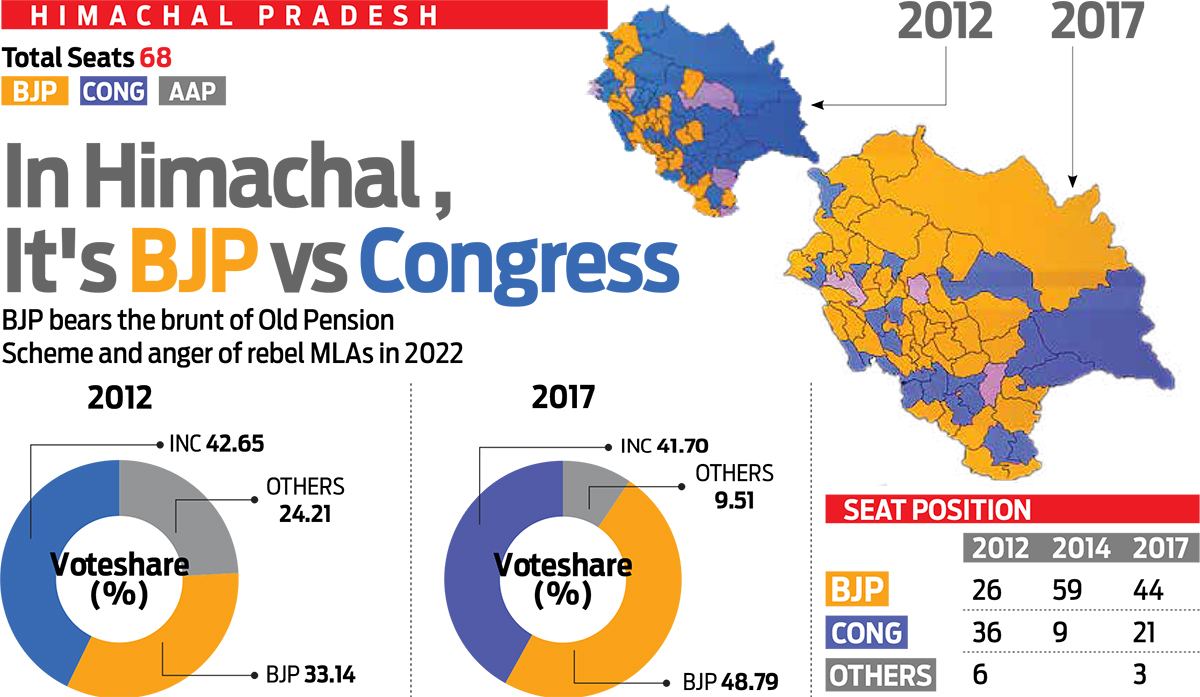 The incumbent chief minister, is the CM candidate for the BJP. He is contesting from the Seraj assembly constituency in Mandi, from where he has won five assembly polls consecutively. Thakur was the panchayati raj and rural development minister during the previous BJP government (2009-2012).

The widow of former Chief Minister Virbhadra Singh is the most high profile candidate as CM face for the Congress Party in Himachal. She is a MP from the Lok Sabha from Mandi. The Congress is relying on the legacy of the late Virbhadra Singh, who was six times CM of Himachal.

Union Cabinet Minister of I & B and Sports & Youth Affairs. Thakur has also been MoS for Finance and Corporate Affairs. Son of former CM, Prem Kumar Dhumal, MP from Hamirpur, Thakur is a strong contender for the CM post in case BJP wins Himachal.

Medicine from the Sky

The voice lives on