Reviving and deepening of age-old ties

India and Nepal have enjoyed a warm people-to-people and Government-to-Government relationship for ages, till the Chinese dragon started casting its shadow in recent times. Fortuitously, last week’s IndiaNepal Summit between Prime Minister Narendra Modi and his Nepali counterpart Sher Bahadur Deuba came at a time when Nepal’s relations with China are at an all-time low.

And the two leaders seized the opportunity to iron out their differences, and consolidate the friendly relations between the two countries by announcing a plethora of development projects. Given his ‘Neighbourhood First’ policy and the importance that Nepal holds in India’s strategic consideration, Prime Minister, Narendra Modi, has visited Nepal many times during his tenure of seven years, reflecting the priority that the Indian Government accords to its relations with Kathmandu.

Two years back, however, certain differences had cropped up, Ties between India and its Himalayan neighbor had soured during the tenure of Nepal’s then Communist Prime Minister K.P. Sharma Oli. Nepal unveiled a new map that showed portions of territory in India as part of Nepal. New Delhi had objected to that move.

The Modi-Deuba interaction towards the end of March marked the beginning of a new era of mutual trust and cooperation. From cross-border rail connectivity to generating and sharing power and establishing trade corridors, India and Nepal sought to deepen their ties afresh. The two sides announced an India-Nepal Joint Vision Statement on Power Sector Cooperation, which was the biggest takeaway from the Nepal PM’s visit to India, apart from rail connectivity.

They also signed four agreements on Nepal officially joining the International Solar Alliance, Indian technical assistance to Nepal’s railway sector, cooperation in the field of the petroleum sector, and exchange of expertise between Nepal Oil Corporation and Indian Oil Corporation.

The timing of the India-Nepal summit couldn’t be better. The relations between Nepal and China just now are at an all-time low. The business communities of Nepal who engage in trade with China have protested, time and again, against China for closing the border. The issue of a huge trade deficit with China is a matter of concern for Nepal. 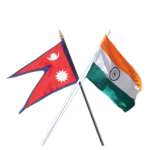 Tensions between the two countries peaked after Nepal ratified the American grant assistance, amounting to $500 million under the Millennium Challenge.

Corporation (MCC) on February 27, 2022. This was strongly opposed by China. In fact, Nepal ignored Chinese objection because it believes that the MCC projects are designed in a way that could strengthen the cross-border transmission of electricity between Nepal and India.

The sale of surplus power to India would be a continuous source of income for Nepal, apart from generating employment opportunities and accelerating the growth of the Nepalese economy.

The growing thaw in Sino-Nepal relations became all the more apparent when Chinese Foreign Minister Wang Yi, visited Nepal on March 25-27 and warned Nepal about the external interference that threatened the core interests of Nepal and China.

The fact that Deuba’s visit to New Delhi came immediately after Wang Yi’s visit to Kathmandu is not without significance. It marked the highest level of diplomatic exchange between the two sides since the border row and Deuba sought Modi’s help to activate an existing border mechanism to find a diplomatic solution.

There was a general understanding that both sides needed to address this in a responsible manner through discussion and dialogue in the spirit of our close and friendly relations and that the politicization of such issues needs to be avoided.

This was a clear indication to China that the two countries would not allow any third party to exploit differences between India and Nepal.

The two countries agreed to finalize the detailed project report of the long-due Pancheshwar hydropower project, which was inked during Deuba’s official visit to India as Prime Minister way back in 1996. The multipurpose project involves the construction of two dams on the border river Mahakali, for irrigation, and flood control and to generate 5,040 megawatts of power for the two countries.

Though no substantive outcome came out on border and political issues, Deuba’s visit has helped repair bilateral ties, paving the way for cooperation on multiple fronts, including the energy and connectivity sectors.

The fate of Sri Lanka and Pakistan has made Nepal wiser about the ominous consequences of falling into China’s debt-trap diplomacy.

During his latest visit to Kathmandu, Chinese Foreign Minister Wang Yi tried to influence Nepal to accept loans for certain projects under China’s Belt and Road Initiative (BRI). However, Prime Minister Sher Bahadur Deuba made it clear that Nepal wanted only grant projects from China and not loans.

The country favored only such loans from Beijing that were of international standards, like the one provided by multilateral institutions like the World Bank or the Asian Development Bank, Yi was told.

Nepal also made it clear that it only wanted such projects under the BRI that would be open to all forbidding, not just the Chinese firms like in other BRI projects.

As a result, not a single agreement on the much-touted Belt Road Initiative (BRI) was signed during Wang’s visit to Kathmandu.

With the Chinese debt in South Asia rising from $4.7 billion to upwards of $40 billion, Nepal under Deuba chose to walk out of the debt trap of the Middle Kingdom after seeing the mounting political crisis in Pakistan and Sri Lanka.

In fact, Deuba bluntly told visiting Wang that his country can only accept grants from Beijing and not loans for infrastructure projects. He also made it clear that “Nepal does not accept any project that comes with strings attached — political or any other.”

Nepal is concerned about the increasing interference by China in Nepal’s internal affairs. Yi was clearly told that Nepal does not relish Beijing’s “unnecessary, undiplomatic, and hostile comments on the MCC compact” without understanding that it was a not only bilateral but also domestic issue between Nepal and
the USA.