Moving beyond the Dragon’s shadow

In a first, India’s Space Research Organisation (ISRO) recently launched a satellite in collaboration with Taiwan’s National Space Organisation. Significantly, this came on the day when India banned several Chinese apps. The app ban has been part of growing scrutiny on China-backed technology over fears of these being used to snoop in.

Only last week, the State Bank of India raised $300 million from the Taiwanese market through a maiden issue of Formosa bonds at a coupon rate of 2.49 percent. The issue attracted a wide range of investors, such as supranational agencies, asset managers, private bankers, and financial institutions. Meanwhile, the Indian government has also started talks with Taiwan on a free-trade agreement.

Home to the world’s largest semiconductor and microprocessor manufacturing sector, Taiwan is also a hub for electronics and precision tools. India wants a steady supply of these key items and would like more Taiwanese companies to shift operations to India.

New Delhi is negotiating a preferential trade agreement with Taiwan with a special focus on securing a steady supply of microprocessors, electronic components, and precision tools. Apart from commitments to reduce import duties across key categories, the trade pact will include an investment chapter. This remains the Government’s primary aim – to bring in more companies, capital, and technical skills from the rich, manufacturing-driven economy.

These developments would normally have been treated as a routine affair between the two countries. However, given the fact that India and Taiwan do not enjoy formal ties, and India has in the past remained hesitant to deepen its ties with Taiwan due to fear of antagonizing China, this underscores a profound shift in New Delhi’s policy toward Taipei. 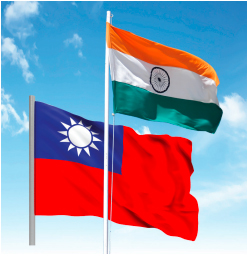 “I have seen a steady blossoming of Indian interaction with Taiwan. Prospects for India-Taiwan cooperation have never been better,” said Gourangalal Das, Director General of the India Taipei Association. He was speaking at the launch of the TaiwanIndia policy report on February 25.

India under Prime Minister Narendra Modi has taken several bold initiatives to openly acknowledge its ties with Taiwan. One such decision was of course to invite Taiwan’s Ambassador to Modi’s swearing-in ceremony. Taiwan’s de facto embassy in New Delhi has also been given more public space. The bilateral trade last year increased by 64 percent since 2020.

The two nations have also taken steps to foster cooperation in education and research. For example, the Ministry of Science and Technology and the Indian Council of Social Sciences signed an agreement enabling researchers of the two countries to work together on major projects of mutual benefit.

While successive governments in the past tried to foster ties with Taiwan in a closet due to their fear of China, India under PM Modi has taken several bold initiatives to openly acknowledge its ties with Taiwan

Both New Delhi and Taipei are facing major security threats from the Chinese Communist regime. But this is the first time that Taiwan, under President Tsai Ing-wen’s leadership, and India, under Modi’s, have strongly positioned themselves against China, and have shown the desire to move beyond the shadow of Beijing in expanding their bilateral cooperation.

While Taiwan has assumed a place in India’s Act East Policy, the Tsai Government attaches huge importance to India in its New Southbound Policy.

”There is still so much underutilized potential in the (Taiwan-India) relationship,” said Taiwan-Asia Exchange Foundation (TAEF) Visiting Fellow Dr. Sana Hashmi at the release of the report titled ‘Taiwan and India: Strategizing the relations’ published by TAEF.

With Taiwan and India desperately trying to reduce their bilateral trade and commerce with China, the two countries can prove to be beneficial for each other in several ways. It will reduce India’s dependability on China and enable it to develop a safe and secure 5G network.

On the other hand, Taiwan would have access to India’s large market. Through India, Taiwan could easily expand its presence in other South Asian countries with which China has close relations.

Among one of the most densely populated countries in the world, Taiwan officially named the Republic of China (RoC), is a multi-island territory in the western Pacific Ocean. In addition to the main island, the ROC Government has jurisdiction over 22 islands in the Taiwan group and 64 islands to the west in the P’eng-hu (Pescadores) archipelago.Taiwan’s political history is full of ironic twists and turns of global politics. It was self-governing until the 1600s, till it became a colony of the Netherlands in the 17th Century and then regained its independence before being taken over again—this time by China, which ruled the island for two centuries. In 1875, Japan gained control of Taiwan after the First Sino-Japanese War.

Following Japan’s defeat in World War II, Taiwan was returned to the Republic of China in 1945. In 1949, China’s ruling nationalist government was driven off the mainland by Communists and forced to flee to Taiwan. But it continued as a permanent member of the UN Security Council. In 1971 the UN General Assembly resolved to recognize the People’s Republic of China as the legal representative of China in the UN, and ROC ceased to be a member of the UN. Now it can’t be admitted to the UN due to China’s veto power as a permanent member of the UNSC.

Despite ousting it from the UN system, however, China has not been able to weaken or wish away Taiwan. Today it has diplomatic relations with 13 UN members and the Vatican. In addition, it maintains unofficial relations with 58 UN member states, Hong Kong and European Union. It has the 31st largest diplomatic network in the world with 110 offices.

Its rapid industrialization and economic growth have been described as the Taiwan Miracle. As it developed alongside Singapore, South Korea, and Hong Kong, Taiwan became known as one of the “Four Asian Tigers”.

While the Covid-19 recession hit most countries including US and China, Taiwan’s economy has outshined others in the last two years. It registered a 3.1 percent expansion in 2020 and is likely to expand by 6.1 percent in 2021.