LOGO: Planet Earth juxtaposed with lotus THEME: ‘One Earth, One Family, One Future’

NEW DELHI: India, one of the oldest civilisations, has a lot to offer to the world and its G20 presidency logo and theme are a reflection of its deeprooted belief in universal equality and harmony.

‘Vasudhaiva Kutumbakam’ or “One Earth, One Family, One Future”, is India’s official G20 theme. It draws inspiration from the “ancient Sanskrit text of the Maha Upanishad”, said Prime Minister Narendra Modi at the virtual unveiling ceremony on November 8.

The theme not only emphasises value of all life forms – whoever they are and wherever they are – but also celebrates the idea of interconnectedness. The official logo, planet Earth juxtaposed with a seven leaved lotus, is coloured with saffron, white, green and blue. Culturally, the national flower lotus symbolises an ability to stay unaffected and rise-above challenges. PM Modi spoke about the significance of lotus in Indian culture, especially its spiritual and religious connection with knowledge and prosperity.

Taking it a step further, he advocated for the need to shed individualist or self-centred aspirations and work together towards shared knowledge and prosperity. He was trying to highlight how the country-centered and block-centred approaches have largely failed, especially on the climate and financial fronts.

“The seven petals on the lotus in the logo are also significant. It represents the seven continents. Seven is also the number of notes in the universal language of music. In music, when the seven notes come together, they create perfect harmony,” PM Modi said. 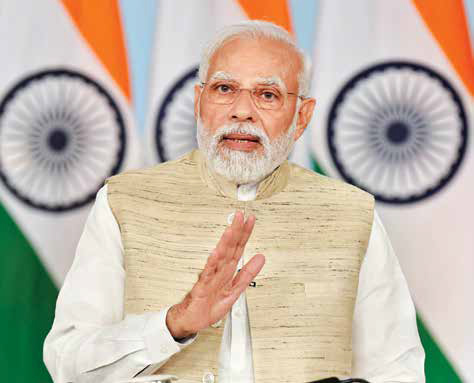 The Prime Minister emphasised that the world today is going through a series of disruptions and Indian approach will unite and bring hope to the world. “The world is going through the aftereffects of a disruptive once-in-acentury pandemic, conflicts and lot of economic uncertainty. The symbol of the lotus in the G20 logo is a representation of hope in these times. No matter how adverse the circumstances, the lotus still blooms,” he said.

The theme and the logo represent an Indian approach to G20 presidency– a way of living in harmony with cohabitants and the surrounding ecosystem. India will be working to unite a fragmented world. Calling India the “mother of democracy”, PM Modi said India’s efforts will be to ensure that “there is no first world or third world, but only one world.”

During its presidency between December 1 this year and November 30, 2023, India will host over 200 meetings, addressing 32 different work streams. The first G20 Sherpa meet under the Indian presidency will take place between from December 4 to 7, in Udaipur.

R20: TOWARDS AN ALLIANCE OF CIVILISATIONS

India doubles down its opposition

The holy grail of chess is here!