An ‘elite madhushala’, in the words of its detractors, Delhi Gymkhana Club is in the throes of a major transformation. The 107-year-old institution, located next to the Prime Minister’s official residence, is in the process of losing its exclusivity. A Government-appointed Administrator, retired IAS officer Om Pathak, is striving to clean up its finances besides doing everything possible to ensure that the club conforms to the mandate behind its existence.

The situation is, obviously, not to the liking of its members who, already incensed at the ‘Government takeover’ of the club, are now out with a litany of charges against the Administrator. In their interactions with various media platforms, old-timers and those from the now-defunct Governing Committee of the club have voiced their frustration at the Government treating DGC as “the biggest financial fraud in this country”. They are also angry that a “private club” is being turned into a “public space” and are lashing out at attempts to destroy its very nature.

Their arguments resonate a lot with those who are part of this exclusive domain where membership is acquired, at times, on a hereditary basis. An average applicant, howsoever deserving, has to wait for a minimum of over three decades to get in. The registration/application fee for Government officials to join the club is Rs 1.5 lakh while for non-Government candidates it is Rs 7.5 lakh. Once membership is attained, a Government member has to pay Rs 5 lakh while a nonGovernment member has to shell out Rs 22 lakh.

The astronomical fee and many other elements of its membership structure may sound bizarre to an outsider but DGC, like any other prime institution in the country, has every right to justify these. However, the Government intervention in the affairs of the club has been for altogether different reasons; the reasons which have been considered sound by top governing bodies like the NCLT and the NCLAT. A look at the entire issue makes it clear that the Government has gone totally by the book.

Among the Government’s reasons for the takeover, the primary one was that the affairs of the club were being run in a manner “prejudicial to the public interest”. It also claimed that while the land was allocated to the club for sporting activities, only two percent of the accounts show expenditure on sporting activities. Catering consumables, wines, beverages, and cigarettes make up as much as 30 percent of the club’s expenditure which, it said, violates the terms of the land allotment.

Further, it said the club’s committee charged “exorbitant” registration fees from aspiring members despite having a waiting list that had been pending since 1972. The committee was also accused of mismanaging funds received in the form of registration fees, on which no interest was paid. The Government also alleged that membership applications of ‘green card’ holders – 21-year-old dependents of permanent members – were fast-tracked while other applicants had to wait for 30-40 years.

The Government’s stand was presented in a petition filed under Sections 241 and 242 of the Companies Act, 2013, by the Ministry of Corporate Affairs with the National Company Law Tribunal (NCLT) in April 2020.

In its order in June 2020, the NCLT said there was a prima facie case. It, however, refused to suspend the entire general committee of the club and asked the Government to appoint two members to the committee instead. Finding the relief inadequate, the Government challenged the decision before the National Company Law Appellate Tribunal (NCLAT). In its order, the NCLAT said the suspension of the board was necessary because two Government nominees on the board would be of no consequence as their voice would be lost in a din on account of their inferior numerical strength. 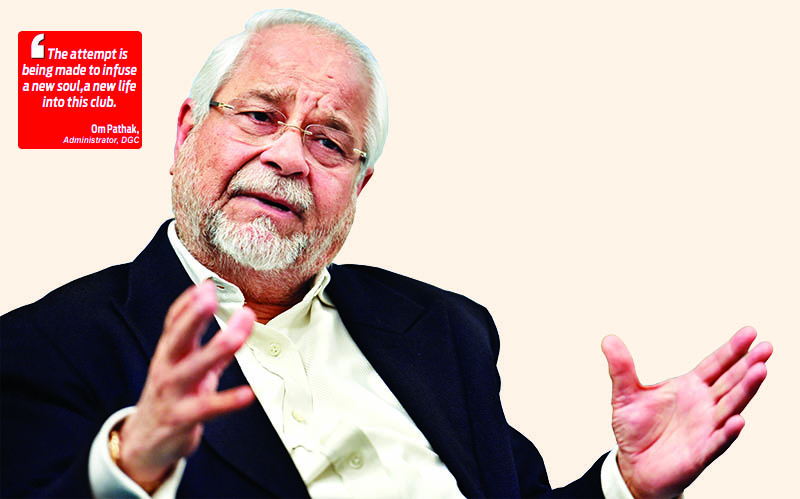 In its order in June 2020, the NCLT said there was a prima facie case. It, however, refused to suspend the entire general committee of the club and asked the Government to appoint two members to the committee instead.

The NCLAT also overruled the Gymkhana lawyer’s argument that there was no public interest involved in the club affairs just because 27 acres of land was leased by the Government. In its order, the NCLAT said that the perpetual lease granted to the club was a State largesse and went on to say, “under the garb of the distinctive character of the club which is a relic of the Imperial past, the doors for membership are virtually limited to people having blue blood in their veins thereby perpetuating apartheid…

In September 2021, however, relief of sort came for the club when the Supreme Court, while hearing the former General Committee’s appeal against the NCLAT order, remanded the matter back to the NCLT and asked it to settle it within four months. The SC Bench emphasized that appellants have to be heard before the NCLT and the Centre-nominated Administrator will conduct elections if the NCLT does not decide the matter within four months.

An average applicant has to wait for a minimum of over three decades to get in. The registration/application fee for Government officials to join the club is Rs 1.5 lakh while for non-Government candidates it is Rs 7.5 lakh

With the last word on this long-drawn battle still to be said, the club corridors are filled with whispers, discontent, charges, and countercharges. While Pathak is carrying on the task entrusted upon him and also making efforts to take the members along with him, support from the latter has not been too forthcoming. Recent media reports are filled with a whole lot of grievances they have voiced against the Government-appointed Administrator. A northeast festival, a Diwali play, and a few seminars hosted in the club premises have, particularly, come in for attack by some members.

An unfazed Pathak, however, is busy doing his job and is confident of infusing “a new soul, a new life” into this prestigious club

This club is being reinvented: Administrator

This club is being reinvented,” said Delhi Gymkhana Administrator Om Pathak in an exclusive chat with Blitz India. “The attempt is being made to infuse a new soul, a new life into this club,” he added.

One of the biggest problems with DGC, according to Pathak, was its membership, which was being given arbitrarily. “Jisko chaha de diye, jisko Nahin Diya (It was being given or denied to whosoever they wanted)”, he said. A one-man committee headed by Justice Naidu, a retired judge of the High Court, was appointed to look into this and its report is very damning, he disclosed. “Once it (the report) is implemented, a lot of people will be made to answer regarding the irregularities they have done so far in the membership”, said Pathak.

Talking about dynasticism, a charge frequently leveled against the club, Pathak said it should have no place in granting membership. “Anyone who wants to become a member should register, stand in the queue, wait for his turn and get the membership as per the procedure,” said Pathak. “How can dynasty play any role in a public institution like this?” he questioned.

Pathak scoffed at the fact that while some members’ children and even grandchildren have been granted membership of Delhi Gymkhana, those who have been waiting for 38 years after having paid a registration fee of Rs 1.5 lakh (which was Rs 7.5 lakh earlier) are still waiting. “I will bring an end to parivarwaad. It just won’t exist”, emphasized Pathak. He said the club members will be granted openly and transparently. “Everyone will come in the queue, there will be a proper procedure and whosoever is found eligible will get the membership”, insisted the Administrator.

Regarding the ongoing litigations, Pathak said though no timeline can be set as to when these will end; the Government has no intention of prolonging these or carrying on with running the club administration. “If people can run an institution on their own, with responsibility, then why not, he quipped.”

To a question as to when Delhi Gymkhana can be expected to become a common man’s club, a club promoting Indian culture that the Administration has been aiming at, Pathak replied that though he can’t specify any deadline about the reforms that are being carried out, “I can say with certainty that this 38 to 40-year-wait is illogical. It has no meaning.”

The Administrator concluded the conversation by saying that a large majority of Delhi Gymkhana Club membership comprises men and women of great eminence and creativity who have achieved a lot in their respective fields. They should all contribute their abundant talent and ability towards the creation of a new society that is taking shape in the country, he said.

Towards a New, Resilient India