NEW DELHI: September 2, 2022 was a historic day for the Indian Navy for more reasons than one. It not only got its first indigenous aircraft carrier but also got its new ensign.

As Prime Minister Narendra Modi tellingly said on the occasion, “Till today the Indian Navy flags carried a sign of slavery, which has been replaced with a new one inspired by Chhatrapati Shivaji Maharaj.” On January 26, 1950, the British Royal symbol that was in the Indian Navy crest was replaced with the lions of Sarnath pillar. The emblem of the Navy incorporated an invocation from the Rig Veda—Shaṁ No Varuna’—asking the Vedic Deity to protect us and herald auspiciousness.

However, the Indian Navy’s ensign still sported the Saint George Cross, the symbol of St. George, who helped Christians win their battle against pagans in early Rome and later against Muslims during the crusades. The Indian National flag was resting on one of the bars of the cross, in the top left. That this cross was imposed on Indian Navy despite independence spoke a lot about the need to decolonise. 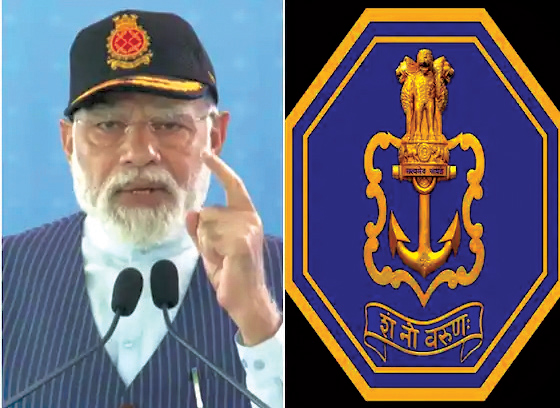 In 2001, under the prime ministership of Atal Bihari Vajpayee the cross was removed. Along with the National Flag, there were the three Ashoka lions, the National Emblem of India with an anchor. However, in 2004, with the Congress Party coming to power, St. George’s cross was brought back. Perhaps unintentional or otherwise, the national emblem was placed at the heart of the cross Now the Indian Navy ensign has been changed to reflect the ‘New India’.

The Saint George’s Cross has been removed. Instead, it now features the national emblem with the Tricolour on the upper canton (top left corner of flag). The national emblem is encompassed by an octagonal shield and sits atop an anchor. Beneath it is the Navy’s motto ‘Sam No Varunah’. The golden border surrounding the national emblem draws inspiration from the seal of Indian emperor Chhatrapati Shivaji Maharaj and depicts steadfastness. The octagonal shape of the national emblem has been designed to represent eight directions, symbolising the multi-directional reach and multi-dimensional operational capability of the Indian Navy.

According to PM Modi, the New India’s Navy will draw inspiration from Chhatrapati Shivaji Maharaj, who laid the foundations of a modern navy. Shivaji’s navy gave his enemies sleepless nights, the Prime Minister said, and this was the reason that the British colonialists decided to break the back of the Indian naval enterprise. “But now, the Indian Navy’s new flag, inspired by Shivaji, will fly proudly in the sky and on the seas,” he added.

As an official document released on the occasion pointed out, the Indian Navy has always acknowledged the sea-faring prowess of the Maratha empire under Shivaji and later. It has named a training establishment in Lonavla as INS Shivaji, and a shore-based logistics and administrative hub of the Western Naval Command, Mumbai, as INS Angre — after Kanhoji Angre (1669-1729), the celebrated Maratha naval commander. The use of the octagonal design of the seal of Shivaji on the new naval ensign is a formal stamp on the umbilical ties of the Indian Navy with the navy of the Maratha Empire.

“The navy under Shivaji was so strong that the Marathas could hold their own against the British, Portuguese and Dutch,” the official document noted. According to BK Apte’s pioneering book, A History of the Maratha Navy and Merchantships, Shivaji Maharaj was a visionary, who believed in India’s maritime power. Indian Navy’s new insignia brings this spirit of guarding India against all odds – the spirit of Shivaji Maharaj that was the foundation on which the institution of India’s modern navy is being built.

Reforms vital for a healthy WHO