Imprint of PM Modi’s diplomatic sway in the Middle East

In a welcome development, India and the United Arab Emirates (UAE) on February 18 firmed up a Comprehensive Economic Partnership Agreement (CEPA) during a virtual summit between Prime Minister Narendra Modi and Crown Prince of Abu Dhabi Sheikh Mohamed bin Zayed

The much anticipated virtual summit took place at a time when India is celebrating 75 years of independence and the UAE is marking its Year of The 50th. Negotiated in a record time of three months, it has resulted in the signing of the Free Trade Agreement.

With a focus on gems and jewellery exports from India, the CEPA shall prove beneficial for the Indian export market. India is also keen to step up its apparel and electronics exports to the lucrative West Asian market.

As India’s third-largest trading partner after the USA and China, the UAE is set to jack up trade with India and plans to raise it to $100 billion. In 2021, bilateral trade between India and the Emirates stood at $43.3 billion and was tipping towards the $60 billion mark before the pandemic struck. With CEPA and a waning economic effect of Covid, the trade volume is slated to rise substantially

After seven years of deepening bilateral ties, Prime Minister Narendra Modi and Crown Prince Mohamed Bin Zayed are ushering a new era in India-UAE relations, ramping up security, economic as well as cultural ties. The new trade deal is an unprecedented step towards bringing the two nations closer and an imprint of PM Modi’s diplomatic sway in the Middle East.

There is a personal bonhomie between PM Modi and Crown Prince Bin Zayed that drives this relationship to greater heights. The two nations cooperated closely during the pandemic with UAE committing to the welfare of the 3.5 million-strong Indian community living there. The Air Bubble agreed in August 2020 has helped most Indians to return for employment and business. India remains the top remittance destination for the Emirates and absorbed 33.6% of the total outflow in 2021, according to Khaleej Times, amounting to more than a trillion rupees.

From $3 billion in 2014, investments from the UAE in India have registered nearly a six-fold increase to $17 billion. In a snub to Pakistan, business groups from the Emirates are also investing in a post-Article 370 Jammu and Kashmir, strengthening India’s position on Kashmir in the community of Muslim nations.

Defence and security relations are also soaring. The UAE has helped in the overflight of the Rafale aircraft from France to India. There have been two visits by India’s Army Chief and Chief of Air Staff as well in the last two years. India also participated in the IDEX and NAVDEX 2021 exhibitions in Abu Dhabi and the Dubai Air Show in 2021. In fact, in the Dubai Expo, India was allotted one of the biggest plots and was given the right to retain the Indian Pavilion even after the Expo. As non-permanent members, both India and UAE are also coordinating positions in the United Nations Security Council. 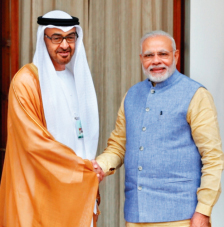 In terms of energy cooperation, a transformation in dynamics has already been witnessed with UAE’s participation in India’s strategic reserves and its offer to Indian companies to develop stakes in two oil fields. As the third-largest supplier of crude oil and the second-largest supplier of LNG to India, UAE is keen on taking energy cooperation to the next level with a focus on renewables.

Under Bin Zayed, the UAE has become an oasis of religious harmony in West Asia. A Hindu temple, a first of its grand nature in West Asia, is being built in the UAE. Abu Dhabi has provided a large plot of land for a grand stone temple that will stand strong for a thousand years. Indeed, the temple would serve as a symbol of harmony and tolerance in the UAE and its great ties with India.

Indian expatriate community of 3.5 million is the largest ethnic community in the UAE constituting roughly about 30 per cent of the country’s population. Nearly half of them are in the Emirate of Abu Dhabi and the rest are in the six northern Emirates including Dubai. Among the Indian States, Kerala is the most represented followed by Tamil Nadu and Andhra Pradesh. However, Indians from the northern states, all put together, also form a significant portion of the UAE Indian population.

Indians are well respected locally for their competence and civil behaviour. One Indian Community Association and 15 eminent Indians from UAE have been honoured with Pravasi Bharatiya Samman Award and six Indians— Yussuf Ali, Dr BR Shetty, Sunny Varkey, Dr JR Ganagaramani, Azad Moopen and Sundar Menon have been awarded Padma Shri by the Government of India.

There are six registered Indian associations in the UAE, which participate in various initiatives of the Mission. They also organise cultural programmes tapping local talent as well as bringing professional artists from India. The India Culture Centre, Abu Dhabi has conducted seven seasons of India festival in its premises.

WHO in need of urgent reforms

Numbers speak for themselves