Prayed at Kedarnath this morning.

Bearing the brunt of refugee crisis

Seventy years after the 1951 Refugee Convention when the United Nations first defined the term ‘refugee’ and outlined the rights of refugees, s well as the legal obligations of States to protect them, over 2 million refugees from Ukraine have crossed into neighbouring countries in less than two weeks — the fastest-growing refugee crisis in Europe since World War II. And Poland has borne the brunt of it. According to UNHCR, Poland has witnessed the highest influx of Ukrainians in comparison to its other European neighbours. Over 1.5 million have flooded it via eight border points with Ukraine. While some of those have moved on to other countries, a large proportion stays on. As refugees continue to flee from Ukraine to major polish cities –including the capital Warsaw – the Poland authorities have warned that they have reached their capacity to accommodate and help those arriving. They have called for an international system of support to be put in place.

In the past, successive nationalist governments in Poland after the collapse of the Soviet Union had adopted tight anti-refugee policies. In response to the Russian invasion, however, not only are Polish people being extremely receptive to fleeing Ukrainians, but even the Polish Government seems to have changed its colours regarding the conflict-induced immigration.
Polish authorities and citizens as well civil society organisations have been deeply involved in efforts directed towards the provision of relief materials in the form of warm clothes, blankets, and water at stations situated near the Ukraine Poland border.
The Government has relaxed border restrictions and also exempted the fleeing Ukrainians from showing their Covid-19 test reports. Those without any valid documents have also been granted safe passage, given the severity of the situation.

It has also agreed to make some social benefits available to Ukrainian refugees, which have, until now, been available only to permanent residents of Poland. Warsaw is drafting an emergency Bill that aims to make it more convenient for Ukrainians to access the Polish labour market.

At the height of World War II, when Poland was invaded by Germany and Russia, the Indian princely state of Jamnagar had offered shelter to 1,000 Polish refugees, way back in 1942. Eighty years later, Poland paid back in kind by going out of the way to welcome Indians stranded in war-ravaged Ukraine and earning special thanks from Prime Minister Narendra Modi. 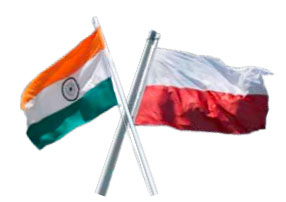 Restored as a nation in 1918 but ravaged by two World Wars, Poland suffered tremendously throughout the course of the 20th century. World War II was particularly damaging, resulting in the massacre of Poles in the Holocaust

Poland has not only ensured the safe evacuation of thousands of Indian medical students, but it has also offered them a chance to continue their studies
uninterrupted. The Polish Government has announced that these students can continue their education at local medical colleges from the point
where they had to leave Ukraine due to the war.

Restored as a nation in 1918 but ravaged by two World Wars, Poland suffered tremendously throughout the course of the 20th century. World War II was particularly damaging, resulting in the massacre of Poles in the Holocaust.

With the fall of the Third Reich, Poland effectively lost its independence once again, becoming a communist satellite state of the Soviet Union and becoming a member of the Warsaw Pact as opposed to the US-led NATO.

The fall of the Berlin Wall and the Communist regimes in Eastern Europe in 1989 resulted in the return of democracy to Poland and it finally became a member of NATO.

Throughout its chequered history, Poland and India have shared a long-standing friendly relationship. Diplomatic relations were established in 1954, leading to the opening of the Indian Embassy in Warsaw in 1957. Starting with Jawaharlal Nehru in 1955 to Prime Minister Narendra Modi in 2000, high-level visits have ensured the deepening of bilateral ties.

A cordial political relationship has emerged in the current century, particularly after Poland joined the EU in 2004, and became one of India’s key economic partners in Central Europe. Several bilateral agreements have been signed on facilitating trade, defence, waving of visa requirement of passport holders, extradition of offenders and prevention of tax evasion. A Parliamentary Friendship Group was constituted in both the Parliaments.

Poland is India’s largest trade partner and export destination in the Central European region, with bilateral trade growing almost seven-fold over the last ten years. Indian investments in Poland are valued at over $3 billion. Total Polish investments in India is estimated to be $672 million.

Poland possesses world-class food processing including preservation/storage technologies while India is one of the largest producers of many fruits, dairy and agro products. An MoU on agriculture for technical and institutional cooperation was signed between the two countries during the visit of the Vice-President of India to Poland in April 2017.

Thirteen Indian IT companies, employing more than 10,000 professionals, are currently active in Poland and are operating also their Europe operations from here. Indian IT companies including Infosys and HCL have a strong presence in Poland. Poland possesses reputed clean coal technologies and Polish public sector companies have played a substantial role in the development of mining and power sectors in India. Coal India Limited’s trainee engineers received training in Polish mines which specialises in intelligent mining. India and Poland signed a Memorandum of Understanding on February 4, 2019, in New Delhi to enhance bilateral cooperation in the coal and mining sector. 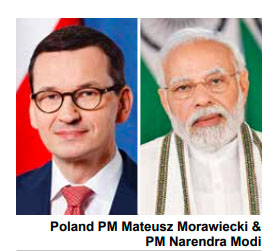 Given Poland’s strategic location, shortages in healthcare personnel and 25% growth in the pharma market in the last five years, there are good opportunities for Indian exporters and investors.

Beyond these sectorial relations, there is a strong tradition of Indology studies in Poland, with Polish scholars having translated Sanskrit into Polish as early as the 19th century.

The Indology Department of the Oriental Institute at the University of Warsaw (established in 1932) is the largest centre for Indian studies in Central Europe. The study of Indian languages, literature, culture and Indology is also pursued at the Adam Mickiewicz University in Poznan and the Wroclaw University.

After the first International Day of Yoga was organised in 2015, several Polish celebrities and ‘yoga ambassadors’ have joined the movement. Currently, around 1,000 centres and 8,000 teachers are propagating yoga, which has over 3,00,000 yoga practitioners in the country

No freebie: US has high stakes