The foreboding of Congress victory in Himachal was amply visible since November 2021 when the party had won the Mandi Lok Sabha and three key Assembly seats during by-polls. However, the Congress leadership’s confidence was so low that everyone expected the blitzkrieg campaign by the BJP to help buck anti-incumbency for the first time in 40 years.

The overconfident BJP leadership, thinking the “double engine sarkar” was a miracle formula, failed to read the writings on the walls which were staring them in their face. The BJP’s cliched election slogan of ‘Riwaaz Badlega, Raj Nahin’, boomeranged. The Himachal tradition since 1985 continued booting the incumbent out, the outcome ended up as Raj Badal Gaya, Riwaaz Nahin.

What rocked the BJP boat?

What caused the BJP debacle in Himachal? Answer: “it’s the economy stupid.” Although Himachal is the most prosperous and literate small state in the country, yet voters were livid against the mismanagement of the economy. High unemployment, record inflation and the Covid mishandling hurt majority of the voters. With over 250,000 Government employees, Congress’s electoral promise of restoring the Old Pension Scheme (state Government taking care of retirees 100 per cent compared to the new pension scheme where Government employees have to match from their salaries the Government’s contribution) worked wonders for the GOP. BJP’s promises of reducing GST to 12 per cent on apple packaging was simply not enough for a fruit-based economy which suffered enormously with supply chains disrupted. The BJP’s internal factionalism within the state surfaced visibly during ticket distribution for the Assembly polls. Denial of tickets to 11 sitting MLAs, including two ministers and the fielding of 23 new candidates (several crossovers from the Congress Party) led to a string of rebellions. The rebels filed nominations from 14 seats, three of them won against the BJP leaders. 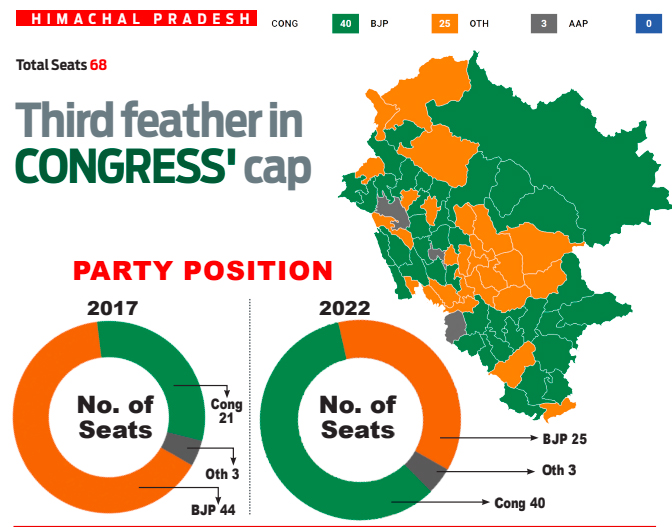 The decisive Congress victory in Himachal has generated enormous hope and optimism for the GOP since it’s the first victory for the party after the winter of 2018 when the Congress won Madhya Pradesh, Rajasthan and Chhattisgarh. Breaking the jinx of the Congress Party’s losses, this is the first victory for the GOP after the 2019 Lok Sabha polls. Himachal has finally added another feather to the Congress’s cap, of three states: Rajasthan, Chhattisgarh and now Himachal.

The Himachal victory is likely to boost the Congress’s morale ahead of the Assembly elections in nine states of Karnataka and Telangana, in the South, Meghalaya, Mizoram, Tripura and Nagaland in the North-East and Rajasthan, Madhya Pradesh and Chhattisgarh in the Hindi heartland. The Congress is in power in Rajasthan and Chhattisgarh and hopes to win Karnataka from the BJP in 2023. The outcome of these nine states is crucial for the Mahabharata of all battles, the Lok Sabha elections of 2024.

Steps needed to unleash the power of women collectives

A new phase in India-Brazil ties

Budget to help in execution of NEP, says PM Modi