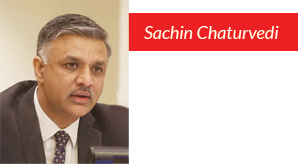 The Bali Declaration has highlighted several key challenges. The challenges that come on a worldwide scale include climate change, the Covid-19 pandemic, and the developments in Ukraine. These caused havoc in the world and disrupted global supply chains. The current shortage of fertilisers in terms of food security is also a huge crisis. Today’s fertiliser shortage is tomorrow’s food crisis, for which the world will not have a solution.

As Indian stage is getting set for hosting of the G20 presidency, several issues are coming on table for possible push from Indian side. However, consolidated attention on finance would be of great relevance for several member countries and also for the global economy. As Prime Minister Narendra Modi said at the Bali Summit, we need new efforts for issues hitherto being dealt by the UN and other multilateral institutions.

In the realm of finance, two tracks are important. First, to address the huge global debt crisis we are heading for. Debt relief by official creditors was made available through the G20 Debt Service Suspension Initiative (DSSI), which the IMF, together with the World Bank, helped to support. The initiative took effect in May 2020 and delivered $12.9 billion in debt relief to 48 countries before it expired in December 2021. However, within last few months more than 55 developing and least developed countries have knocked at the door of the IMF for support. The IMF would have to consider surcharge reduction for next 2-3 years and extend the access limits for another two years after 2023 and rechannelling of SDRs to call for more pledges than what has been seen so far. This would also require an urgent attention on further capitalisation of regional development banks.

The second track is to avoid fragmentation of financial markets, keeping financial stability perspective upfront. At various sessions at the CoP27, it emerged how adverse impact fragmentation of finance has created for several developing countries. The growing cost of accessing funds has posed a major challenge for the global South. The Bank for International Settlement (BIS) has reported that rising fragmentation creates natural barriers and friction across financial systems, disrupting financial cycles and may post challenges for regulation and supervision. In the climate finance, with shrinkage of ODA, it is a challenge to access finance for adaption and not just for mitigation. Most of the non-concessional private finance for climate change is available only for mitigation projects like for electricity transmission upgrade and agriculture, etc.

Nearly $325 billion annual funding of renewable energy is being undertaken through private equity and through market rate debt. It is only in the African region, and that also only to a limit of 13 per cent, that some concessional financing has come for supporting renewable energy production. There are several proposals on the table to extend concessional financing under climate finance to middle income countries. The IMF would have to take a lead to make climate finance more incentive-compatible and allow more lending-into-arrears.

The Bali Summit Declaration and the outcome documents from various engagement groups during the Indonesian G20 presidency, as in the past, have highlighted the need for redesigning of the global financial architecture. The Declaration has rightly called for “protecting macroeconomic and financial stability and remain committed to using all available tools to mitigate downside risks, noting the steps taken since the global financial crisis to strengthen financial resilience and promote sustainable finance and capital flows.”

Indian G20 presidency should also facilitate discussion on smooth and irreversible transition of LDCs to the category of developing countries. In our own neighbourhood, Bangladesh, Bhutan and Nepal would be undergoing this transition in 2026. They would need financial support and hand holding. Sri Lanka and Pakistan are grim reminders of irresponsible debt creation. In March 2022, the UN also recognised 15 more countries for the next decade. The UN Committee for Development Policy, which establishes the category of least developed countries (LDCs) since 1971, has evolved multivariate criteria for graduation.

With the conclusion of the Bali Summit and taking over of the presidency by India, a new opportunity has come up for Indonesia, Brazil and South Africa to work together to take global economy forward. With wide ranging fears over runaway inflation, financial instability, disruption in supply chains affecting, in particular, access to food and energy security, the world should take note of what PM Modi has advised to overcome disagreements over the war. Peace and development, in an inclusive framework, provide financial resilience and institutional coherence. We would undermine it to our own peril.

An ICS who had ‘intimate birth connect’ with Britain

Message of hope and peace

Message of hope and peace

The Times They Are a-Changin