France and India share a common belief in the importance of multilateralism and hold deep respect for international rules and regulations. These shared values have formed the basis for a cooperation agenda that was deepened and broadened during Prime Minister Narendra Modi’s recent talks with French President Emmanuel Macron.

Modi’s visit to France on May 4 was his fifth since 2015, and the 10th was such a high-level bilateral visit. Paris and Delhi have a wide range of complementary and converging interests. Indeed, they have long been reliable partners, and friends in need. The new level and depth in the bilateral relations have acquired a special strategic significance in the context of the raging war between Russia and Ukraine. India’s most trusted ally, France, has agreed to help India in decreasing its heavy reliance on Russian defence supplies. The recent agreements between India and France to further the cooperation on advanced defence technology could potentially reduce New Delhi’s dependence on Russia for procuring military hardware.

Underscoring the “long-standing armament cooperation” that includes the “transfer of technology from France to India,” the two leaders agreed to France’s deeper involvement in India’s “self-reliant” efforts in advanced defence technology. This was mentioned in the joint statement issued after their talks.

Over the past five years, Russia supplied about half of India’s weaponry, according to estimates from the Stockholm International Peace Research Institute. France provided over 20 per cent of arms during that span.

But looking at 2020 alone, France was India’s top arms dealer, exporting more than $1 billion worth of military hardware, compared with $970 million of weapons from Russia. Western nations have ramped up military ties with India to encourage a shift away from Moscow.

The joint statement further stated that India and France share a vision of an Indo-Pacific region. This was based on their commitment to international law, respect for sovereignty and territorial integrity, freedom of navigation and a region free from coercion, tensions and conflicts.

The statement is a veiled swipe at China’s maritime expansionism. The two sides expressed a keen desire to cooperate over a wide range of areas in the Indo-Pacific region, including defence, trade and investment.

By building coalitions to contain the expansionist behaviour of China and defending the values of multilateralism, India and France must translate their converging views on the Indo-Pacific into action

The idea of the Indo-Pacific is being increasingly operationalised, both by countries in the region, and those with interests within the region.

There are similarities between India and France’s definition of the Indo-Pacific strategy on issues of inclusivity, sovereignty, engagement and freedom of navigation. This has created room for further cooperation.

The two countries must continue to work together in areas such as maritime domain awareness, terrorism, cybercrime, piracy, disaster relief and the blue economy. Engagement on a multilateral level through the QUAD, ASEM and trilateral engagements such as the India-Australia-France dialogue must also take place.

By building coalitions to contain the expansionist behaviour of China and for defending the values of multilateralism, India and France must translate their converging views on the Indo-Pacific into action. 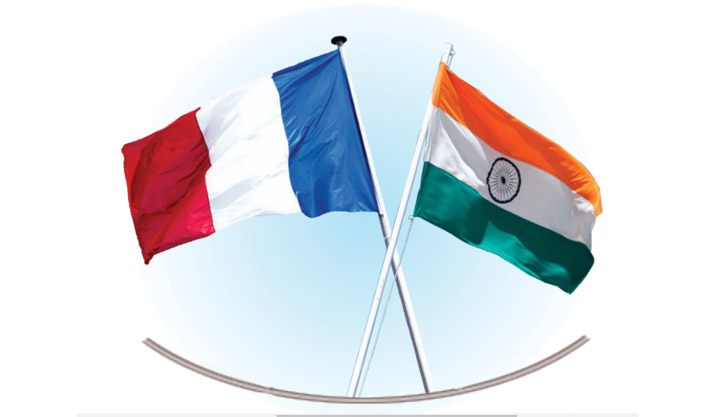 Regardless of the chosen format for cooperation, India’s role as a natural partner to France within the Indo-Pacific framework is unmistakable. Considering the similar aspirations France and India have towards sovereign, secure and democratic regulation of technology, there are many areas they can collaborate on.

The rapidly changing nature of the technology industry calls for fast track initiatives for cooperation in areas such as data protection, data localisation investment in Indian technology companies and supply-chain diversification.

Much like International Solar Alliance (ISA), initiatives to help developing countries build up their digital identity can also be jointly undertaken. Furthermore, India and France must work together on international regulations for digital data, to ensure independence from both China and the US.

In regard to climate initiatives, both India and France are undertaking important steps to push their climate commitments further, this year leading to new momentum and increased climate ambitions.

However, multilateral forums have largely failed developing nations on this front. As with the ISA, France and India can spearhead the development of multilateral initiatives which accommodate the voices of those who are most at risk.

The ISA can move to provide incentives for low and middle-income countries, by leveraging finances to fund renewable energy projects. India should be viewed as a partner to Europe in relation to establishing the Green Deal and facilitating climate diplomacy.

To achieve Sustainable Development Goals (SDGs), the overarching view is that there is no better tool to direct investment than a concrete policy. India and France can work towards creating a financial mechanism within the ISA and develop action-oriented and need based multilateral initiatives to tackle climate change.

EU PRESIDENCY A BOON FOR INDIA

It’s not every year that France, India’s principal ally in the European Union, holds the presidency of the Council of the EU. In fact, the last time France took over the mantle of the Council, which brings together relevant sector-wise ministers of all EU member states, was in 2008.

This year, France took over the six-month rotating presidency of the Council of the EU on January 1, with an aspiring agenda involving regulation of digital giants, minimum wages in Europe, Schengen reform, and enhancing European defence and security complementary to NATO.

The presidency is a pivotal opportunity for France to determine the EU agenda, influence its decisions, find a compromise with the remaining 26 member states and liaise between the Council and other EU institutions.

For India, the French presidency could not have come at a more opportune time. Ties between the two nations are on a steady upward swing, with French Defence Minister Florence Parly poetically describing it as a “lessening of the distance between the Ganges and the Seine”.

One needs to only look at the record number of times French Presidents have been chief guests at India’s Republic Day Parade to recognise France’s continuous importance to India over the years In more recent years, in tandem with the India-France partnership, the previously rocky EU-India partnership is also at an all-time high.

India must capitalise on the timing of France’s presidency and the strength of its relationship with France to push through its goals at the EU level.

As a starting point, India has already pushed France to advocate for an EU ban on weapon sales to Pakistan during its presidency.

It would be in India’s national interest if, in the post-Merkel era, Macron could use his increased leverage at the EU level to manage a greater Franco-German security alignment in line with his French vision, which also largely aligns with the Indian vision.