India’s glorious victory in the Thomas Cup championship has enhanced the country’s prestige in world badminton. The triumph ranks with the greatest moments in the history of Indian sports. The cream of the world’s badminton players will now take Indian players very seriously.

No longer can India be considered a pushover because it now has a large number of world-class players. The Thomas Cup win is testimony to India’s rise as a power in the sport.

The challenge is to build on this triumph and not let the momentum slip. Badminton is one of the few mass sports that’s played in almost every corner of the country. So, even though Hyderabad and Bengaluru will continue to remain the hubs, it’s important to establish academies that can spot and harness players from other regions in the country. Vimal Kumar, the soft-spoken player-turned-coach, was quick to proclaim that this moment can be to Indian badminton what the 1983 World Cup was to Indian cricket. It’s hard to dispute both claims. There are shades of ’83 in ’22: the stories of personal struggles and redemptions, the underdog element, and beating the most successful nation in the tournament’s history, 14-time champions Indonesia, to reach the top.

And this is no fluke. The title comes on the back of years of relentless hard work and an outcome of a system that has constantly churned out players who, on their day, could upset the best in the world. That even players like B Sai Praneeth, a 2019 World Championship medallist, could not even make the team, coupled with the fact that India has seven players in the world’s top 50, points to the depth in men’s badminton right now. Prime Minister Narendra Modi has congratulated the Indian badminton team for winning the Thomas Cup.

In a tweet, the PM said: “The Indian badminton team has scripted history! The entire nation is elated by India winning the Thomas Cup! Congratulations to our accomplished team and best wishes to them for their future endeavors. This win will motivate so many upcoming sportspersons.”

Complete team performance in the finals, India’s win was set up by the grit of Lakshya Sen who defeated Anthony Ginting despite a shaky start in his first game. After Sen, the doubles duo of Satwaiksairaj Rankireddy and Chirag Shetty held their nerve in the doubles game to give India a crucial lead. In the first match of the tie, world number nine Lakshya Sen squared off against world number four Anthony Sinisuka Ginting.

This was Indonesia’s 21st final at the mega event and it is the most successful team with 14 titles. However, this time, it was up against an Indian side that kept coming back after every blow and eventually turned it around to deliver the knockout punch.

I’m at a loss of words right now. After 73 years since the first Thomas Cup was played, India has finally made it to the list of winners, and how – beating the 14-time champion Indonesia 3-0 in the final. Truly, celebrating Azadi Ka Amrit Mahotsav! New India rising! 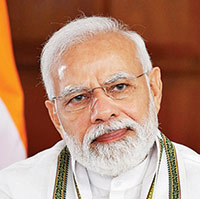 “The Indian badminton team has scripted history! The entire nation is elated by India winning the Thomas Cup! Congratulations to our accomplished team and best wishes to them for their future endeavors. This win will motivate so many upcoming sportspersons”

Assam has emerged as a frontrunner in the SDG India Index

A pioneering figure in EV space