Opportunities and challenges before Indonesia

NEW DELHI: Indonesia took up the presidency of G20 at a very crucial time. The world is still recovering from Covid-19 pandemic. Even today there are countries where people are facing lockdown and going through massscale quarantine drives. This has fractured the global economic recovery.

Adding to that, inflation, climate change, supply- chain disruptions and Russia-Ukraine war have fueled uncertainties of unprecedented scale. And this has the potential to spiral beyond temporary setback – from derailing the efforts to achieve 2030 Sustainable Development Goals to global recession.

For its year-long presidency from December 1, 2021 to November 30 this year, Indonesia has chosen to focus on the world economic recovery.

Its theme is ‘Recover Together, Recover Stronger’. It has vowed to work towards joint and inclusive efforts in finding a way out of the Covid-19 mess. Under this umbrella theme, Indonesia is focusing on three priority areas: global health architecture; sustainable energy transition; and digital transformation. These reflect Indonesia’s focus on both immediate recovery efforts and longer-term sustainable development pathways. It also highlights that the island nation has brought the 2030 Agenda and the SDGs at the forefront of the G20.

To its credit, Indonesia has kept the spirit of inclusiveness alive. It has emerged as the benefactor of those who are outside the ambit of G20 – developing countries, small Island developing states, and vulnerable groups. It has invited nine countries to participate in discussions and meetings; these are Spain, Chair of the African Union, Chair of the African Union Development AgencyNEPAD (AU-NEPAD), Chair of the Association of Southeast Asian Nations (ASEAN), Netherlands, Singapore, United Arab Emirates, Chair of The Caribbean Community (CARICOM), and Chair of the Pacific Island Forum (PIF). Also, it has invited ten international organisations like the ADB and the ILO. 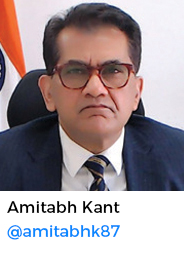 India’s G20 Sherpa Amitabh Kant met with his counterparts from Spain, France, Germany, UK and USA and discussed Green hydrogen, Climate finance, SDG implementation & other global issues, on the side lines of the 3rd Sherpa meeting, 27- 29 September in Yogyakarta, Indonesia.

G20 Sherpas are there to discuss the leaders’ declaration draft for the November G20 Leader’s Summit. The key agenda of the Kant’s visit is to facilitate successful transition from the Indonesia’s Presidency to India.

But the dark clouds of RussiaUkraine war loom over Indonesian tenure’s success. There is immense pressure on the country to debar Russia from taking part in the G20 discussions and meetings. In April this year, several G7 Finance Ministers staged a walkout to protest Russian participation. Again in July, during the G20 Foreign Ministers’ meeting, the Russian Foreign Affairs Minister walked away after being cornered on multiple instances over his country’s action in Ukraine.

These walkout and boycotts possess one of the biggest challenges to the Indonesian presidency as it leaves very little room for building consensus and taking concrete steps to achieve objectives set by it.

Until now, Indonesia has done extremely well and stuck by the original agenda. But, it is going to be a tough road ahead. The nation needs to focus on making sure that the twoday summit on November 15-16 runs smoothly. It will require a great deal of diplomatic maneuvering to ensure that no boycotts or walkouts take place and that some productive agreement can be reached.

The intention to create G20 was to focus primarily on global scale economics and business related issues. But, the group has yet to figure out how do deal with war and issues of national security. It can be argued that the United Nations is better placed for tackling such issues; but G20 must figure out how it can deal with politicisation of the forum.

Poverty in the ‘city of billionaires’

Poverty in the ‘city of billionaires’