Walk through the streets of a couple of cities in Vietnam after a gap of ten years, and you may find a completely different Vietnam. You may fail to recognise that this is the country, which was once described as ‘an epic tragedy’ by Max Hastings. The country, till very recently, was remembered for its Socialist incarnation under Ho Chi Minh, which made the mighty superpower like the US bite the dust. The glorification of Vietnam, as a result, became a phenomenon of contemporary history. 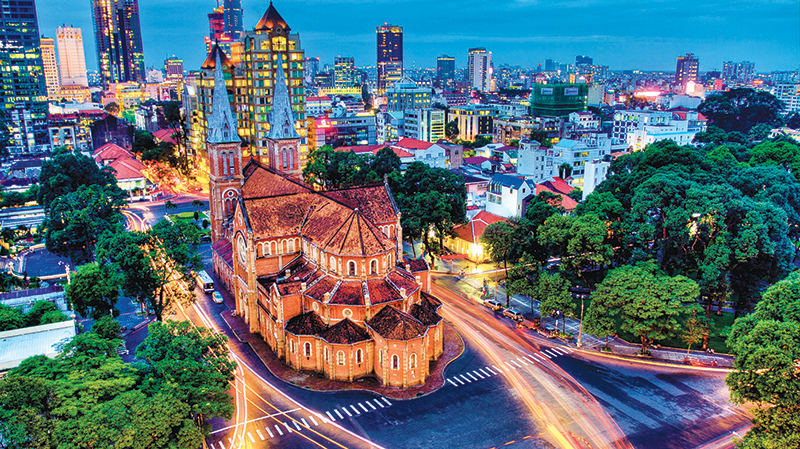 However, after the end of the Cold War and the Communist regime, Vietnam has charted a new course for its economic progress. In the initial years, it looked like a pale shadow of the Asian tigers which roared with the real and imagined Western collaborations. Slowly but steadily, Vietnam has carved a niche for itself as an emerging Indo-Pacific nation.

Vietnam is one of the Southeast Asian countries, bucking the global trend of stagflation and attracting tourism, and also becoming an impressive export house. Western media says tigers are roaring back but it is missing to mention that a new tiger, called Vietnam, has joined the roar. Many old Southeast Asian tigers are stagnating.

Like some of the Southeast Asian countries, Vietnam’s gross domestic product (GDP) growth is higher than the inflationary pressure. Its GDP growth rate is marginally higher than 5 per cent and its inflation rate is 2.64 per cent. The cause for this remarkable recovery is its ability to take a fast decision on Covid-19 designating it as an endemic. This has enabled it to ease restrictions and become a destination of revenge tourism from all over the world.

In my direct flight from Delhi to Ho Chi Minh City, I found most of the Indians going to Vietnam for tourism. On the way, I learnt that it had become one of the favourite holiday destinations for Indians in Southeast Asia. Of the reasons mentioned, I found easy online e-visa as the key factor for choosing Vietnam. Of course, it has several tourist attractions.

Besides, over the years, Vietnam has emerged as a significant beneficiary of the shifting of business away from China. Several Western companies are creating their production bases in Vietnam. Apple’s i-pads are going to be produced in the country. The recent zero-Covid policy of China has further helped Vietnam in replacing China to maintain the supply chain order. Electronics, textiles and footwear sectors have benefited the most.

Many are talking about the idea of ‘friend-shoring’ after the UkraineRussia military conflict and the ChinaUnited States trade war. There is a consensus that Vietnam is going to take advantage of it as many of the companies are not going to invest in sanctions-prone Russia or China. The future seems to be extremely bright for the Vietnamese economy.

Here comes the question: Where does India-Vietnam relationship figure in the changing environment in Vietnam? Will it be restricted to the travel of a few thousand Indians? The answer to it is certainly challenging for India.

Statistically speaking, in 2021-22, India and Vietnam traded for $14.4 billion. In the bilateral trade, the share of Indian exports was $6.70 billion and that of Vietnam $7.44 billion. In the same financial year, Vietnam positioned itself as the 23rd-largest trading partner of India.

India has been exporting items such as iron and steel, cotton and chemical products. Its export profile also has food products and engineering goods along with pharmaceutical items. In the defence field, India is deepening its relationship with Vietnam. The Indian Defence Minister visited Vietnam this year. During the visit, he delivered 12 high-speed guard boats built with the Indian $-100 million defence line of credit to Vietnam. The visit also witnessed a $-5 million grant to Army Software Park and a $-1 million gift for establishment of a language and IT laboratory for the Vietnamese Air Force. India thus has to consolidate its multidimensional relationship.

A barrier-breaker in Indian science