On page one we predicted that in Gujarat assembly polls in early December it is advantage BJP. We argued that BJP’s 32 years in power is what election experts call an “electoral realignment.” This electoral realignment was kickstarted by the then CM of Gujarat Narendra Modi. Today it is the ‘Narendra-Bhupendra double engine Sarkar, which is the slogan for BJP, and PM’s speech “We have made this Gujarat,” the biggest inspiration that mesmerizes voters. Other than the charisma of Modi, what else is the cause of such a durable realignment for the BJP in Gujarat? 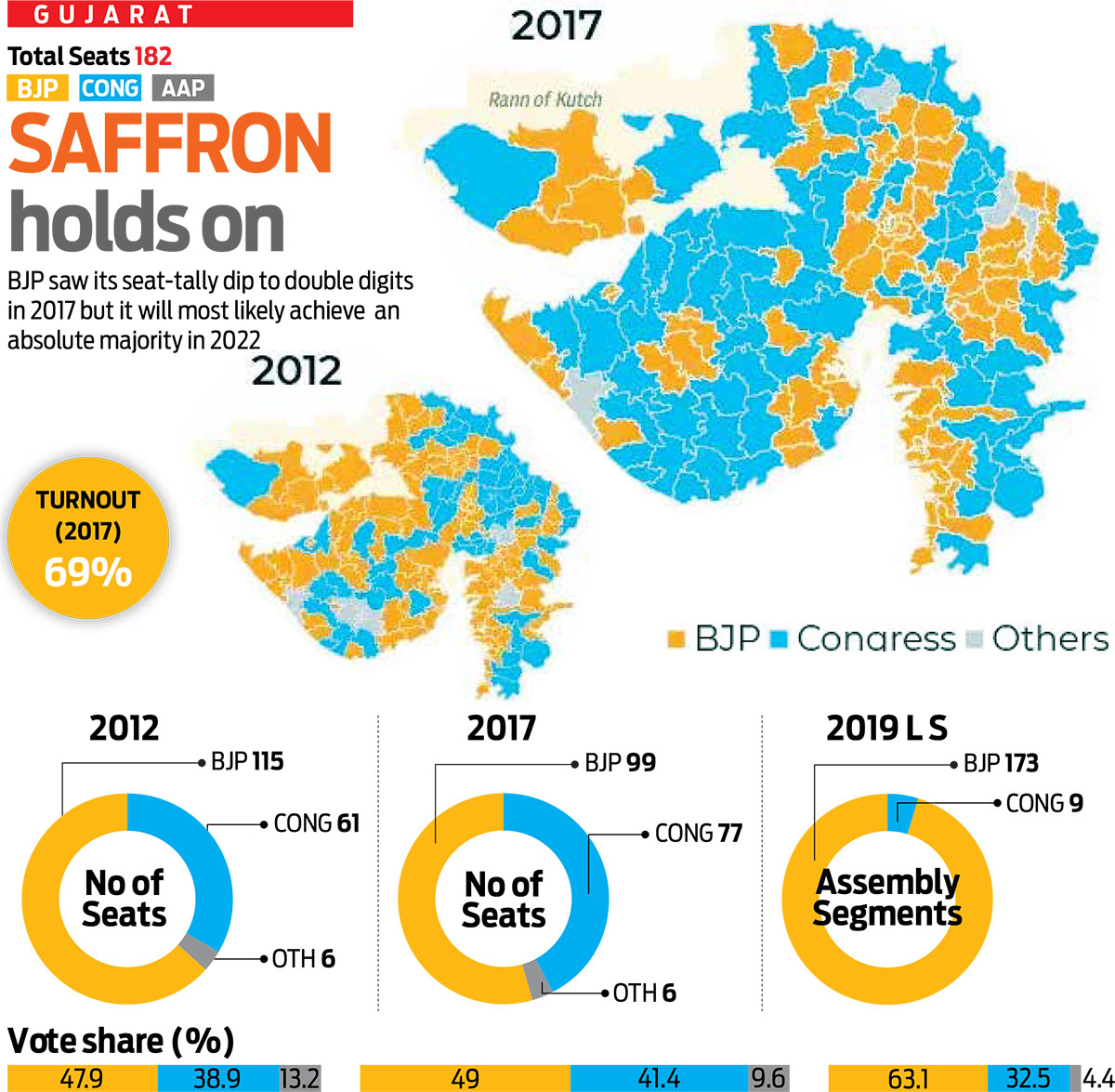 Short answer: the success of the Gujarat model. The Gujarat model, which was the centre of debates among economists is essentially a story of gushing growth that brought overall prosperity to Gujarat from 2000 to 2013.

With 6 % of India’s land mass and 5 % of its population, Gujarat accounts for 7.6 % of the country’s GDP and 22 % of its exports. Its annual GSDP growth from 2001 to 2013 averaged 10 %, which is faster than most states, an extraordinary accomplishment for a developed state. Between 1980-2013, Gujarat grew at 5.1 %. If Gujarat were a country with a 10 million-plus population, this would be the third-fastest growth rate in the world, after China and South Korea.

The Gujarat model begins by pushing high agricultural growth of around 8 per cent during this period. But unlike Punjab and Haryana, where the impetus for high agricultural growth emerged from state intervention, in Gujarat, the boost in agricultural productivity and growth was a result of market-oriented policies with adequate government support to farmers. The revolution in milk production via Amul is a well known story.

Given a 1600 km coastline, historically, Gujarat had a strong entrepreneurial culture which boosted industrial growth. Agricultural surplus and huge capital reserves gained due to trade with foreign countries like the Middle East and Africa turned to industrial investment. Gujarat again stole a march over Punjab, where agricultural surplus was largely wasted in conspicuous consumption.

The Gujarati diaspora, largely traders (Patels in the US motel industry, shopkeepers in UK and Kacchi Banians (from Vaniyas) in the Persian Gulf countries helped boost growth via investment in their native state. The dizzying popularity of Modi among the diaspora, helped attract foreign capital. The Gujarat model is a story of private capital, infrastructure development, role of traders and entrepreneurs from home and abroad and agricultural surplus, all leading to boost industrial growth. Infrastructure development focused on roads, airports, seaports and power plants.

What factors helped accomplish the Gujarat growth story? Was it geography, native entrepreneurship, a historical edge in commerce and trade or simply good governance? Did Gujarat’s 1,600 km coastline contribute to its gushing growth? Gujarat has served as an integral native trading hub for centuries, one of the most dominant in the Arabian Sea.

In general, coastal states have shown higher growth than the BIMARU (an acronym for Bihar, Madhya Pradesh, Rajasthan and UP, referring to their poor economic standing) states in India. A coastal state has the twin advantages of greater global access as well as lower transportation costs. Other coastal states, such as Maharashtra, Tamil Nadu, Kerala, Karnataka and Andhra have also performed well.

But sustaining rapid growth, as Gujarat has done, is not easy. Almost 25 per cent of India’s sea cargo passes through Gujarat’s ports.

Was it the renowned Gujarati entrepreneurial spirit that helped bring about Gujarat’s transformation from being only the seventh richest big state in 1980-81 (in terms of per capita GSDP) to the third richest in 2013-14?

Was it the leadership of Modi in the last 25 years that brought about this turnaround in Gujarat’s fortune? Whatever the reasons, India’s business capital which was located in Mumbai in the yesteryear has moved towards Ahmedabad and Surat. India’s political capital, located in UP which produced 9 PMs, has also shifted westward to Gujarat, producing Prime Minister and Home Minister.

Became Gujarat CM from 12 September, 2021 although he is a first term MLA from Ghatlodia constituency. He replaced Vijay Rupani as CM. With a diploma in civil engineering, Patel’s biggest achievement is his launch of a new Gujarat IT/ITeS policy (2022-2027) on 8 February. Slogan: “NarendraBhupendra double engine Sarkar”.

Is a lawyer trained at Stanford University in LLM and Doctorate, in Northern California, in the US and a Congress leader from Gujarat. On 15 March, 2018, she was elected unopposed to the Rajya Sabha from Gujarat. She has been fielded as the MLA candidate from Ghatlodia against BJP’s chief minister Bhupendra Baghel.

Is the new CM of AAP for the Gujarat assembly elections, announced by Delhi Chief Minister Arvind Kejriwal on 4 November 2022. Gadhvi is the AAP’s National Joint General Secretary and a member of its National Executive. Gadhvi, Editor of VTV News, was the anchor of Mahamanthan on VTV, Gujarati.