Africa ‘source of hope’ for world

UN-AU collaboration ‘stronger than ever’: Guterres

UN Secretary-General António Guterres said that Africa was “a source of hope” for the world, highlighting the examples of the African Continental Free Trade Area and the Decade of Financial and Economic Inclusion for African Women.

Guterres also argued that, for the last 20 years, the African Union (AU) “has helped to bring this hope to life, to enable the continent to realize its enormous potential.”

The UN chief addressed the 35th Assembly of the Heads of State and Government of the AU, in Addis Ababa, via a video message.

According to Guterres, the collaboration betweentheUNandAU“is stronger than ever”, with the 2030 Agenda for Sustainable Development and Agenda 2063 (Africa’s blueprint for a peaceful, integrated, and more prosperous continent)as the central pillars.

The Secretary-General argued that “injustice is deeply embedded in global systems”, but it is Africans who “are paying the heaviest price.”

He remembered that the vaccination rate in high-income countries is seven times higher than in Africa and stated that “a morally bankrupt global financial system has abandoned the countries of the South.”

Because of that, Guterres said, tens of millions of people are displaced across the continent, and the democratic institutions are in peril. The SecretaryGeneral then offered the UN’s support to ignite “four engines of recovery.” 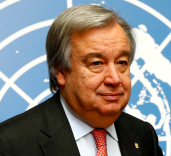 UN and AU “is stronger than ever”, with the 2030 Agenda and Agenda 2063 (Africa’s blueprint for a peaceful, integrated and more prosperous continent) as the central pillars

First, he said, everyone needs to get their vaccine.

In this regard, he highlighted the African Vaccine Acquisition Task Force (AVATT) and the benefits that greater vaccine production in South Africa and other African countries will generate

“I urge you to create the conditions for the number of African countries capable of producing tests, vaccines, and treatments to multiply, including by addressing intellectual property issues and providing the technical and nance needed”, he said.

He called for re-directing Special Drawing Rights – an IMF-created reserve currency asset – to countries that need support now, reform of the international debt architecture, and more concessional forms of nance.

Thirdly, the UN chief pointed to a green recovery across the continent.

The vast continent contributes just 3 percent of global greenhouse gas emissions, but many of the worst impacts of climate change are being felt there.

Answerable to the Constitution alone

Africa ‘source of hope’ for world