On August 20, 1995, the revered 5th spiritual successor of Bhagwan Swaminarayan, His Holiness Pramukh Swami Maharaj, gave London its greatest gift in the form of a magnificent Hindu Mandir.

Today, the BAPS Shri Swaminarayan Mandir stands majestically as Europe’s first Hindu masterpiece of exquisite Indian craftsmanship. It is the biggest traditionally built temple outside India. Popularly known as the ‘Neasden Temple: the Mandir is a traditional place of Hindu worship designed and constructed entirely according to ancient Vedic architectural texts-using no structural steel whatsoever.

The Mandir was first envisioned by His Holiness YogijiMaharaj, the predecessor of His Holiness Pramukh Swami Maharaj.

A traditional stone Mandir of this size and intricacy in London posed its own unique set of challenges. Architects, engineers and scholars from BAPS-both in the UK and India-teamed up with Sompuras ( traditional temple architects) in India along with experts and consultants from London to create a project team. The Mandir had to conform to India’s ancient architectural texts, the Vastu Shastras, and yet also meet the requirements of Britain’s stringent building code.

A key question for the engineers was that of material. While it was granted that the Mandir would be made of stone, which type would be able to withstand the harsh, wet and wintry British climate? Added to this was the VastuShastra tradition of temple masonry being self-load-bearing-with no steel reinforcements or structural support. But while it had to be durable and sturdy, the stone also needed to be receptive to intricate carving.

Eventually, it was decided to opt for a combination: Bulgarian limestone on the outside, and Italian and Indian marble on the inside. 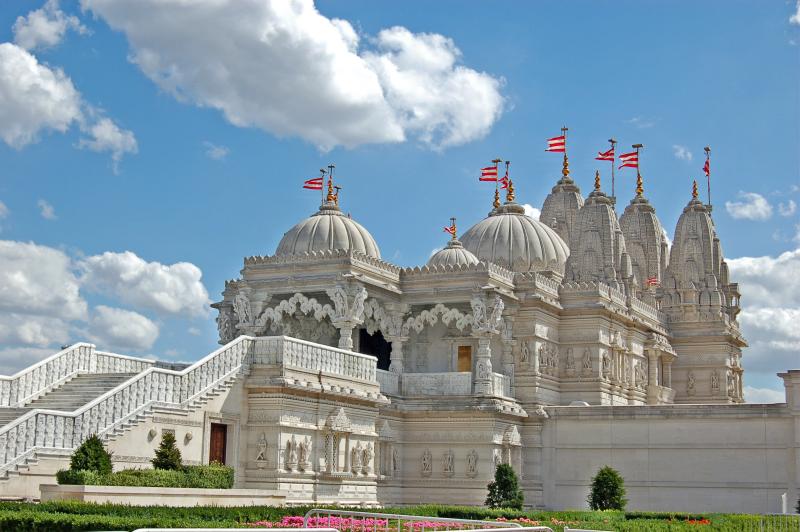 For the interior with its intricate carvings, marble was the preferred choice. It is relatively soft and easy to work, refine and polish, and is said to become harder and more durable as the sculpted stone ages.

Ambaji marble from northern Gujarat, India was chosen for its snow-white colour and pure, vein -free finishing. But with the large quantity required within the tight construction schedule, marble also had to be sourced from Italy’s popular stone-city of Carrara in Tuscany. Famed for its consistent white colouration, smooth texture and considerable strength, it proved ideal for load-bearing columns, beams, walls, and internal flooring.

Architectural designs of the Mandir now had to be transferred from paper onto stone. For each carved piece, a fullscale drawing was created, from which a metal stencil was prepared. Based on the metal stencil, the designs for each piece were etched onto the stone with approximate contours. Now the specialised craftsmen took over. With their innate skill, concentration and patience, they diligently chipped away to create the intricate designs and figures.

From each of the 14 workshop sites around Gujarat and Rajasthan, the boxes of stone would make their way to the port at Kand.la, before being loaded onto ships destined for England over 6,300 miles away.

The 26,300 pieces were transported in about 40 consignments to Southampton and occasionally Felixstowe. The first consignment left the dock on April 15, 1993;thelast onJune 16, 1995.

Meanwhile on the site in London, demolition of the old garage and warehouse had begun in August 1992 soon after detailed planning permission had been granted by the local authorities. Now the foundations needed to be laid before the winter freeze. In October, work on the mass piling began. A total of 194 piles, each 2 feet in diameter, were driven between 23 to 36 feet into the ground.

At 6.30 am onNovember 24, 1992, work started on laying the foundation. Once the deep concrete foundation had been set, the building blocks could be assembled. On June 12, 1993, the first granite stone was ceremoniously laid.

Maldives: India First vs. India Out