NEW DELHI: Rajpath, the three-km road stretch from Vijay Chowk to India Gate, which has been witness to many regal celebrations before and after Independence, has been rechristened as ‘Kartavya Path’ (path of duty). Inaugurating the newly-laid historic stretch on September 8, Prime Minister Narendra Modi also unveiled the statute of Netaji Subhash Chandra Bose under the Indian Gate canopy.

“Kartavya Path is not just a road of bricks and stones,” PM Modi said on the occasion. “It is a living example of India’s democratic past and all-time ideals.

The spirit of New India

When the people of the country come here, the statue of Netaji, the National War Memorial, all these will give them such a great inspiration, they will inculcate their sense of duty,” he said. “Today the country has also established the life of a modern, strong India by installing the statue of Netaji at the same place,” he added. The Prime Minister emphasised that these changes are not limited to symbols but now form part of his Government’s policies. He cited several decisions, including repeal of repugnant colonial laws and abrogation of special status to Jammu and Kashmir, to stress the point. In a swipe at previous Congress governments, he said had India followed the path shown by Bose, then it would have reached new heights; but the iconic leader was forgotten and his symbols and ideas ignored. “The imprint of his ideals and dreams are now visible in the BJP Government’s works,” PM Modi emphasised. Noting that Rajpath was also known as Kingsway earlier, the PM said its spirit, as well as architecture, symbolised India’s slavery. With the inauguration of the Central Vista Avenue now both have been changed.

“This is an example of developing our cultural infrastructure,” Modi said and cited the Statue of Unity dedicated to Sardar Patel and the National War Memorial as other such examples. 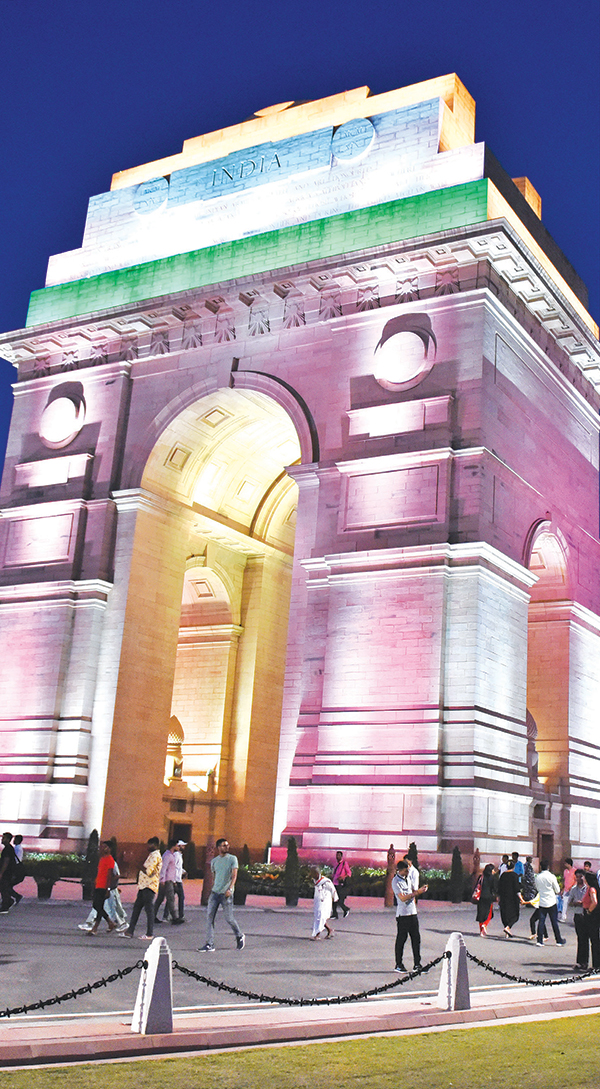 The inauguration of Kartavya Path and installation of Bose’s 28-ft-tall statue at the canopy, where a statue of King George V stood till 1968, are not the first example of the country getting rid of its colonial mind-set. During Prime Minister Modi’s eight years, the Government has renamed Race Course Road as Lok Kalyan Marg and Aurangzeb Road as APJ Abdul Kalam Road, Dalhousie Road to Dara Shikoh Road and Teen Murti Chowk to Teen Murti Haifa Chowk.

The famed canopy of India Gate, where a grand statue of freedom fighter Subhas Chandra Bose has now come up, marked a milestone transition in the history of India as ‘Netaji’ has been accorded a place that was once occupied by an imposing marble statue of British monarch King George V. Significantly, the new statue has been installed at the same place where a ‘hologram statue’ of Netaji was unveiled earlier this year on Parakram Diwas (January 23) to mark his 125th birth anniversary. The canopy, standing on four columns of the Delhi Order devised by Sir Edwin Lutyens, had been lying empty since the statue of the king was removed in 1968.

Before the ‘monarch’ was relegated to the grounds of the Coronation Park in northwest Delhi — the site of the 1911 coronation Durbar, till 1968 – he stood under the canopy watching the India Gate and Kingsway, the ceremonial boulevard that ran up to the Raisina Hill on which Rashtrapati Bhawan (earlier Viceroy’s House) was built. The statue of George V was unveiled in 1939 by the then Viceroy Lord Linlithgow as a memorial to the British monarch under whose reign ‘New Delhi’ was built as the British Raj’s capital.

A step towards modernising the maritime security infrastructure

Time to reimagine the Maximum City