PM Modi focuses on big picture, dwells on ideas for the future

by Blitzindiamedia
in Rising india
0

A mid nationwide celebration of Azadi Ka Amrit Mahotsav, Prime Minister Narendra Modi’s Independence Day address to the nation this year marked a paradigm shift from the past.

Devoid of announcements on any social sector schemes, PM Modi focused on the big picture and dwelt on the ideas for the future, urging people to embrace self-reliance in spirit and action. With people participating in ‘Har Ghar Tiranga’ campaign, and elections due in some states before 2024, he sought their support and blessings to fight bhrashtachar, pariwaarwad and bhaibhatijawad. 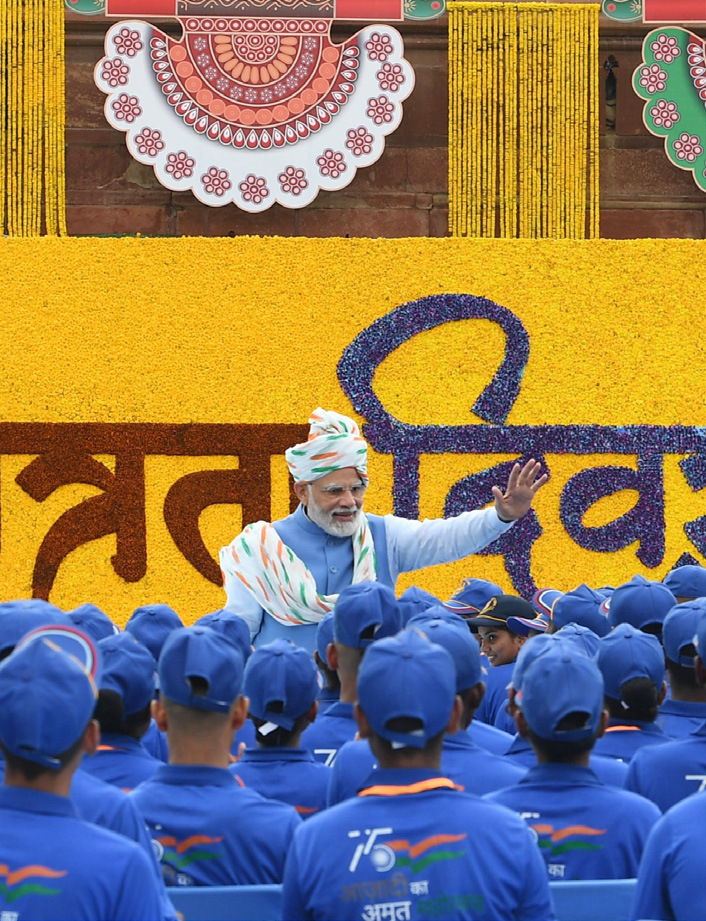 PM Modi used his political capital to push the message of respecting women who are part of an ever-growing and decisive — and, at times, independent of the menfolk — constituency of voters. Setting a broad direction for the next quarter of a century, he elaborated on the ‘Panch Pran’ – the first being the goal of a developed India by 2047, which seeks to stoke the ambition of an aspirational society.

At one point, he said those who are 25 years now will be 50 when the country turns 100. He knows his constituency – the youth. India’s median age this year is 28 years. The second commitment is to “remove any trace of colonial mindset” — a euphemism of sorts for his push towards the dictum “Indians don’t need any certificates from the world”. This comes from recent experiences where statements are sometimes made by foreign governments, UN bodies, international surveys, and even foreign rating agencies.

The third is “to take pride in our roots” — again a reminder to people about their rich civilisation and an attempt to reawaken that consciousness. The BJP has been seeking to push this for the last eight years — from yoga to Ayurveda.

The fourth commitment the PM underlined was “unity” – amongst all workers, especially women while the fifth related to the duty and responsibility of citizens. He framed this argument by saying that while the Government will try to bring in facilities and amenities for the people of the country, it is the duty of the people and the citizenry to save and conserve resources that are finite.

By referring to corruption, he clearly targeted the Congress and the Trinamool Congress (TMC). He said while some people did not have money, some were finding it difficult to hide their money. His remarks came at a time when the Enforcement Directorate recently recovered a huge stash of cash from a senior Trinamool Congress leader’s aide in Kolkata.

Countering the suggestion that the Government was using the Central agencies to target Opposition leaders, PM Modi said his fight against corruption is entering a “decisive period” and warned that even big-wigs will not be spared. “The corrupt are eating away the country like termites. I have to fight against it, intensify the fight and have to take it to a decisive point. So, my 130 crore countrymen, please bless me and support me,” he said.

The second major challenge confronting the nation, according to Modi was pariwaarwad (dynasty politics) and bhai-bhatijawad (nepotism). This is not a new theme and the PM has talked about it many times in the past, most recently at the three-day BJP national executive meeting. But it assumes significance now as the BJP is gearing up for a poll battle in Telangana, where the KCR-led TRS is accused of being dynastic in its style of functioning.

While the BJP has to engage in a bitter electoral fight with the Samajwadi Party in UP and the RJD in Bihar, where it recently lost its government and ally to Lalu Prasad-led RJD, in the South the party has to face parties like DMK, YSRCP and TRS – all accused of being run by families – to expand its footprints. All this points to the larger political campaign plan for 2024 on these twin planks of “corruption” and “nepotism” — something that he is familiar with and has used in the run-up to earlier electoral battles.

Purpose and The Academy