CSR: An Indian innovation worth emulating

Need for more, and in better ways

Philanthropy has been part of the Indian tradition since ancient times. Contributions in the form of money, material and effort from the privileged to the dispossessed are part of our culture. Carrying this tradition further, the Government made Corporate Social Responsibility (CSR) mandatory through the 2013 Companies Act.

Under the Act, companies having a net worth of at least Rs 500 crore or a minimum turnover of Rs 1,000 crore or a net profit of Rs 5 crore or more during the immediately preceding financial year, have to spend at least 2 per cent of their three-year annual average net profit towards CSR activities in a particular financial year.

This was an innovative policy step. In fact India is the only country in the world where CSR is mandated by law. On the one side, it has helped companies to formally take up social initiatives and become socially responsible, on the other it has created a great way for nonprofits to diversify their income and reach new donors. The results are there to be seen. Indian companies have spent over Rs. 1 lakh crore under CSR activities since the introduction of the Act.

Many large corporations have brought a seachange in the lives of people of India at various levels. Reliance, Tata Group, Wipro and Infosys are among the leaders in CSR spending

It has been seen that companies engage in social initiatives through models such as:

CSR Leaders Many large corporations have brought a sea-change in the lives of people of India at various levels. Reliance, Tata Group, Wipro and Infosys are among the leaders in CSR spending.

If we talk of CSR activity in FY22, Reliance Industries spent more than Rs. 1,184 crore on CSR during the year. It distributed over Rs 8.5-crore free meals to frontline workers and vulnerable communities during the pandemic. Reliance produced 1,000 tonnes of oxygen every day during the second wave and provided it ‘free’ to states, thus coming to the aid of over 1 lakh patients. It set up a 2,000-bed hospital for Covid care. Under its rural initiative, it created 121 lakh cubic meters of water-harvesting capacity. It also helped 10,896 rural households meet nutritional needs and trained 22,000 members of self-help groups.

Godrej Industries has always been on the forefront of CSR activities in India. During the past decade, the Group has trained and supported over half a million underprivileged people to improve their income through better jobs, improved farm practices, or building their businesses. The Group has also enabled 3.5 million people to protect themselves against vectorborne diseases.

Among the other laudable initiatives is one by Tech Mahindra Foundation, the CSR arm of Tech Mahindra Limited. It is working extensively on the vision of ‘Empowerment through Education’ with three key focus areas – education, employability and disability – to empower all to rise. It is bringing in social change through 150+ projects in 11 locations across India.

During the pandemic, Vodafone Idea Foundation, the CSR arm of Vi, rewarded 200 teachers and 2,500 students with scholarships to bridge the social and fiscal divide, thereby allowing them to invest in technology tools and their education. Vi is continuing this initiative and believes it will go a long way in spreading the light of education and further enhance employability of people, thereby reducing poverty in the country.

CSR investments by companies have impacted three sectors the most – education, healthcare and rural development. In fact these three accounted for 59.9 per cent of total spending on CSR in 2020-21.

Education’s share stood at 24.8 per cent while that of healthcare at 26.9 per cent in 2020-21. There have been asymmetries among the states in terms of the investments made. In FY21, as many as 1,619 companies spent 8,000 CSR on projects, much less than from the previous year when 22,531 companies showed CSR spends, perhaps owing to the pandemic. Ninety-four per cent of the total expenditure was done by 1,599 non-public sector companies.

Many countries are now looking at this model where large and medium enterprises develop a relationship with the needy or those at the bottom of the pyramid. Nonetheless, the Government believes more can still be done and in better ways. It felt the need to measure the scope and has mandated a new disclosure framework wherein companies shall have to file a detailed report highlighting expenditure on ongoing projects and new projects, creation of capital assets and details of the impact assessment among other things.

Several of its students have gone on to represent India in the Olympics. Tata Steel is running training centres of 19 different sports disciplines in the JRD Sports Complex in Jamshedpur, training close to 2,500 kids every year.

Credit Suisse has started a sports facility together with Jai Vakeel Foundation with a mission to improve the lives of intellectually disabled children.

The Reliance Foundation Young Champs is a unique, full scholarship-based, residential football and education programme for providing top football talent in the country between 12 to 16 years of age. It has given out 79 scholarships so far.

Hindustan Zinc has set up ZF schools that use football as a tool for social development.

At the heart of this initiative is a residential academy with worldclass facilities at Zawar and the country’s first-ever ‘technologyhinged football training’ centre. The academy is currently training 40 children. 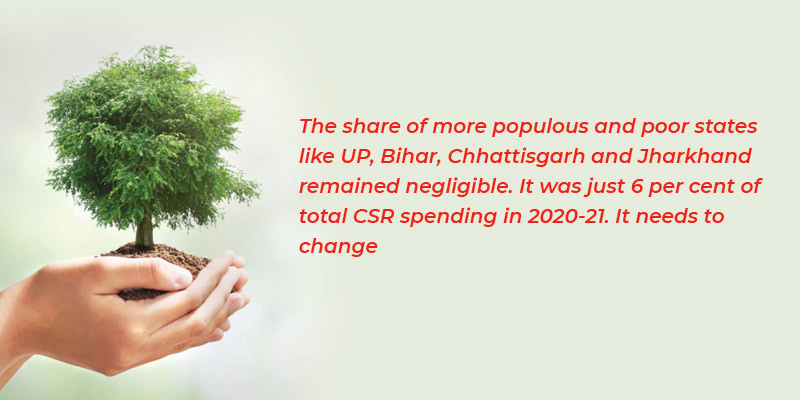 A caring PM is the inspiration