The Union Minister for Defence, Shri Rajnath Singh calling on the President of Vietnam, Mr. Nguyen Xuan Phuc, in Hanoi

During Singh’s visit, India and Vietnam signed two key agreements. The first agreement, ‘Joint Vision Statement on India-Vietnam Defence Partnership towards 2030’, casts a long-term perspective on the mutual ties. The second is an MoU focused on mutual logistics support to enable the two countries to use each other’s military bases to repair and replenish supplies. This agreement is the first such major agreement which Vietnam has signed with any country. 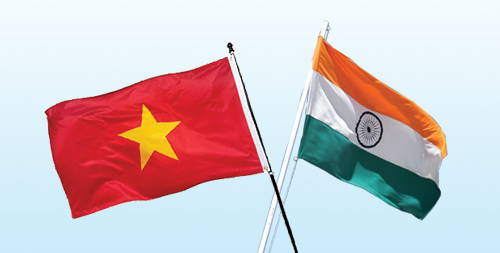 Besides, the two countries also agreed to expedite the extension of a $500-million Line of Credit (LoC) to Hanoi. This LoC, meant for Vietnam’s purchase of Indian arms, was initially announced in September 2016 during Prime Minister Narendra Modi’s visit to Vietnam when the relationship was upgraded to the ‘Comprehensive Strategic Partnership’.

Vietnam used an earlier $100 million Indian defence LoC (offered almost a decade ago in 2013) to purchase 12 offshore high-speed patrol boats for its Navy. India handed over these boats during Minister Singh’s visit.

The Vietnamese side is envisioning local production of the Akash-NG variant (with a range of 70-80 km.) and therefore, has requested the transfer of technology and joint production of the system. However, any materialisation of this deal is some time away as the missile system is still undergoing testing. More likely is the purchase of Brahmos missiles, co-developed by India and Russia.

After bagging its first export order for the missile from the Philippines earlier this year, India is keen to maintain the momentum by aggressively pitching the missile system to Hanoi. This export push serves the dual purpose of boosting India’s defence industry and arming a key Southeast Asian nation that keeps China on edge.

Pertinently, the L&T shipyard had built the offshore boats that India delivered under the $100 million LoC. Opportunities such as these open up prospects for the private sector to be part of India’s growing defence exports.

Notwithstanding the pro-China orientation of the current political leadership, a key driver of Vietnam’s military build-up is the security rivalry with China. Beijing’s steppedup aggression to press its territorial claims in the South China Sea has been a significant irritant for Hanoi.

Clashes between the two have increased since May 2014, when Vietnamese naval ships and fishing boats sparred with the Chinese vessels in the disputed Paracel Islands, where China had installed an oil rig. In one incident, a Vietnamese fishing boat sank near the rig after colliding with a Chinese vessel.

Vietnam has traditionally relied on Russia for its weapons. However, given its renewed proximity with the US and the US sanctions against the Russian defence industry, Hanoi has sought to diversify its recent arms purchases.

Since the South China Sea clashes, Vietnam has boosted its defence spending, averaging US $4.8 billion between 2014 and 2018. But, compared to the threat posed by China and its military requirements, this spending is inadequate. Therefore, Hanoi is looking for more affordable defence suppliers with this moderate defence spending.

India can potentially be one such source. The Indian military has the advantage of operating similar platforms to Vietnam’s. It has leveraged this by assisting Hanoi in training and capacity building in Kilo-class submarine operations and Sukhoi-30 fighter jet training.

The unrelenting Chinese hostility in the region will ensure that India and Vietnam will continue on the path of cooperation. Moreover, the positive trajectory of both countries vis-à-vis the security ties with the US is another point of convergence. 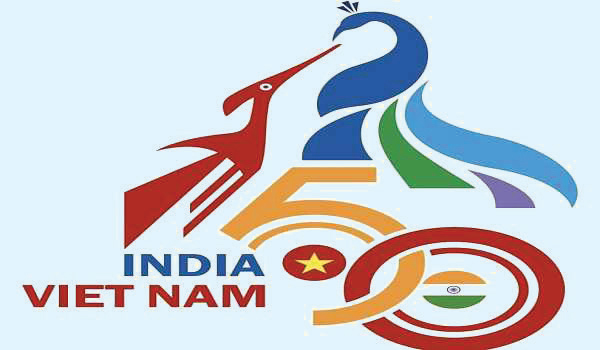 The logo has been selected jointly by India and Vietnam through a contest open to the nationals of both countries.

The image represents a longstanding friendship between India and Vietnam symbolically through a peacock and a crane, the birds of national importance in the two countries respectively, as per the ministry statement.

It also includes the numeral 50 to denote the 50 years of diplomatic relations and the national flags of India and Vietnam at its Centre, it added.

Meanwhile, India and Vietnam have a broad convergence of interest as the emerging economies and important countries with respect to creating alternative supply chains in Asia after global disillusionment with the Chinacentric supply chain during the Covid-19 pandemic.

Besides, the two countries are equally concerned about the aggressive and expansionist policies of China in the IndoPacific region. The two countries also share a Comprehensive Strategic Partnership since 2016 and defence cooperation is a key pillar of this.

How other democracies regulate social media

A victim of China’s debt-trap diplomacy