Change is the only constant in life,” goes the saying attributed to the Greek philosopher Heraclitus. He was an ancient theorist who created doctrines about the constant change and flux of life. But if change is so constant and prevalent, then why do we resist it? Why does it feel so hard to adjust to it?

It is because we are creatures of habit. We feel comfortable and secure in doing things the way we have always done them. A departure from the past– like a change of job or a move to a new town–makes us uncomfortable, even if we know it’s a change for the better.

Not so for technology guru Sree Sreenivasan. His life has been about embracing change, particularly if it relates to technology. By embracing both and tying his career to a higher purpose of serving others, he has excelled. 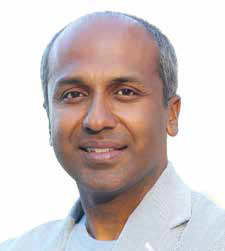 Born in Tokyo as the son of an Indian diplomat, he moved throughout his life, always making new friends, and experiencing constant change as his family regularly relocated. I first knew him as Dean of Students at Columbia University’s School of Journalism and local television station WABC7’s ‘Tech Guru’, where he regularly guided viewers through the Internet revolution.

He would advance to become Chief Digital Officer of Columbia University, the Metropolitan Museum of Art, and the City of New York. By 2015, Fast Company named him one of the 100 most creative people in business and in 2010, he was named one of the 35 most influential people in social media by the Poynter Institute.

Today Sreenivasan is the CEO of Digimentors, a digital, social, and virtual and hybrid events consulting company working around the world, and the inaugural Marshall Loeb visiting Professor of Digital Innovation at Stony Brook School of Communication and Journalism. Sreenivasan joined me on The Caring Economy in January to discuss his career journey and lessons learned about change. Three points struck me in particular:

He would grow up in seven different countries which meant a lot of adjusting. From Soviet Union in the 1970s where he was a “full blown communist” and Lenin was God, to the Upper Eastside of Manhattan where another Lennon, Beatle “Saint John Lennon was God.” By age12, Sreenivasan told his parents he was going to be a journalist. “They started crying immediately because Indian parents, as you know, want their child to be a doctor, an engineer, a lawyer, or anything but a journalist.”

Embrace technology – During high school in Fiji, Sreenivasan gained early insight into how technology was affecting the world. He notes: “My father was the High Commissioner when there was the first of a series of coups because they had the fax machine, my dad could communicate with India.” All telephone lines had been cut, but not lines for the fax machine. “It really helped through that very complicated and dangerous political, diplomatic negotiations,” he observes.

Be human and be vigilant– Sreenivasan has a theory about the future and reconciling our digital and analogue selves. He states: “With my theory of the 2 footprints I say that . .

. if your digital footprint doesn’t match your physical footprint, you’re leaving opportunities, money, other things on the table, and so my life mission is to help non-profits, for profits, individual companies, etc. make those two things a little more close.”

He concludes that, “If you’ve been doing the good work through important work on physical ‘footprint’, then for a digital ‘footprint’ it’s easy to address. But the reverse is much harder. There are people who you know who are really good at social but have no ‘there’ there, and that’s what we want to avoid.”

Sreenivasan exemplifies how purpose-driven lives and careers evolve together. With technology as such an integral part of our home and professional lives, we would all be well served to heed his advice on embracing both change and technology, online and offline. Just put one ‘analogue’ foot in front of the ‘digital’ foot, and soon we are walking to an even better place.