UK Prime Minister Boris Johnson is set to visit India later this month as both countries seek to strengthen ties. The visit comes amid London’s Indo-Pacific tilt and both sides are expected to hold talks on a free trade pact.

After a personal meeting with Indian Prime Minister Narendra Modi in November last year on the sidelines of the Glasgow climate summit, Johnson spoke to Modi last month and agreed to build a strong relationship between the two countries on trade, security, and business in the coming days. “Today @narendramodi and I spoke about the grave situation in Ukraine and agreed its sovereignty must be respected. The UK-India relationship continues to go from strength to strength, and we’ll build on our trade, security & business ties in the coming weeks and months,” tweeted Johnson post-the conversation.

According to a PMO statement, PM Modi expressed satisfaction at the positive momentum in the ongoing negotiations on the bilateral Free Trade Agreement. He also appreciated the progress in implementing the ‘India-UK Roadmap 2030’ adopted during the virtual summit between both leaders last year.

During their virtual summit in May 2021, the two leaders had agreed on a framework for UK-India relations across the health, climate, trade, education, science and technology, and defense. They had also agreed to elevate the status of the relationship to a ‘Comprehensive Strategic Partnership’. With trade pact talks underway, one of the key outcomes of the virtual summit was to double trade by 2030. Trade between the UK and India is worth around £23 billion a year.

Just last month, UK Foreign Secretary Liz Truss was in New Delhi as part of a “wider diplomatic push” amid the Russian invasion of Ukraine. “Relation between the United Kingdom and India is vital over the coming decades,” she said. This was her second visit to the country as Foreign Secretary, following one in October, and her third as Secretary of State in 13 months.

Since January, India and the UK have completed two rounds of trade talks. After finalising bilateral FTAs with the UAE and Australia, New Delhi has also started negotiations with a few other countries, including Canada. As part of its Indo-Pacific tilt post-Brexit strategy, the United Kingdom will join India’s Indo-Pacific Oceans Initiative and become a lead partner on maritime security issues, coordinating work with key Southeast Asian partners.

The breadth and depth of India-UK ties are underpinned by the living bridge between our people – with more Indian companies in the UK than in the rest of Europe combined and a vibrant Indian diaspora of 1.6 million sharing deep connections between our countries. 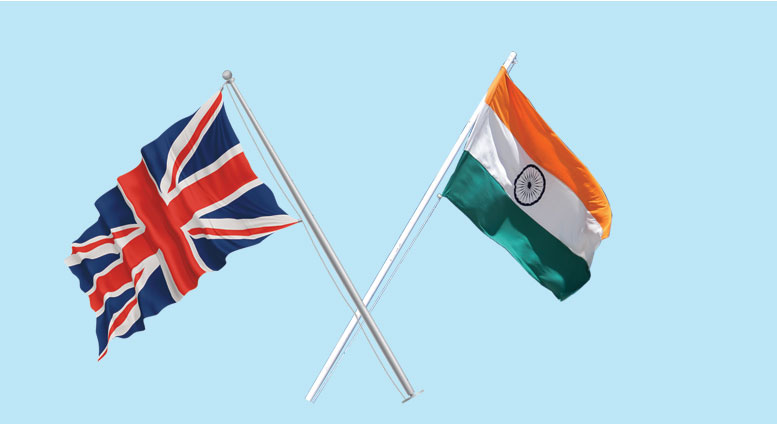 The breadth and depth of India-UK ties are underpinned by the living bridge between our people – with more Indian companies in the UK than in the rest of Europe combined and a vibrant Indian diaspora of 1.6 million sharing deep connections between our countries

Johsnon’s overdue visit to India this month—it had to be canceled twice due to the Covid-19 pandemic— assumes a special significance in the backdrop of the impact of the raging conflict in Ukraine and its possible impact on the Indo-specific region. For both Britain and India, it is an opportunity for forging a comprehensive strategic vision in a profoundly changed world where pre-pandemic truisms and certitudes have been rendered meaningless.

The possible blueprint for a future whose geo-political, geo-economic and geo-strategic landscape is not dominated by the Middle Kingdom is obvious to all, even to those in Europe discomfited by Beijing’s seemingly inexorable continued rise and yet who are unwilling to stand up and be counted.

Britain and India must define their role in refashioning the global landscape in which a new continent, Eurasia, and a new water body, the Indo-Pacific, dominate. India has made its move; Britain, too, must.

Historically, the UK has been present in the Indo-Pacific region, and Britain has a sense of the nations there. Colonialism waned, but Britain’s partnerships waxed—some of its most important partnerships are in these waters. In all this, the centrality of India is beyond debate or doubt, which only serves to underscore that Britain should naturally invest in and with India.

The rise of the European Union (EU) witnessed continental Europe’s gradual disengagement from the non-Atlantic world. Pax Britannica, once global, ceded place to a trans-Atlantic compact in which Britain was one of many voices, often drowned out by the voices of others. Brexit provides the UK with an opportunity to retain that battered sovereignty and regain the power— within and beyond Europe—it had surrendered between 1946 and 2016.The Commonwealth, a unique association of 54 equal member states, and 2.4 billion people spanning six continents acquires a renewed salience in the UK’s role in the changing geopolitical scenario. The changing face of the European politics post-Ukraine conflict has made it all the more relevant.The association accounts for a third of the World Trade Organisation, a quarter of the G20, and a fifth of all global trade. India is a founding member of the modern Commonwealth and home to nearly 60% of the Commonwealth citizens. As a leading member, India provides impressive support to Commonwealth members.

Reinventing it for both Britain and India would mean starting a new purpose and intent in a profoundly changed world.

Some of the UK’s most important partnerships are in the Indo-Pacific region. It’s time for the UK to leverage those partnerships and demonstrate that it did not meander its way out of the EU maze directionless, but did so with a firm purpose.

One possibility would be to create a group of eight within the Commonwealth comprising Britain, India, Bangladesh, Kenya, South Africa, Australia, Canada, and Singapore. These eight countries have an influence on and are implicated in the developments in the Indo-Pacific.

Crucial for the SDG and Climate agenda, these countries can put together a vision for growth, sustainability, and technology for our future and give teeth to a grouping that has been adrift and make it contemporaneous.

Dawn of a New India

Fall of the last wall