With the resignation of British Prime Minister Boris Johnson on July 7, the race has begun for his successor and, interestingly enough, the field is packed with persons of Indian and South Asian origin.

Among the favourites to succeed Johnson is Rishi Sunak, former Chancellor of the Exchequer. Son-inlaw of Infosys founder NR Narayana Murthy, Sunak became a Member of Parliament for the first time in 2015 from Richmond. Within five years, he was catapulted to the Cabinet position.

The former analyst with investment bank Goldman Sachs became popular during the Covid-19 pandemic by framing a package worth tens of billions of pounds to help businesses and workers.

Even before Johnson delivered his resignation speech, one Indianorigin candidate was already lined up to compete for the top job. Goanorigin Suella Braverman, currently the Attorney General in the UK Cabinet, is among the early Tory members of Parliament who formally declared her leadership bid. The 42-year-old barrister and the Government’s seniormost legal official is likely to command some support within the pro-Brexit wing of her party. 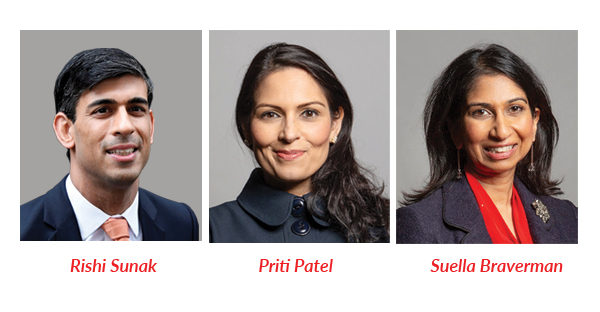 Home Secretary Priti Patel is also being seen as a possible contender for the top job. Patel, 50, the daughter of Ugandan-Indian parents who came to the UK in the 1960s, was among Johnson’s greatest supporters but switched sides later. After several years working as a lobbyist for the tobacco and alcohol industries, she was elected to Parliament in 2010.

Pakistani-origin Sajid Javid is another contender. Javid, 52, was among the top four candidates when he made a bid for the Conservative Party’s leadership in 2019. He subsequently dropped out of that race and backed Johnson.