“It is the best of times, it is the worst of times,” for climate change.

Consider the worst-of-times scenario for India. Count the zeroes: $ 159,000,000,000 (Nine zeroes: US $ 159 billion) That is 5.4 per cent of India’s GDP in 2021, the burden we paid for increasing heat caused by carbon emissions. Climate Transparency (CT) report of 2022 says India’s loss is the most devastating of all G20 countries. India lost US $ 159 billion in 2021 due to increasing heat caused only by carbon emissions.

India is the worst affected among all G20 economies. Compared to India’s alarmingly high losses, Indonesia lost 1.6 per cent of its GDP, Saudi Arabia 1 per cent, China 0.9 per cent and Brazil 0.7 per cent (see graph). According to the CT report, the carbon emission-induced rise in temperatures led to labour capacity reduction caused by severe heat.

Consider the best-of-times: India gets 70 per cent of its electricity from coal-fired thermal power plants. Coal burning is one of the biggest sources of carbon dioxide emissions.

India has 39 new coal-fired power plants under construction. China and India have the largest coal reserves in the world. In the 2021 Glasgow climate conference, The Economist described India in deplorable terms: “the skunk at the garden party, blocking efforts to phase out the fuel most responsible for global warming.” 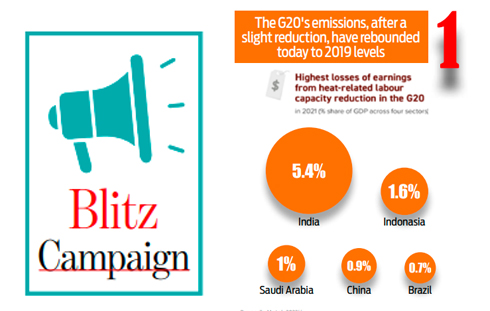 India: Green energy powerhouse Later eating its own words, the Economist admitted “India is a green energy powerhouse.” “This soot-smeared intransigence, however, distracts from a dramatic countervailing trend. While his underlings defended coal, Narendra Modi, made a series of pledges in Glasgow that, if kept, will make his country a green-energy powerhouse… The most eye-catching was the promise that India would achieve “net-zero” emissions of greenhouse gases (GHG) by 2070,” says the Economist. Climate change affects geopolitics, economies and migration. It destroys cities, devastates villages, lowering life expectancy, stunting growth. We in Blitz India have made climate change a campaign issue.

Technology to shape future of democracies

A Crusader of Development

The brain behind India’s ‘offensive defence’