In our country, while the role of the judiciary is that of the guardian of the Constitution, the legislature represents the aspirations of the citizens. I believe that this confluence and balance of these two branches of the Constitution will prepare the roadmap for an effective and time-bound judicial system in the country.” said Prime Minister Narendra Modi at the joint conference of Chief Ministers of States and Chief Justices of High Courts.

In fact, 75 years of independence have clarified the roles and responsibilities of both the judiciary and the executive. He said this relationship had evolved continuously to give direction to the country wherever it was necessary, calling the conference a vibrant manifestation of the beauty of the Constitution.

On this occasion, the Prime Minister said, “In 2047, when the country will complete 100 years of its independence, what kind of judicial system would we like to see in the country? How do we make our judicial system so capable that it can fulfill the aspirations of India of 2047? These questions should be our priority today. Our vision should be of such a judicial system where there is accessible justice, speedy justice, and justice for all”.

The Prime Minister emphasized that the Government is working hard to reduce delays in justice delivery, and efforts are increasing judicial strength and improving judicial infrastructure.

The Prime Minister reiterated his vision of the use of technology in governance in the context of judicial work. He said that the Government of India considers the possibilities of technology in the judicial system as an essential part of the Digital India mission. He appealed to the Chief Ministers and Chief Justices of High Courts to take this forward. The Prime Minister said that subjects like blockchains, electronic discovery, cybersecurity, robotics, AI, and bioethics are being taught in law universities in many countries. It is our responsibility that legal education should also be according in our country to these international standards.

The Prime Minister said it is essential to promote local languages in the courts so that people of the country feel connected with the judicial process and their faith in the same increases. He pointed out the complexities and obsolescence of certain laws and informed that in 2015, the Government identified 1,800 laws that had become irrelevant, and 1,450 laws have already been repealed. He pointed out that the states have removed only 75 such laws. The Prime Minister urged all the Chief Ministers that for the rights of the citizens of their condition and their ease of living, speedy steps should be taken in this direction.

He clarified that judicial reform is not merely a policy matter. Human sensitivities are involved, and they should be kept at the center of all the deliberations. Today, about 3.5 lakh prisoners in the country are under trial and are in jail. Most of these people are from poor or ordinary families. He said there is a committee headed by the District Judge in every district so that these cases can be reviewed, and wherever possible, such prisoners may be released on bail. The PM appealed to all Chief Ministers and Chief Justices of High Courts to give priority to these matters on the basis of humanitarian sensibility and law. 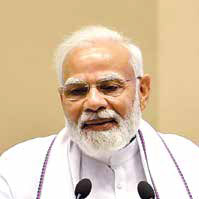 “In 2047, when the country will complete 100 years of its independence, what kind of judicial system would we like to see in the country? How do we make our judicial system so capable that it can fulfill the aspirations of India of 2047? Prime Minister Narendra Modi 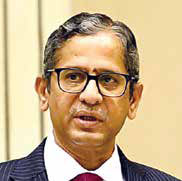 “Constitution provides separation of power among three organs, and the harmonious function between three organs strengthens democracy. While discharging our duty, we should be mindful of Lakshman Rekha” NV Ramana, Chief Justice of India

The Prime Minister said mediation is also an essential tool for settling pending cases in the courts, especially at the local level. There is a thousand-year-old tradition of settlement of disputes through mediation in our society. In their way, mutual consent and participation are distinctly human concepts of justice. The Government has introduced the Mediation Bill in Parliament as umbrella legislation with this thinking. “With our rich legal expertise, we can become a global leader in the solution field by mediation. We can present a model to the whole world”, the PM said.

On this occasion, Chief Justice of India NV Ramana said the Constitution provides separation of power among the three organs of the state. While discharging duty, one should be mindful of ‘Lakshman Rekha’. The CJI also remarked that deliberate inaction by governments despite judicial pronouncements is not suitable for the health of democracy.

“Constitution provides separation of power among three organs, and the harmonious function between three organs strengthens democracy. While discharging our duty, we should be mindful of Lakshman Rekha,” he said. The CJI said the aim and object of the conference are to discuss and identify the problems affecting the administration of justice. He expressed concern over the increasing trend of frivolous litigations.

“The rising number of frivolous litigations is an area of concern. For example, the well-meaning concept of public interest litigation is at times turning into personal interest litigation. No doubt, PIL has served a lot of public interest. However, it is sometimes being misused to stall projects or pressurize public authorities,” he said. “These days, PIL has become a tool for those who want to settle political scores or corporate rivalry. Realizing the potential for misuse, courts are now highly cautious in entertaining the same,” said CJI Ramana.