MODI MODE OF DELIVERY: ENSURING DIRECT BENEFIT TO THE LAST MAN IN LINE

In a democracy, people are final arbiters of the performance of the Government. And they do it through elections at constitutionally prescribed intervals, leaving the task of governmental oversight to the organs of the state – the legislature, the executive and the judiciary. .

For the first time in India’s 72 yearold history, Prime Minister Narendra Modi has departed from this convention, by maintaining a constant dialogue with the people throughout the eight years of his Government. He has sought their feedback on Government’s work, encouraged them to articulate their complaints, point out shortcomings, and solicited their suggestions for mid-way course correction.

The Garib Kalyan Sammelan, held in Shimla on May 31, where PM Modi interacted with beneficiaries of a wide umbrella of welfare schemes launched by his Government, was a historic milestone that epitomised this component of the Modi Model of the Welfare State.

Modi virtually interacted with beneficiaries from Ladakh, Karnataka, Tripura, Gujarat and Bihar and spoke to a woman from Sirmaur, who was present in the mammoth rally he addressed there. The PM asked the beneficiaries how these schemes had transformed their lives and whether they faced any difficulty in availing the benefits.

In a move that has come to characterise his style of working, PM Modi released the 11th instalment of his flagship PM Kisan Scheme through direct transfer of Rs. 2,000 each to the accounts of over 10 crore beneficiaries. 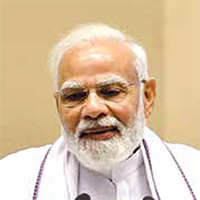 “Earlier, 85 paise in every rupee would go missing due to corruption. Now, the entire money meant for beneficiaries is transferred directly into their accounts, eliminating any scope for corruption”
Prime Minsiter Narendra Modi

Speaking on the occasion, he pointed to corruption and nepotism rampant in welfare schemes during the Congress-led UPA regime. “Earlier, 85 paise in every rupee would go missing due to corruption. Now, the entire money meant for beneficiaries is transferred directly into their accounts, eliminating any scope for corruption.”

Modi told the rally that his Government had succeeded in plugging Rs 2.25 lakh crore worth of “leakage”, which used to go into the hands of middlemen. “More than nine crore ineligible names have been deleted from the list of beneficiaries of various schemes,” he remarked.

He said he didn’t consider himself the PM, but part of a family comprising 130 crore members. “When I sign a file, I act as the PM. The moment the file is done, I become a member of the 130 crore strong Indian family. I am their ‘pradhan sewak’ (principal attendant),” he said.

While Modi addressed the mega event at the Himachal Pradesh state capital, the freewheeling interaction was organised across the country in state capitals, district headquarters and Krishi Vigyan Kendras.

According to the Prime Minister’s Office, the mammoth exercise was aimed at getting free and frank feedback from the public, understanding the impact of welfare schemes in people’s lives and exploring convergence and saturation with regard to different Government programmes.”

Welfarism under the Narendra Modi Government is driven by the BJP’s consistent commitment to its foundational value of Antyodaya (no one is left behind) and was necessitated by the dismal state of public service delivery when the party assumed office in 2014.

Inclusive development, which reaches the last person in the line, has been the focus of the Modi Government during its last eight years in power.

At the core of this strategy is to create a bucket of welfare schemes, each addressing a basic need: a subsidised house, a tap water connection, a toilet, a gas connection, cheap ration, employment guarantee and cash support for agriculture.

The implementation of these flagship schemes, such as the PM Awas Yojana, PM Ujjwala Yojana, Jan Dhan Accounts, PM Kisan Nidhi Yojana, Mudra Loans, PM Jeevan Suraksha Yojana, is closely monitored by the Prime Minister’s Office (PMO). This marks a change in the approach to welfare. Over a decade, India has been legislating on various

WFP scales up its support for millions who ‘cannot wait’