United Nations Secretary-General Antonio Guterres’ appeal to Russian President Vladimir Putin a day before the attack on Ukraine is symptomatic of the failure and uselessness of the world body which was born to prevent wars.

President Putin, in the name of humanity, brings your troops back to Russia,” Guterres said after the emergency meeting of the United Nations Security Council convened as a desperate measure to scale down the tensions between Russia and Ukraine.

It was the cry of a feeble organization that has failed to do what it was supposed to do. Born in 1945 after the Second World War, in which around 80 million people died, the UN made a passionate appeal in its Charter: “WE THE PEOPLES OF THE UNITED NATIONS DETERMINED to save succeeding generations from the scourge of war, which twice in our lifetime has brought untold sorrow to mankind, and to reaffirm faith in fundamental human rights, in the dignity and worth of the human person, in the equal rights of men and women and nations large and small, and to establish conditions under which justice and respect for the obligations arising from treaties and other sources of international law can be maintained, and to promote social progress and better standards of life in larger freedom.”

Accordingly, Article 1 of the UN Charter describes the first purpose as: “To maintain international peace and security, and to that end: to take effective collective measures for the prevention and removal of threats to the peace, and the suppression of acts of aggression or other breaches of the peace, and to bring about by peaceful means, and in conformity with the principles of justice and international law, adjustment or settlement of international disputes or situations which might lead to a breach of the peace.”

Evidently, “effective collective measures” from the UN are missing. This is the reason war is waging in Eastern Europe, the consequences of which would be, as Guterres said, devastating for Ukraine and farreaching for the global economy.

The UN’s failure has a lot to do with its very structure. It is a pity that India, the world’s largest democracy, is not even a permanent member of the UN Security Council.

His remarks came after Putin announced a military invasion of Ukraine. “I have decided on a military operation,” Putin said in a televised address.

His pretext was that the rebel leaders in eastern Ukraine had sought urgent Russian help against what they alleged as aggressive Ukrainian armed forces.

Anticipating Russian aggression, Ukraine had announced a state of emergency, mobilizing the military reserves. “The people of Ukraine and the Government of Ukraine want peace. But if the nation comes under an attack, we will fight back,” Ukrainian President Volodymyr Zelensky said in his address to the nation.

The small eastern European nation is facing the brunt of the Russian war machine, one of the mightiest in the world, because of several reasons, the most important of which is that the UN has failed to live up to the expectations.

The UN’s failure has a lot to do with its very structure. It is a pity that India, the world’s largest democracy, is not even a permanent member of the UN Security Council, which is the global body’s most important arm responsible for the maintenance of international peace and security.

On the one hand, the UN Charter talks about “fundamental human rights, in the dignity and worth of the human person… social progress and better standards of life in larger freedom”; on the other hand, India, whose Constitution and polity resonate with these grand ideas is treated shoddily.

India has been demanding a permanent seat in the UNSC. Addressing the United Nations’ 75th General Assembly virtually in 2020, Prime Minister Narendra Modi, questioned the UN’s hesitancy in making India a permanent member and expressed anguish over the denial: “The trust India has in the UN is unparalleled. But Indians are waiting for reforms in the UN. They are concerned if the reform process will reach the logical end? How long will India be kept away from decision-making in the UN? How long will the country have to wait for the changes happening in the real world? India aspires to be in an expanded role in the UN.”

Yet, their feelings and appreciations are to translate into action: India still awaits to be a UNSC permanent member. Consequently, the UN stays a poorly representative organization.

The birth of the UN

As World War II was about to end in 1945, nations were in ruins, and the world wanted peace. Representatives of 50 countries gathered at the United Nations Conference on International Organisation in San Francisco, California, from April 25 to June 26, 1945. 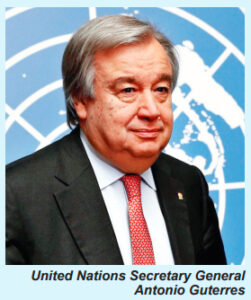 For the next two months, they proceeded to draft and then sign the UN Charter, which created a new international organization, the United Nations, which, it was hoped, would prevent another world war like the one they had just lived through.

Four months after the San Francisco Conference ended, the United Nations officially began, on October 24, 1945, when it came into existence after its Charter had been ratified by China, France, the Soviet Union, the United Kingdom, the United States, and by a majority of other signatories.

A global salaam for traditional medicine