India and Uzbekistan have relations that go back in history. India was one of the first countries to recognise the state sovereignty of Uzbekistan after the latter’s independence. The protocol for the establishment of diplomatic relations between the two countries was signed in Tashkent on March 18, 1992.

“Over the past three decades, our cooperation has achieved many successes and now, at this crucial juncture, we need an aspirational vision for the years to come, a vision that can fulfil the aspirations of our young people,” said Prime Minister Modi at the first Central Asian Summit hosted by India on January 27 this year.

The summit was the sequel to a significant intensification of bilateral relations between India and Uzbekistan in recent years based on shared interests ranging from counter-terrorism to trade promotion. This paradigm shift in bilateral ties is mainly due to the high-level visits of leaders of the two countries and the Modi Government’s outreach to India’s extended neighbourhood.

In recent years, there has been a paradigm shift in bilateral ties, mainly due to the high-level visits of leaders of the two countries and the Modi Government’s outreach to India’s extended neighbourhood

Within a year after taking over as Prime Minister, Modi visited Uzbekistan in July 2015. During this visit, he discussed the issue of deepening bilateral ties with then Uzbek President Islam Karimov. An agreement on cooperation in the field of tourism; a protocol on cooperation between the Foreign Ministries; and a Programme of Cultural Cooperation for a period of 2015-2017 were signed. PM Modi again visited Tashkent in June 2016 as part of the meeting of the Heads of State of the Shanghai Cooperation Organisation (SCO). At this meeting, he was briefed about the reforms ushered in Uzbekistan by President Shavkat Mirziyoyev. President Mirziyoyev’s visit to India in October 2018 and in January 2019 further cemented the personal bond. 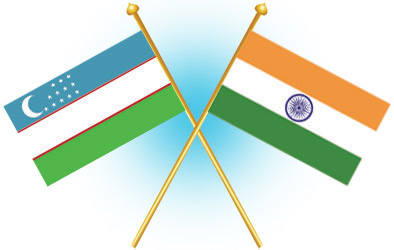 This was followed by a virtual summit between Modi and Mirziyoyev in December 2020. Even at a time when the world was facing a grave economic crisis, New Delhi announced its one-billion-dollar line of credit to five Central Asian republics to widen the connectivity, and energy partnerships and reinvigorate trade and commerce.

A Bilateral Investment Treaty is under negotiation between both countries. With common interests ranging from countering terrorism, transnational organised crime, illegal trafficking, and smuggling, both sides agreed to further intensify cooperation under the bilateral Intergovernmental Agreement concluded in October 2018 on mutual cooperation in combating illicit trafficking in narcotic drugs, psychotropic substances and more.

As part of the growing cooperation in the security sphere, the Agreement on Security Cooperation was signed between India and Uzbekistan in the year 2019.

The increased convergence between the two countries is reciprocal and constructive and can achieve new heights in the coming years including the target of$1 billion in bilateral trade. However, both Tashkent and New Delhi have to take some incremental measures like the early start of negotiations on a Preferential Trade Agreement as both countries face the problem of land connectivity.

Today, pre-eminent challenges for Uzbekistan’s national security emanate from Islamist terrorism and extremism that are often driven, influenced and sustained by internal conflicts in neighbouring Afghanistan and Pakistan. India, too, is the primary target of Islamic fundamentalist groups operating from across the border.

Common concerns about cross border terrorism have propelled both the countries to deepen cooperation on counter-terrorism operations in semi-urban terrain under a United Nations mandate.

The recently concluded joint training exercise between India’s and Uzbekistan’s armies – EXDUSTLIK – was a significant part of this. The joint exercise provided an opportunity for both the contingents to train in counter-terrorism operations in a semi-urban environment. The training focused primarily on sharing tactical level drills and learning best practices from each other.

The military exercise between the armies of the two countries began on March 22 and ended on March 29 this year. The Indian contingent was represented by the Grenadiers Regiment and joined the Uzbekistan Army contingent represented by troops of its North-Western Military District.

After intense military training, the joint exercise concluded with both armies exhibiting their combat power and dominance over the extremist groups. This was the third year of the annual joint exercises related to anti-terror operations. The previous exercise was held in the Ranikhet district of Uttarakhand.

The first such joint exercise was held in Uzbekistan during Indian Defence Minister Rajnath Singh’s visit to that country in 2019 when the two countries signed three MoUs to enhance cooperation in military medicine, military education and training fields. India also extended a $40 million line of credit for the procurement of goods and services from India.

Singh and Uzbek Defence Minister Major General Bakhodir Kurbanov then presided over the inauguration of the first joint military exercise DUSTLIK at the Chirchiq Training area near Tashkent. Uzbekistan is Central Asia’s biggest military power and the country has also inherited important defence industrial assets such as the factory producing Il-76 transport jets, which the Indian Air Force also uses.

Exercise DUSTLIK will enhance the level of defence cooperation between both armies and will act as a catalyst for many such joint programs in future to further consolidate the traditional bond of friendship between India and Uzbekistan.

Space tourism may soon be a reality

A path-breaking book on pauperisation of peasants