With nominations over, the stage is now set for a contest between Jagdeep Dhankar of the BJP-led NDA alliance and the fragmented Opposition candidate Margaret Alva for the post of the Vice-President. The 2022 elections for the VicePresident of India will be held on August 6 and the counting will be done the same day.

Given that only three VicePresidents in the country’s constitutional history have been elected without a contest, this is not unusual. What is unusual this time is that election for the next VicePresident might not be literally along committed party lines. Even though the BJP and its allies can easily ensure Dhankar’s victory, many of the non-Congress and non-BJP parties have also extended support to him. 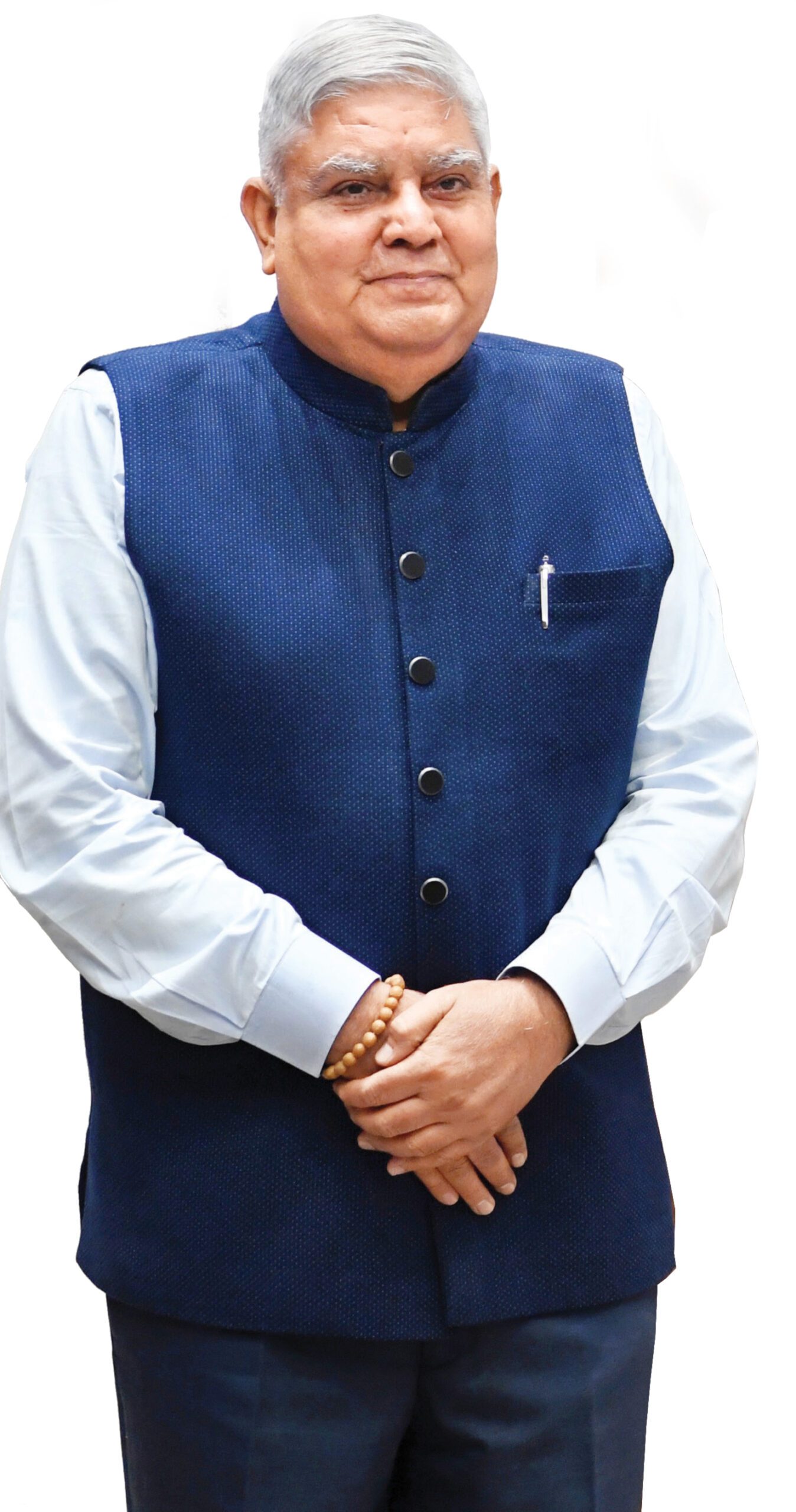 Alva, on the other hand, is seen as a reluctant choice of the principal opposition party Congress, which is finding it difficult to remain in the Opposition space itself. Cross-voting from parties that have supported her, therefore, can’t be ruled out, say BJP strategists.

Both Dhankar and Alva are former Governors who have held high positions in the Government and organisational positions in their respective parties. But the political baggage they carry on their shoulders are different.

Veteran Congress leader Margret Alva is a known critic of the Gandhis and has taken several potshots at the party leadership in her memoir. Her nomination as the Opposition’s vice-presidential candidate is unlikely to go down easily with the Gandhi family.

Dhankar, on the other hand, has served the party without hesitation— his detractors have accused him of acting as a BJP agent as a Governor of West Bengal. He was known as a prominent Jat leader in Rajasthan during the 1990s and the first decade of the 21st century. 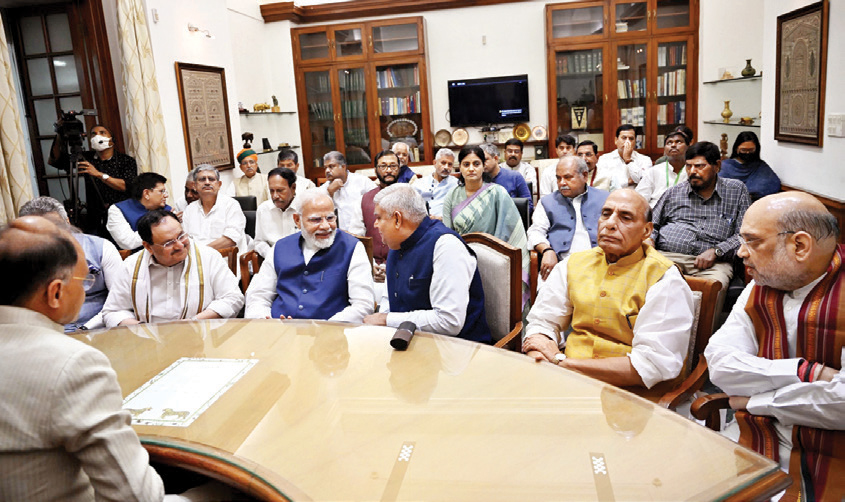 Most political analysts view his nomination as a ‘masterstroke’` by Prime Minister Narendra Modi. After all, he has unearthed a Jat, an erudite and well-liked politician who knows parliamentary procedure and processes well and is bound to succeed as the Vice-President of the Republic.

The move may prove beneficial for the party in the coming Rajasthan state Assembly elections. Jats make up around 15 per cent of the population in Rajasthan. Dhankar’s choice is also meant to woo Jats of Haryana and western Uttar Pradesh, who had distanced themselves from the party during the year-long agitation against the farm laws.

The Vice-President is elected by an electoral college consisting of members of the Rajya Sabha and the Lok Sabha. The nominated members of these houses are also eligible to participate in the voting, which is through secret ballot.

The electoral college has a total of 780 voters (543 from the Lok Sabha and 237 from the Rajya Sabha). One Rajya Sabha seat from Tripura, two seats of Jammu and Kashmir and three nominated members’ seats are currently vacant.

The position is currently held by M Venkaiah Naidu who, since August 11, 2017, is the 13th Vice-President of independent India. 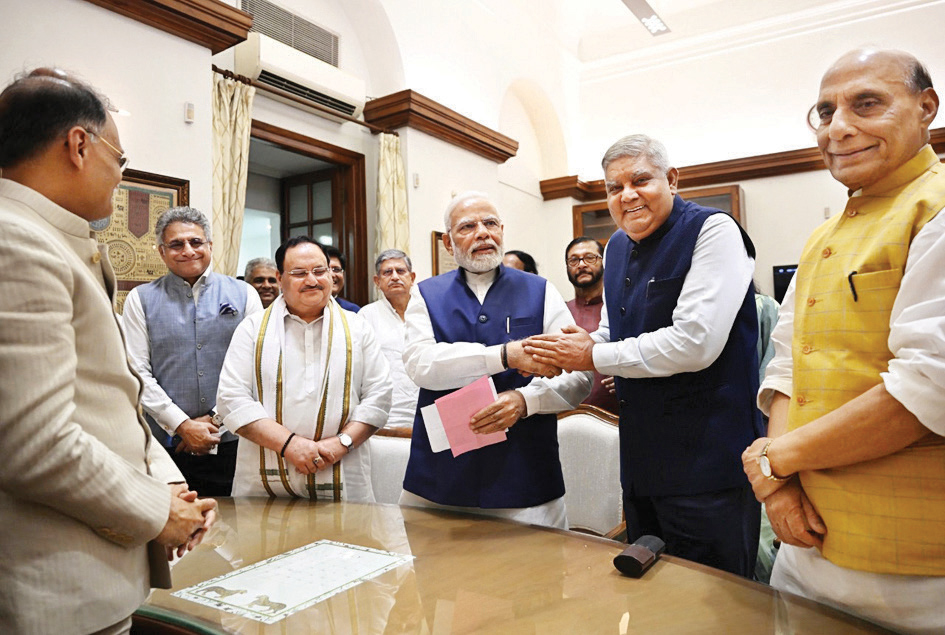 Incidentally, only two VicePresidents have served two terms till date. India’s first Vice-President, Dr Sarvepalli Radhakrishnan served from May 13, 1952 to May 12, 1962. The other was diplomat Hamid Ansari who served from 2007 to 2017. The office of the Vice-President is a unique feature of India, which follows a parliamentary system, and has no exact parallel in other democratic countries, including the Commonwealth.

On December 29, 1948, while adopting the provision regarding the Vice-President, BR Ambedkar, chairman of the Drafting Committee of the Constituent Assembly, spoke of its implications: “Although the Constitution speaks of the VicePresident, he really is the Chairman of the Council of States (Rajya Sabha). In other words, so far as his functions are concerned, he is merely the opposite number of the Speaker of the House of People (Lok Sabha).” 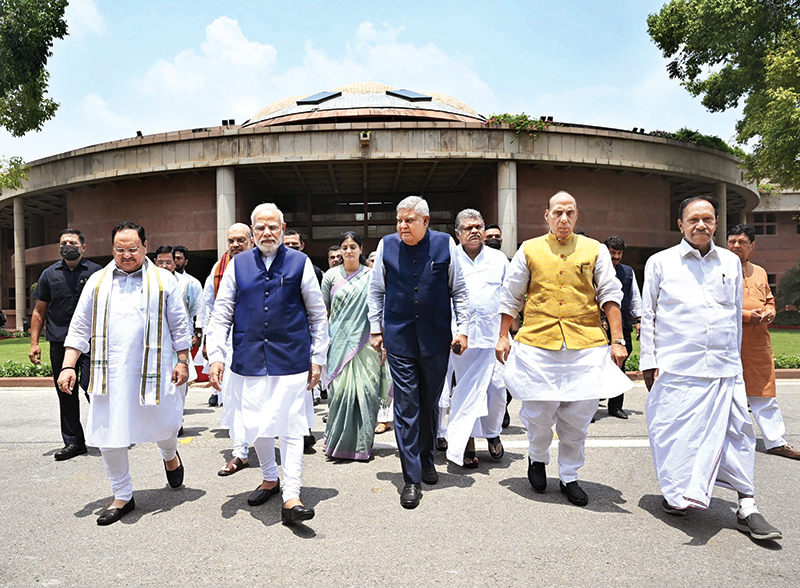 After his victory, Dhankar will have an illustrious predecessor from Rajasthan in Bhairon Singh Shekhawat, who contested as V-P and was a popular and successful Chairman of the Rajya Sabha. A personal favourite of then Prime Minister Atal Behari Vajpayee, Shekhawat, in keeping with his persona, was a friend of all sections of the House and someone many believed would have made a great President.

In the present scenario where the Opposition is so bent on disturbing the sanctity of the Chamber with daily disruptions, Jagdeep Dhankar has his job cut out. It will require considerable dexterity and tact as Chairman of the Rajya Sabha.

The task is not easy. The enormity of the challenge was reflected by outgoing Vice-President M Venkaiah Naidu at an all- party meeting on the eve of the monsoon session of Parliament, the last he would be conducting as Chairman of the Rajya Sabha,

He made a fervent appeal to the members to be “different and better” than they were in the last five years when 57 per cent of the productive time was partly or fully disrupted and some members of the Rajya Sabha had to be suspended for disorderly conduct.

Hailing from a rural farming family, 71-year-old Jagdeep Dhankar first made a name for himself when he was elected to the Lok Sabha on Janata Dal’s ticket from Jhunjhunu in Rajasthan in 1989. A pucca bhakt of the late Devi Lal, the undisputed Jat supremo from Haryana, he became a Union Minister in 1990 serving as Minister of State for Parliamentary Affairs in the Chandra Shekhar Ministry.

Born on May 18, 1951 to a family of farmers in Rajasthan’s Jhunjhunu, Jagdeep Dhankhar was the second of his three brothers and a sister. Like most farming families, Dhankhar’s family too wasn’t financially well off and thus his childhood was one of struggle and hardship.

He used to walk four to five kilometres daily to go to school in his village, before enrolling in Sainik School, Chittorgarh with a full merit scholarship in 1962. He went on to graduate from the prestigious Maharaja College in Jaipur, with a BSc in Physics.

He then completed his LLB from the University of Rajasthan in 1978-1979 and enrolled himself in Rajasthan’s Bar Council. As a lawyer, Dhankhar fought cases primarily related to steel, coal mines, and International commercial arbitration in Rajasthan before moving to practise in the Supreme Court from 1990.

Jagdeep Dhankhar started his career as an advocate in 1979 at the Bar Council of Rajasthan. He became a Senior Advocate, designated by the High Court of Judicature for Rajasthan in 1990.

He was the senior-most designated Senior Advocate of the state till he became Bengal’s Governor in 2019. He practiced in the Supreme Court from 1990 and appeared in various high courts of India. He has also served as the President of the Rajasthan High Court Bar Association. From 1993 to 1998, Dhankhar was also a member of the Rajasthan Vidhan Sabha from the Kishangarh constituency.

He was appointed Governor of West Bengal in July 2019 and had a tumultuous relationship with the ruling Trinamool Congress in the state during his tenure. Dhankar joined the BJP in 2003 and was part of the party’s 2008 Assembly election campaign committee. In 2016, he was the national convener of the BJP’s law and legal affairs department.

No freebie: US has high stakes

India is not starting from the scratch

A spectacle of pragati