Dr Vadrevu K Raju has received manyhonors for his humanitarian work in saving the eyes of the poor not only in India but half a dozencountriesranging from Iraq to America – but the emotions he felt Srinu Muddula, who earned his doctorate in pharmaceutical studies from Rutgers University this year and began working for a major company, and who presented his first pay check to the Eye Foundation of America that Raju started in 1979, was transcendent.

It was in 1979 that Muddula had corneal transplants to both eyes, at the age of 2. His family had travelled to Morgantown, West Virginia, Raju’s home for morethan three decades. The surgery was free andmostoftheotherexpenseswere also born by Dr Raju ,nowit wastime for Muddula to pay himback.“Youfeel blessed whensomething like this happens,” he said,referring to Muddula’sgesture.

Muddula, who attended a fundraiser for the Eye Foundation of America last year whichraised$750,000, declared: “If it wasn’tthe foundation,Iwouldnotbehere.I would not be talking to you. I would have been blind.”
Raju, who is a big advocate of early treatment for eye problems in children, has saved many over the past three decades. “If you catch a child in the first week or first few months of life and do these surgeries, less than an hour’s operation under anaesthesia, you give them 75 years plus,” Raju, who has travelled to more than 50 countries to help people with defective vision, said.

He not only sees hundreds of patients in a day, but also teaches other eye doctors.Ask about his annual vacation, and Rajuthe father of an ophthalmologist daughter and investment banker son finds difficulty in recalling when last he had one. He has forgone many vacations to work with indigent patients, particularly in India. “With each visit, I get my insights improved,” he says. “It is like I am getting a gift. Sometimes trips like this feel better than a holiday.”

The Goutami Eye Institute that he helped establish in Rajamundry in Andhra Pradesh, where he grew up before going to the United Kingdom for higher studies, will also serve as a teaching institute. Its success precedes that of Srikiran Eye Institute in Kakinada that he and his childhood friend, Chandra Sankurathri, established in1993.

Under Raju’s supervision, over 200 ophthalmologists have been trained in advanced courses. Staff members, ophthalmologists and general physicians were introduced to the latest developments in ophthalmology and eye care.The Institute has provided service to more than 400,000 patientsand50,000surgerieshavebeenperformed.Ithas become an autonomous institution, and Raju has raised over $6 million to establish and fund the twofacilities.

“You can never be tired of giving back,” he says. “But to have real success, your intentions should be pure.It is a spiritual act.” His daughter Leela V Raju is now getting ready to spend one month in Andhra Pradesh to help the poor and marginalized people. 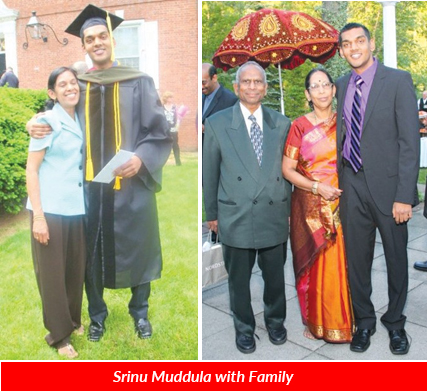 Her father’s humanity and passion stimulates whatever she undertakes, Leela says. “This is not a job for him; it has never been a job,” she says. “He does his work with passion and he enjoys it. His enthusiasm and passion are infectious.”

The many awards Raju has received include the American Academy of Ophthalmology’s Outstanding Humanitarian Service Award for his contributions to the medical profession; the Distinguished Community Service Award given by American Association of Physicians ofIndian Origin (AAPI); and the Martin Luther King award from West Virginia University Center for Black Culture. He is also the chairman of the ‘prevention of blindness’ committee of the Association of AmericanPhysiciansIn addition to his busy practice and philanthropy Raju, who specializes in corneal and refractive surgery, loves teaching. “Whether I am in a classroom at a university or teaching a group of doctors, I feel I am giving out more than medical knowledge,” he says. He is currently a clini- cal professor of ophthalmology at West Virginia University, where he has been teaching since 1976. Students there rate him as not only being innovative and knowledgeable but also approachable.

A lot of his charity work is helped by some of his former patients, and in a spectacular case by young entrepreneur Jay Reddy. “When Jay was studying at the university, he had come to me for a check up,” Raju recollects. “I don’t usually take money from students. I ask them to make a small contribution to my charitable work.”of Indian origin.

Jay Reddy never forgot the gesture; in the interveningyears he has contributed over $250,000 to Raju’s charities.Raju says he feels fulfilled thanks to his association with the Eye Relief Project, in which he travels periodically toIndia and other developing countries to volunteer his sur-gical services and teach advances in ophthalmology. In America, he has conducted surgeries at the Native American settlements in Arizona and New Mexico.“Each day when I get up, I remindmyself that I should make a difference,”thesoft-spokenRajusays.

From his West Virginia base,Raju conducts approximately 25 corneal transplants annually; 300 to 400 cataract surgeries; and handles 7000 to 8000 patient visits. DoctorsinAmericahavetoomany comforts, he complaints. “There is anemptinessinmanyofus,thereis also an intellectual poverty,” hesays. “Someofthiscanberelievedbyvoluntary service. We have so much potential to help othersand in doing so, we may be helping ourselves much more thanothers.”

Part of the reason he is conscious of the need for humility in whatever he does is because of the Gandhian influence on him.

Raju’s camps are funded through donations by philanthropists and American pharmaceutical companies. Physicians donate theirservices without receiving fees. Raju estimates that he has spent over half- million-dollars plus in sophisticated equipment, with the objective of providing world -class eye care to theneedy.

Here, I realize that if I do not perform a surgery, it’s probablybecausethepatientisseekinganothersurgeon or getting the procedure done at a later date,’ he said in an interview. ‘In rural India, if I don’t perform the surgery, I know in my heart that a person, possibly a child, may live a life ofblindness.’Dr Raju has transcended his knowledgeintoavisionthatoffersnotonlyeyesighttomany,but hope, aswell.’