Prime Minister Narendra Modi is an unparalleled election campaigner with indomitable energy. He never gets rattled by his opponent’s attacks. Instead, he has the uncanny ability to come out with powerful polemics, at the spur of the moment, which can slice his rivals apart, thus turning all bouncers into sixers.

On the campaign trail in Gujarat, while addressing an election rally on November 21, in Surendranagar district, where votes will be cast on December 1, in the first of the two-phase polls, Modi was at his rhetorical best. While responding to the Congress leader Madhusudan Mistry’s remark that “Modi ko uski aukat dikha denge,” the Prime Minister feigning anger, yet full of wit, replied with a backhand volley: “Look at their ahankar (arrogance).”

Using humility as a weapon, in Dhrangadhra, in Surendranagar, Modi while listing all the past insults said: “You are all royal family, but I am from a normal family. I am a sevak and sevadar and have no aukat. You call me neech jati, neechpan, maut ka saudagar, gandi nali ka keeda…. and now you have come to show me my aukat. I have no aukat.”

Modi’s polemical flourish made Mistry’s “aukat” remark boomerang, ripping the Congress leader right through the middle. A red-faced Mistry will live to regret the day he uttered “aukat,” since it could prove as costly for the Congress campaign, as Congress leader Mani Shankar Aiyar’s, classbiased remark, describing Modi during the 2014 Lok Sabha election “as a chaiwallah.”

Blessed with powerful oratorical skills, Modi dexterously chooses the right cultural symbols and the apt agenda that finds resonance with the audience. Selecting Maa Narmada (the river) as the cultural symbol Modi declared: “Neither Modi, nor Bhupendra (Gujarat CM Bhupendra Patel) is contesting the elections. It is the people, mothers and sisters of Gujarat who are in the fray. Today, in Surendranagar district, it is natural to remember Maa Narmada.”

Since BJP has been the incumbent in Gujarat for three decades, Modi underlined his agenda of development by asking a series of questions: “Shouldn’t development be talked about in the elections?” “Who did how much work?” “We are ready to give hisab (account).” Congress, Modi said is not ready to talk vikas, only about my aukat.

Attacking Bharat Jodo Yatra, Modi lashed out at Rahul Gandhi, and environmentalist Medha Patkar: “Think about those who have been removed from padh (position of authority). Such people are doing yatra for padh now. In a democracy, they can do yatra for padh, but those who kept Gujarat thirsty, those who stopped Maa Narmada from entering Gujarat, stalled the project for 40 years due to court cases. The people of Gujarat will punish those who do padhyatra while walking with hands across the shoulders of Narmada protesters.” 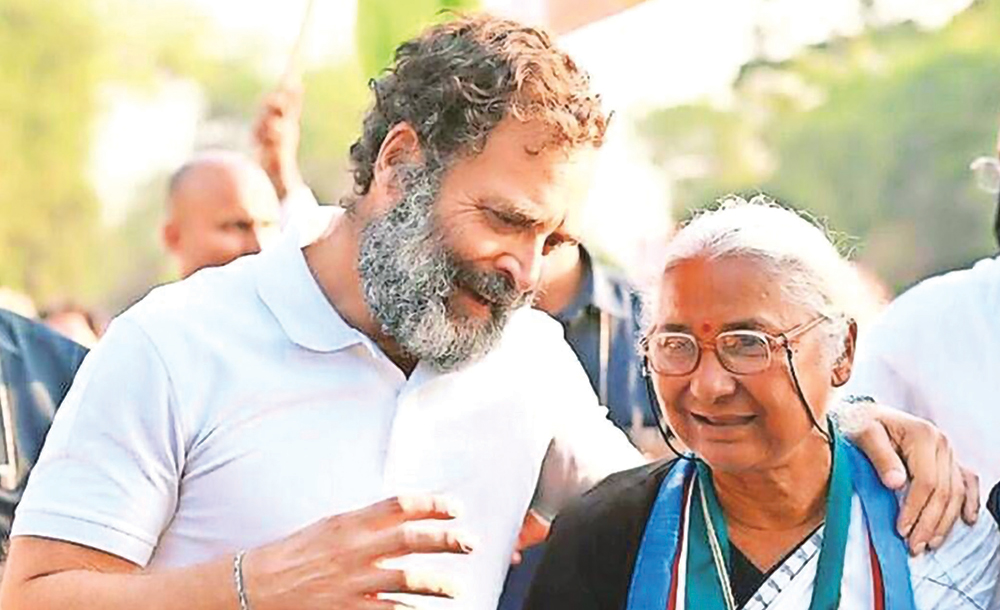 Campaigning in the tribaldominated Dahod town of central Gujarat, Modi asked why the Congress did not support Droupadi Murmu in the presidential election if the opposition party was so concerned about Vanvasis (tribals).

This was a direct retort to Rahul Gandhi’s speech in the tribaldominated Mahuva village, in Surat district, where Rahul used the dual distinction between `Adivasis’ and `Vanvasis’ (see page 12, the Rahul Resurrection?).

Hitting a sixer to Rahul’s yorker, Modi said “A person while conducting a foot-march to get back power talks about tribals. My question to him is, why the Congress did not support the BJP’s woman tribal candidate in the presidential election? Instead, they fielded their candidate to defeat her, Why?”

In Bhavnagar, Modi informed the voters: “I want to make Gujarat the biggest hub of green hydrogen (in the world). A new eco-system for that sector will come up on Gujarat’s coastline, either in Kutch or Bhavnagar or Junagadh. Cars will run on Green hydrogen, the fuel of the future. The entire world will experience a total transformation.” We are asking for votes for Vikas, Congress is only showing me my aukat, he asserted.

Modi declared that VedantaFoxconn’s mega semiconductor plant is coming up in the Dholera Special Investment Region, in the Ahmedabad district, with an investment of Rs 1.5 lakh crore.

Listing such achievements and highlighting such development plans for the future to buck the fierce antiincumbency against the BJP state government, Modi raised the issue of voting for Vikas