Developing together as equals

Nigeria is the most populous state in Africa with over 212 million people. Besides, its vast size, abundant crude oil reserves and pre-eminent position among the 15-member organization, the Economic Community of West Africa States (ECOWAS), make Nigeria a giant state.

India’s relations with Nigeria date back to the early 19th century when both were fighting against the British colonial rule and the system of indentured labour migration led to an informal relationship between their people.

After its independence in1947, India established its first Diplomatic House in Lagos in 1958, two years before Nigeria became free in 1960. Since then, bilateral cooperation between India and Nigeria has flourished in diverse sectors.

At present, Nigeria is India’s largest trading partner in Africa. Indian owned/operated companies are estimated to be the second-largest employer in Nigeria after the Federal Government of Nigeria. Nigeria-based ethnic Indians are economically active in areas relating to manufacturing and retailing of consumer goods, construction and air services.

At the India-Nigeria Business Forum organised in Abuja by the Indian High Commission in 2020, Ms Victoria Akai, Director General of the Abuja Chamber of Commerce and Industry (ACCI), observed that “India has provided critical support to Nigeria in areas like agriculture power, automobile, pharmaceuticals, air travel among others.”

At present, Nigeria is India’s largest trading partner in Africa. Indian owned/operated companies are estimated to be the second-largest employer in Nigeria after the Federal Government of Nigeria

Nigeria is a major importer of Indian goods in West Africa such as machinery, automobiles and accessories, pharmaceuticals, mineral fuels and mineral oils, organic chemicals, and textiles. There are 135 Indian companies — including Tata, Kirloskar, Ashok Leyland, Ranbaxy, Bharti Airtel and Mahindra group— that are active in Nigeria.

Petroleum, petroleum products and related materials accounted for around 57 per cent of India’s total imports from Nigeria, which is the 11th largest producer of crude. As regards the gas reserves, Nigeria ranked 8th in the world. The state-owned Nigerian National Petroleum Corporation (NNPC) accounted for more than 50 per cent of oil production and over 40 per cent of its gas supply. Nigeria is a leading energy partner in India. Major power and transmission sectors in Nigeria are dominated by Indian companies. The evolving cooperation between India and Nigeria in renewables has also shown remarkable progress.

In 2017, Nigeria became the signatory of the International Solar Alliance (ISA) and continues to remain an active member in achieving eco-friendly and technology-driven sustainable development. The ‘Nigeria Economic Sustainability Plan’ released on June 25, 2021, has set a target to install solar home systems in five million households, serving about 25 million people who are not yet connected to the national grid.

Clearly, there are immense opportunities for India to push forward its own domestic companies such as its Navratnas and hi-tech firms to invest in Nigeria’s untapped energy and power sector. Therefore, the ISA and similar alliances may act as ambrosia for India’s quest to reduce its vast dependence on energy and petroleum products from the geopolitically unstable regions such as West Asia.

In the defence sector, India supported Nigeria in setting up various military institutions, including the Nigerian Defence Academy (NDA) at Kaduna, the Naval College at Port Harcourt and Command and Staff College, Abuja.

Similarly, a number of Nigerian defence services officers have received training in India. These include former Nigerian President Olusegun Obasanjo, Ibrahim Babangida and the present President Muhammad Buhari. President Buhari is an alumnus of Defence Services Staff College (DSSC), Wellington. In October 2007, both the countries signed a memorandum of understanding on defence cooperation. In March 2021, India and Nigeria had the first Strategic and Counter-Terrorism Dialogue at the National Security Advisor level. India’s commitment to the people of Nigeria was also evident through its vaccine diplomacy during the Covid-19 pandemic.

In his recent book Nigeria-India Relations in a Changing World, Sharkdam Wapmuk has underlined how India and Nigeria worked with the spirit of “developing together as equals”. Greater connectivity and people-to-people contact, cooperation between universities and think-tanks will go a long way in further strengthening the relationship between the two countries.

The African continent first engaged in trade integration after independence, with the establishment of the Organisation of African Unity (OAU) in 1963 comprising 32 countries. In the initial years, the purpose of the integration was largely political. Over a few decades, commercial and economic interests gained prominence, with the aim of nurturing self-reliance for the African continent. 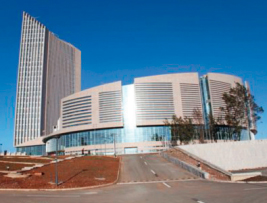 In terms of bilateral trade, the African Union is one of India’s largest trading partners after the United States (US), China, and the United Arab Emirates (UAE).

Within the African Union, ten African countries account for 60% of India’s total trade with Africa, with Nigeria at the top (21%).

The formation of the African Continental Free Trade Area (AfCFTA) in 2018 widened the window for trade with African Union members. It entered into force in May 2019 and trade under AfCFTA began on January 1, 2021.

The scope of AfCFTA covers tariff reduction, removal of non-tariff barriers, and the promotion of the free movement of people and services. It is one of the world’s largest free trade areas with a market economy of nearly 1.2 billion people.

Though much of India’s trade is with Nigeria and South Africa, India has trade linkages with other smaller African countries as well. Over the recent decades, India’s trade with Africa has become more diverse. There has been a shift in India’s export basket to the continent, from textile yarns to petroleum products, pharmaceutical products, chemicals and manufactured products. At the same time, India’s import basket, though dominated by primary products and natural resources, is still diverse given the wide natural resource base in Africa.

In terms of India’s outward investments to Africa, between January 2015 and May 2021, a total of $23.3 billion has been invested from India to Africa. The majority of the investments are in the services sector – and within this, most can be attributed to the bilateral tax treaty between the two markets. These trade and investments links can be strengthened under the AfCFTA.