The Modi Tsunamo in Gujarat

In the Blitz India November 14-20 (Vol.1 No, 41), I had written an article on the Gujarat Assembly polls predicting “Advantage BJP.” I had firmly concluded that the Gujarat Assembly elections had a foregone conclusion and that the seventh consecutive imminent victory of Gujarat was due to a long-term pattern of “electoral realignment” (See BlitzIndia Impact). We were proved right but the emphatic nature of the Bharatiya Janata Party’s victory even caught us by surprise.

record of 1985 In a monumental mandate for Prime Minister Narendra Modi, the BJP has swept the Assembly elections in Gujarat with 52.5 per cent popular votes, bagging an unprecedented 156 out of 182 seats, defeating both the Congress Party and the Aam Aadmi Party. The Opposition has been devastated in Gujarat, with the Congress managing to win only 17 seats and the AAP winning merely 5, with 4 for others.

The BJP’s 2022 tsunamic victory in Gujarat bettered its previous record when under the leadership of the then Chief Minister Narendra Modi, the BJP had won 127 out of 182 seats in 2002. 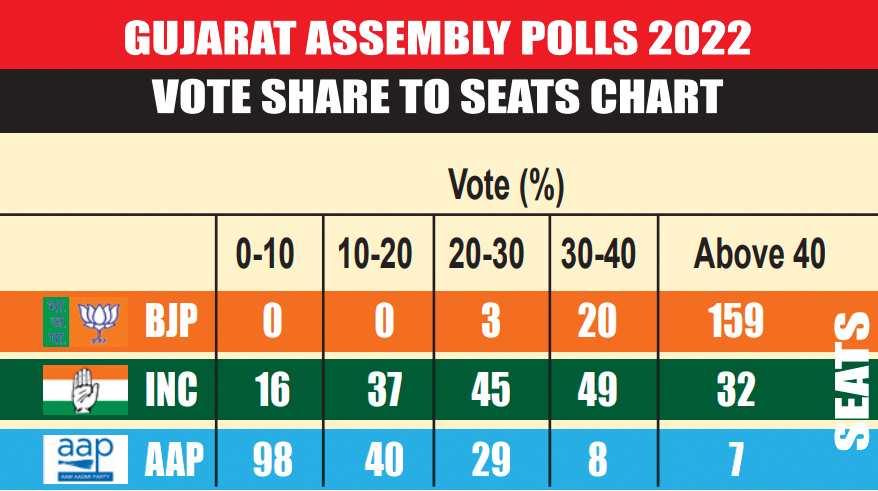 The BJP’s emphatic victory today breaks the previous record in Gujarat when the Madhav Singh Solanki-led Congress had won 149 seats in 1985 applying the (Kshatriya, Harijan, Adivasi and Muslim coalition) KHAM strategy. However, Solanki’s percentage vote at 55.6 per cent in 1985 (on the coattails of the 1984 Lok Sabha record of Rajiv Gandhi winning 404 out of 514 seats plus 10 seats in the delayed election) remains a record that is still unbroken. The Congress which under Solanki had become the dominant party in Gujarat has fallen from grace. Slipping down from the dizzying heights of glory under Solanki, the Congress Party has lost seven elections in a row and is now reduced to merely 17 seats and 27.3 per cent popular vote (less than 50 per cent of its own Solanki record). This downfall of Congress in Gujarat is a shocker given that it won 77 seats (against the BJP’s 99) in just 2017.

Given that the BJP has won seven consecutive elections since 1995, the victory is a momentous one. To use the pollsters’ language, the victory of the BJP heralds a long-term pattern of “electoral realignment” for the ruling party, “a decisive, durable and significant shift in voting behaviour,” which is bound to last over three decades.

The other examples of such a historic realignment in the past were when the Left Front, under the leadership of the late comrade Jyoti Basu and later Buddhadev Bhattacharjee, had won seven consecutive elections in the state of West Bengal between 1977 and 2011, for 34 years. Naveen Patnaik’s over 22 years of rule in Odisha, and Nitish Kumar’s 17 years in Bihar, are other examples of electoral realignment.

Why did BJP win a landslide? Why did Congress fall from grace? Why did AAP fail to make a serious inroad despite securing a 13 per cent vote?