What has changed the political scene so dramatically in Gujarat since 2017? How did the 2017 competitive Assembly election between BJP and Congress turn out to be the tornado of 2022? How did the anti-incumbency in Gujarat against the sitting MLAs and the chief ministers (previous BJP CM Rupani was replaced on September 12, 2021 by Bhupendra Patel) suddenly turned to incumbency advantage in this election?

30 rallies and 2 roadshows by Modi

The main reason is the blitzkrieg nature of the campaign by Modi who highlighted the Gujarati Asmita during his 30 rallies and two spectacular roadshows. On November 6, campaigning in Valsad, Modi gave the slogan of Aa Gujarat, mein banavyu chhe, (We have made this Gujarat). The slogan in Gujarati with Modi’s masterly delivery mesmerised the crowds which erupted with raptures.

Modi’s barnstorming across Gujarat connected with all types of voters – Patidars, OBCs, tribals, SCs and upper castes. Modi’s stunning electoral campaign caught the political imagination of the Gujarati voters. Since Gujarat catapulted Modi into political prominence as CM for 15 years in a row and later as PM with massive majorities, the Gujarati voters ensured in this extraordinary assembly election, with their support and vote, that their iconic modern-day hero walks unchallenged into his third-term as PM with an overwhelming majority. Gujarat is foreboding for the 2024 Lok Sabha election. 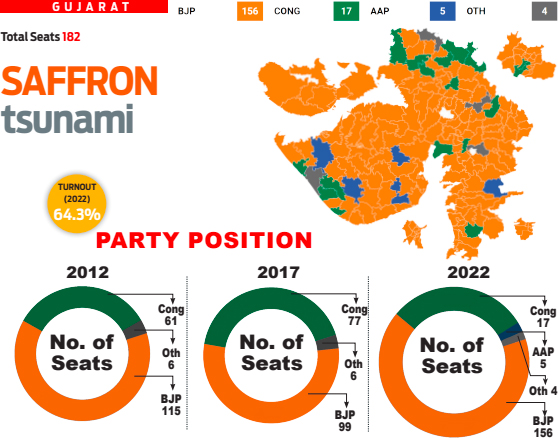 The galloping growth of Gujarat Second, the phenomenal success of the Gujarat model, an unparalleled story of galloping growth, ignited by Modi, since he became CM of Gujarat. Consider some basic data about Gujarat. With 5 per cent of India’s population, and 6 per cent of the nation’s land mass, Gujarat accounts for almost 8 per cent of India’s GDP and 25 per cent of the country’s exports. Gujarat outperforms most Indian states economically and from 2014 have begun punching much more than its weight politically.

In terms of GSDP, Gujarat has averaged 10 per cent growth, for 20 years (preCorona pandemic). If Gujarat were a country, this would be one of the fastest economic growth rate stories comparable to China and South Korea. Moreover, the gushing growth of Gujarat seems to have touched all sectors: agriculture surging at 8 per cent, and manufacturing and services at even higher rates, thereby boosting exports via Gujarat’s 1,600 km of coastline. The revolution in milk production is as well-known a story as the success of Sabarmati waters for irrigation, the Bt cotton seeds, 24-hours of electricity for farmers and the boost in agricultural productivity as a result of market-oriented policies (not state support as in the Green revolution story of Punjab and Haryana). 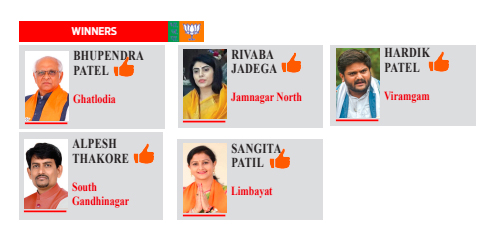 Gujarat has served as an integral native trading hub for centuries, the most dynamic in the Arabian Sea, which carried out maritime trade with East Africa, the Middle East especially the Persian Gulf countries, before the arrival of the European colonials. Modi transformed Gujarat’s fortune by making it the seventh richest big state in India in 1980-81 into the second richest industrial state in the country today.

What caused the Congress collapse in Gujarat? A key reason was the two-horse race in 2017 turning into a three-cornered contest, where AAP’s almost 13 per cent vote in 2022 was yanked from the Congress’s previous kitty. United we stand, divided we fall explains how both the Congress and the AAP ended up performing miserably despite an interesting contest in some urban pockets of Gujarat. Finally, the entire top leadership of the Congress must be blamed, including Rahul Gandhi, who was busy with the top leaders in the Bharat Jodo Yatra, almost forgetting the state (except for a brief appearance), surrendering the election even before the votes were counted.

India emerges as a global powerhouse