SKY is the limit

NEW DELHI: Suryakumar Yadav’s recent form with the bat augurs well for Team India for the World T20, which is to be played in Australia from October 16 to November 13. His ability to innovate and play unorthodox shots has earned him the nickname of ‘SKY’. He can hit any shot in the arc, something very few batsmen are capable of.

Surya has an enviable record – he is among five Indian batsmen who have scored a century in a T20 international, when he scored 117 off 55 balls in June this year against England. He also scored a half century on his debut, yet things were far from rosy for Surya as he had to endure 11-year wait to debut for Team India. Despite his prolific scores at the domestic level, he had to make drastic changes; including changing his diet and altering his batting technique before donning the India colours at the ripe age of 30. 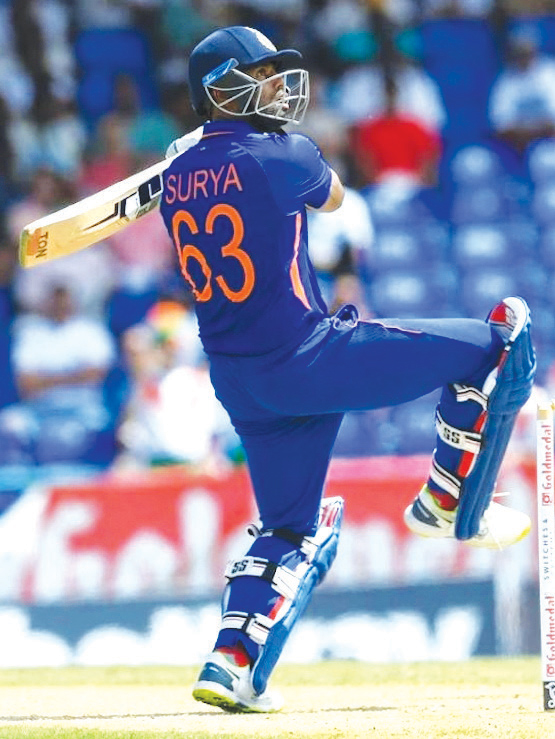 Statistics reveal the class and pedigree of a batsman. In Surya’s case, it is very clear that since making his debut in 2011, he remains India’ s highest scorer in T20s with 758 runs in 23 innings. What takes the cake is his phenomenal strike rate, which is a mindboggling 177.51. Compare this to Virat Kohli, whose strike rate is 138.37 and Rohit Sharma (143. 3), and that’s when one realises the importance of Surya Kumar in Team India.

Surya’s fearless brand of cricket — he scored a six off the very first ball that he played in international cricket – is like a whiff of fresh air. Combine this with his arsenal of unorthodox shots and we have a match-winner in him.

Surya’s pyrotechnics with the bat have won him a lot of accolades. According to a former national selector, Suryakumar’s strength lies in his ability to play unconventional shots. “The sheer variety of unorthodox shots he possesses is nothing short of an asset. He has the uncanny ability to find the angles and shots with his bat which can confuse the best of teams,” he said. A closer look at Surya’s shots gives one the impression that he has played a lot with soft balls. He admitted recently that he used to practice a lot with the rubber balls earlier in his career. Rubber balls, being more bouncy, travel much faster thereby enabling one to improve one’s reflexes.

There is one factor which might go against Surya in the World T20 – he has never played in Australia and would be playing in totally alien conditions. That, however, does not deter him as he says he has spoken to his Mumbai Indians captain Rohit Sharma, who has briefed him about the conditions there. Everyone is hoping that SKY remains the limit for Suryakumar in Australia, as it has been everywhere else.

Know your duties: NEHU V-C tells youth at a lecture on Modi book