The voice lives on

Lata’s songs were for every mood—joy, sorrow, patriotism and societal angst

Not many artists get a mass Nfollowing and critical acclaim. Lata Mangeshkar was one of those few singers who were loved by hoi polloi as well as the cognoscenti.From the man in the street to Bade Ghulam Ali Khan—everyone lauded and applauded her. Clichéd as it may sound, but her demiseonFebruary 6 atthe age of 92has left a void in the world of Indian music that would be difficult toll.

Unsurprisingly, she was showered with as fulsome praise aer her death as she was felicitated during her lifetime. She received almost every award and honour that any artist can dream of: the Dadasaheb Phalke Award (1989), the Bharat Ratna, the country’s highest civilian honour, three National Film Awards, 15 Bengal Film Journalists’ Association Awards, four Filmfare Best Female Playback Awards, two Filmfare Special Awards, the Filmfare Lifetime Achievement Award, and many more. Even France bestowed on her its highest civilian award, Officer of the National Order of the Legion of Honour, in 2007. 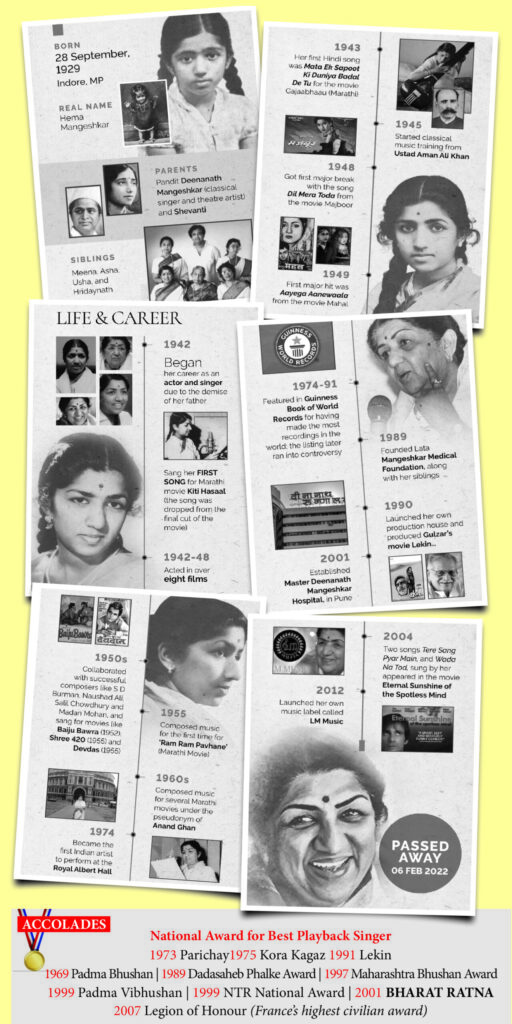 Not for nothing was she called the Nightingale of India, Voice of the Millennium and Queen of Melody. She sang in dozens of Indian languages, though most of her thousands of songs were in Hindi, Marathi, and Bengali: she was the voice of the nation.

Her songs were for every mood and feeling—joy and sorrow, togetherness and love lornness, life’s serenities and vicissitudes, patriotism and social involvement. Right from the 1940s, her voice has expressed the variegated feelings and thoughts of the entire nation.

While Lata Mangeshkar was lucky in career, she was not so much in love. She never married, but that was not because men were not interested in her Many of them—all of them important persons—did but somehow she was not destined to tie the knot.

She is said to have had a romantic relationship with a former royal, Raj Singh Dungarpur, who later became the chief of the Board for Control of Cricket in India (BCCI). But his father came between the two.

Lata is known to wear a golden bichhua, an ornament adorning the foot ngers. Typically, a golden bichhua is worn by married women. When someone pointed that out to her, she reportedly replied that she wore it to tell the world that gold had little importance for her and that she regarded it good only for her feet.

Her songs were for every mood and feeling—joy and sorrow, togetherness and love lornness, patriotism and social involvement. Right from the 1940s, her voice has expressed the variegated feelings and thoughts of the entire nation.

She was also supposedly romantically linked with many other men—mainly musicians. Pt Husnlal (of the HusnlalBhagatram duo), C Ramchandra, Jaikishan(oftheShankar-Jaikishanteam). Evidently, her failures in romantic liaisons didn’t have any adverse effect on her singing. She continued to sing with legendary singers like Mohammad Ra, Kishore Kumar, Hemant Kumar, Manna De, Talat Mahmood, and Mukesh. She sang for almost every major music director from Naushad, SD Burman, Roshan, Ravi, and Shankar-Jaikishan to Laxmikant-Pyarelal, RD Burman, and Uttam Singh.

Lata Mangeshkar is dead, but her voice will live forever.

EFA initiatives for a healthy world

EFA initiatives for a healthy world

Regulation is need of the hour